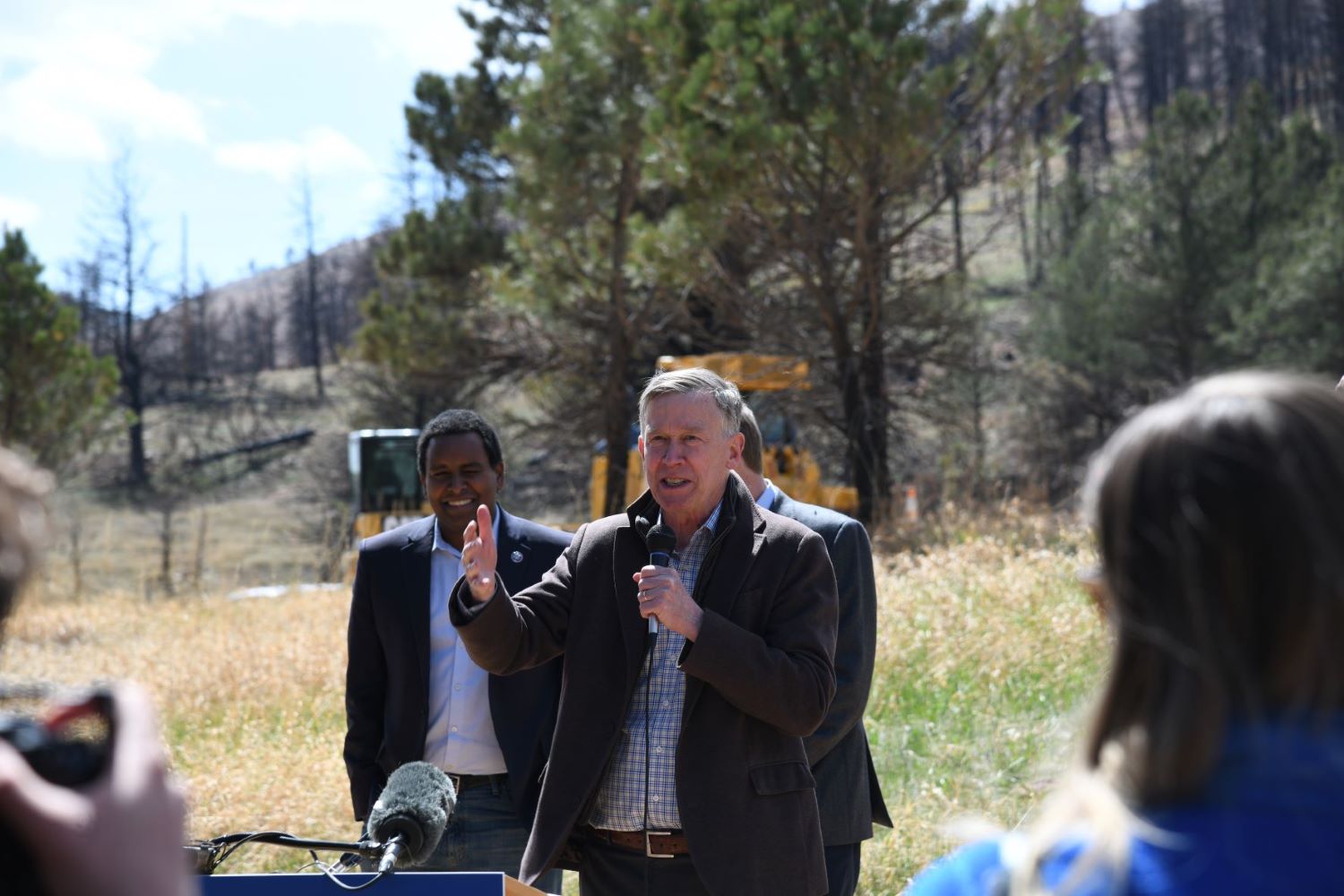 U.S. Sen. John Hickenlooper, former governor of Colorado, talks about past and future challenges and the importance of funding to address wildfire risk across the West. (Photo Credit: Patt Dorsey)

Lawmakers and Colorado state and federal agency leaders personally thanked the NWTF for the organization’s leadership on Capitol Hill and its role in the development and passage of the Bipartisan Infrastructure Law, which will help fund wildfire mitigation efforts over the next decade.

USDA Secretary Tom Vilsack’s office, Forest Service Chief Randy Moore, Sen. Michael Bennett and other Colorado lawmakers recognized the NWTF’s ongoing support of the legislation and praised the nonprofit for its stewardship agreements with the Forest Service across the country.

Tom Spezze, NWTF national director of field conservation and state policy, and Patt Dorsey, NWTF director of conservation operations in the West, attended Monday’s announcement, which took place at the burn scar site of the Calwood Fire of 2020, just west of Boulder, to support the launch of the Wildfire Crisis Strategy.

“We are pleased to see the Wildfire Crisis Strategy being implemented so swiftly and robustly,” Spezze said. “This initial work will significantly minimize the threat of catastrophic wildfire to our forests and communities, and it will bolster the NWTF’s Four Shared Values of clean water, healthy forests and wildlife habitats, resilient communities and robust recreational opportunities. We support the Forest Service’s efforts and are ready to get to work.”

The NWTF has been a leader among conservation organizations on Capitol Hill in the early drafting phase of the Bipartisan Infrastructure Law. Since the passage of the once-in-a-lifetime legislation, the NWTF has worked side-by-side with the Forest Service and has had direct involvement in the Wildfire Risk Reduction Implementation Strategy Team at the national level and in the development of the Wildfire Crisis Strategy across all western Forest Service regions.

Funds from the Bipartisan Infrastructure Law will allow the Forest Service to amplify its efforts with other land-owning federal agencies, conservation partners — like the NWTF — tribes, states and local communities to work across boundaries and make a landscape-level impact to combat  catastrophic wildfires in the West.

Monday, the Forest Service outlined the initial phases and implementation of the work, including wildfire reduction treatment on 10 priority landscapes in Arizona, California, Colorado, Idaho, Montana, New Mexico, Oregon and Washington.
In Fiscal Year 2022 alone, the Forest Service plans to invest $131 million in fuels reduction implementation, which will equate to 208,000 acres of catastrophic wildfire mitigation.

Landscapes within the Rocky Mountain Restoration Initiative, a partnership co-convened by the NWTF and the Forest Service, were identified by partners early in the crafting of the Wildfire Crisis Strategy and are now included in both the initial and future investments. Moreover, at Wildfire Crisis Strategy meetings and roundtables, RMRI is being pointed to as a model for how to implement shared stewardship conservation delivery on a landscape scale.