NASHVILLE, Tenn. – Steve Barnett has long been involved in wild turkey management through his work at the Alabama Division of Wildlife and Freshwater Fisheries, and the National Wild Turkey Federation 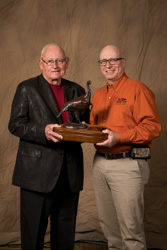 recognized his efforts with a national award.

“I feel extremely excited, honored and thankful to the NWTF Board of Directors,” Barnett said. “Without a doubt, my individual recognition is the result of a team effort.  As a wildlife biologist and passionate turkey hunter, I encourage all of us to continue to do great work for wild turkeys to ensure spring mornings are filled with the gobbles of this majestic bird!”

The NWTF named the Mosby award for Henry S. Mosby, Ph.D., whose research during the mid-1900s set the standard for wild turkey management. He also helped found The Wildlife Society and won its highest honor, the Aldo Leopold Medal.

Throughout Barnett’s distinguished career in wildlife conservation, he has worked for the betterment of the wild turkey. Since 2014, he has served as chairman of the state’s Wild Turkey Committee, working to address Alabama’s wild turkey management. In 2009, Barnett was the primary author of the ADWFF’s “The Wild Turkey in Alabama” book.

He also has written more than 100 articles for print and online outlets, assisted in the development of wild turkey research using game cameras, worked on the wild turkey incidental brood survey used by state biologists and worked with the Alabama NWTF State Chapter for the acquisition of approximately 40,000 acres for wildlife management and special opportunity areas.

“The NWTF is fortunate to have individuals like Steve who dedicate their lives to the conservation of wildlife and habitat,” NWTF CEO Becky Humphries said. “We are proud to honor him with this award and look forward to continuing to partnering for Alabama’s wild turkey population.”

When the National Wild Turkey Federation was founded in 1973, there were about 1.3 million wild turkeys in North America. After decades of work, that number hit a historic high of almost 7 million turkeys. To succeed, the NWTF stood behind science-based conservation and hunters' rights. Today, the NWTF is focused on the future of hunting and conservation through its Save the Habitat. Save the Hunt. initiative – a charge that mobilizes science, fundraising and devoted volunteers to conserve or enhance more than 4 million acres of essential wildlife habitat, recruit at least 1.5 million hunters and open access to 500,000 acres for hunting. For more information, visit NWTF.org.