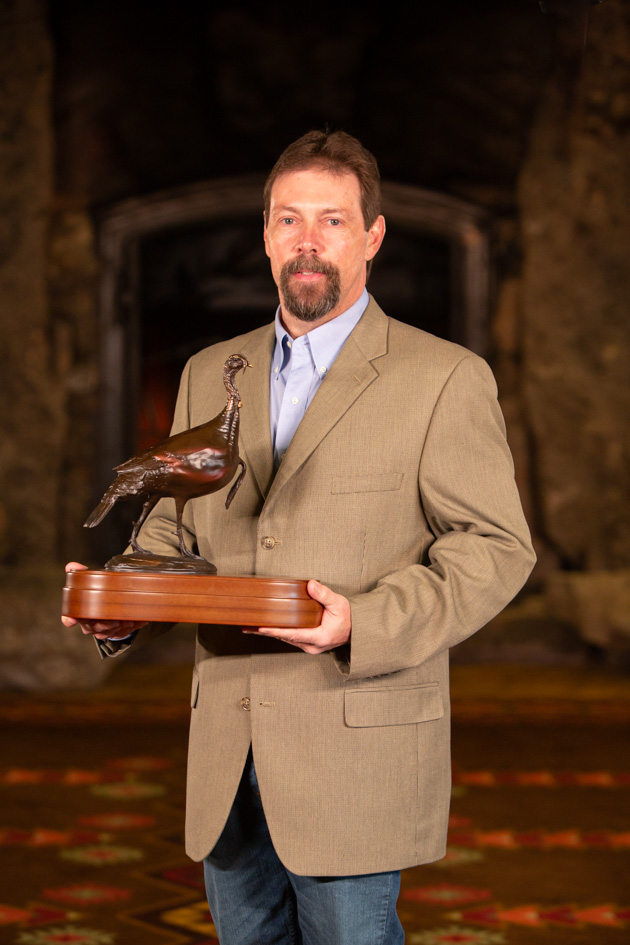 EDGEFIELD, S.C. – Mike Chamberlain, Ph.D., Terrell Professor of Wildlife Ecology at the University of Georgia, received the National Wild Turkey Federation’s Tom Kelly Communicator of the Year Award for his partnership with the NWTF and his desire to educate and engage the turkey hunting and conservation community.

“It is indeed gratifying and humbling to receive the Tom Kelly Communicator of the Year Award,” Chamberlain said. “Having conducted science on wild turkeys for many years, it's exciting to be able to communicate the relevance of that science to turkey hunters and have them appreciate it. I sincerely appreciate the people that follow me on social media and other forums; their enthusiasm is infectious and makes my job enjoyable. Thanks to NWTF for recognizing me with such an award. I am forever grateful.”

Chamberlain accepted the award during the NWTF’s 45th Convention and Sport Show, held virtually in 2021.

This award, named for turkey hunting poet laureate and longtime NWTF advocate Col. Tom Kelly, recognizes a communicator who has done an outstanding job of sharing the NWTF’s role in the wild turkey restoration story. Formerly known as the Communicator of the Year award, the NWTF renamed the accolade in 2018 to honor Kelly.

In an attempt to provide engaging, digital content for its audience during the onset of the COVID-19 pandemic, the NWTF conceptualized the Facebook Live series “Cocktails and Conservation,” where Chamberlain; Bret Collier, Ph.D.; and NWTF Director of Development Jason Lupardus discussed various topics about the wild turkey, including nesting and brooding research, prescribed fire, turkey behavior, the effects of hunter interactions on wild turkeys and more.

The “Cocktails and Conservation” series promoted a causal learning environment where viewers could have a beverage of their choice, learn about wild turkey ecology and ask questions.

“Mike’s genuine desire to share his love and knowledge of the wild turkey is evident in all he has done for the NWTF,” NWTF CEO Becky Humphries said. “Mike’s effective ability to explain the science of ecology to a wide audience reiterates he is truly a great educator.’’