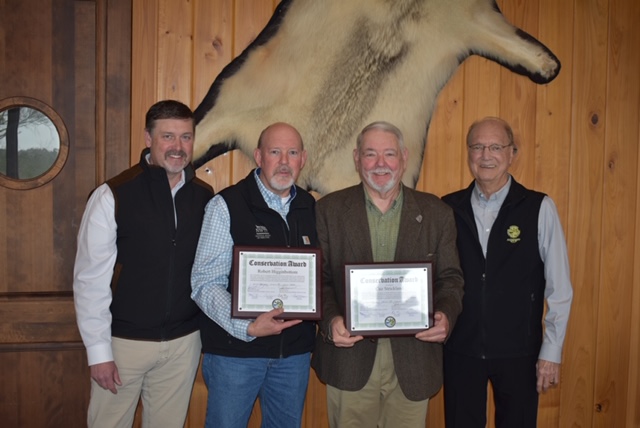 MDWFP Commissioner Robert Taylor and MDWFP Executive Director Dr. Sam Polles presented the Conservation Award to Higginbotham in his hometown of Louisville, Mississippi, for his achievements as a sportsman and promoter of wildlife and natural resource conservation and outdoor recreation. Hunting legend Ronnie “Cuz” Strickland also received recognition from MDWFP for his dedication to the outdoors.

“What an absolutely humbling honor to be mentioned in the same sentence as Cuz Strickland and to receive the Conservation Award presented by MDWFP Commissioner Robert Taylor,” Higginbotham said. “I am proud to accept on behalf of all NWTF volunteers.”

Higginbotham has been involved with the NWTF since the early ‘80s. He is the founder of his local East Mississippi Chapter and has served as chapter president and banquet chairman. Higginbotham was elected to the NWTF national board in 2008.

“Robert’s decades of service to the NWTF serves as a prime example of NWTF volunteerism,” NWTF CEO Becky Humphries said. “We are proud to have Robert as a member and vice president of our national board.”

About the National Wild Turkey Federation
When the National Wild Turkey Federation was founded in 1973, there were about 1.3 million wild turkeys in North America. After decades of work, that number hit a historic high of almost 7 million turkeys. To succeed, the NWTF stood behind science-based conservation and hunters’ rights. Today, the NWTF is focused on the future of hunting and conservation through its Save the Habitat. Save the Hunt. initiative – a charge that mobilizes science, fundraising and devoted volunteers to conserve or enhance more than 4 million acres of essential wildlife habitat, recruit at least 1.5 million hunters and open access to 500,000 acres for hunting. For more information, visit NWTF.org.