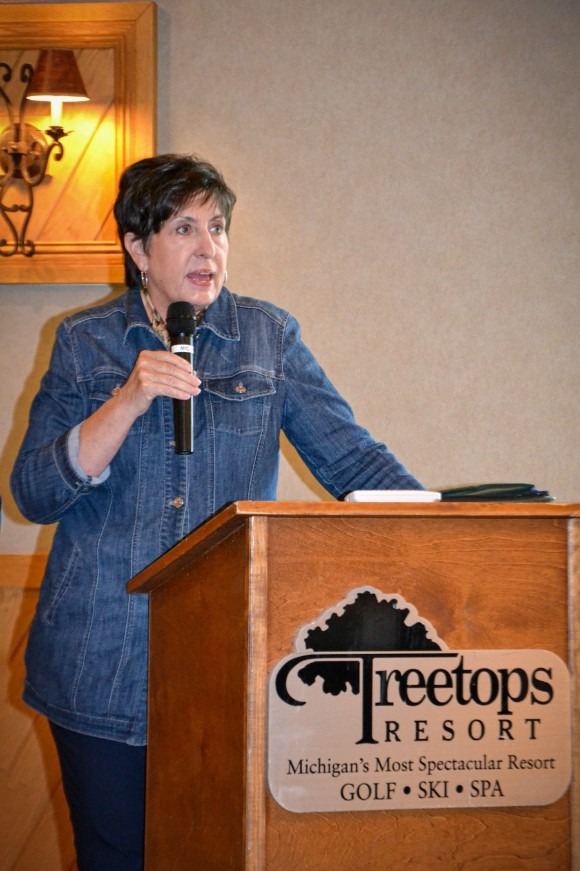 Humphries spoke to the crowd of outdoors media and hunting and fishing industry partners on the importance of diversifying the face of the outdoors.

“For us to be more sustainable, we have to be more diverse,” Humphries said.

Humphries began her speech highlighting some of America’s most iconic conservationists — Teddy Roosevelt, John Muir, Aldo Leopold and Gifford Pinchot, among many other figureheads.

There are icons of conservation, however, that are often overlooked in the greater conservation story, Humphries noted. The CEO brought to light the crucial role women played as Americans began working to conserve and restore its natural resources and forests.

Humphries expounded on the immense contributions women brought to America’s great conservation story, accomplishments ranging from Sarah Platt-Decker, Leila Pinchot, the Federation of the Associated Women, the Migratory Bird Act and more. What started as a few women working to improve their communities blossomed into a federation of thousands across the country, much like the NWTF.

However, women’s roles in the greater conservation story would soon be silenced. As scientific enterprise became the leading tool to implement conservation, the male-dominated field isolated women from the conservation world.

“Even when I was a kid, I was told to consider a different profession,” Humphries said. “Luckily I had people in my life to encourage me to pursue natural resource conservation.”

Humphries tied the disconnection of women, who now are heavily influential in natural resource management and conservation work, to the isolation of people of color and nonhunting backgrounds from the outdoors and conservation narrative.

“The landscape is changing and so are the people,” Humphries said “If we are going to ensure that these resources endowed to all of us as Americans are conserved and managed, the face of the people who conserve and revere them needs to be more representative of what America looks like.”

“We have to be inclusive of people of all races and backgrounds. We have to turn from being an exclusive hunt club to being inclusive conservationists.”

“Becky Humphries’ presentation was timely, pertinent and resonated with our members,” said Mark Smith, AGLOW’s executive director. “We appreciate her sharing her perspectives and inspiring our association with her lifelong dedication to conservation.”

Founded in 1956, AGLOW is one of the nation’s oldest and most respected professional outdoor communicators organizations in the country.  The association boasts over 400 members, comprised of writers, editors, publishers, TV and Radio broadcasters, authors, lecturers, photographers, artists, electronic media specialists, bloggers, podcasters, outdoor industry representatives, tourism professionals and conservation groups. The association stretches far beyond the Great Lakes region with membership from 36 states and 2 Canadian provinces.