A memorable Sunshine State hunt proved to be a happy alternative to the stark reality of the burgeoning 2020 pandemic.

Legendary turkey hunter and author Dwain Bland said there’s nothing better than being dropped off alone in the dark at a place you’ve never been.

That paraphrased quote rang through my head during early March 2020 as UTV lights faded into the mist. I was a solitary blob in a sea of blackness, surrounded by a symphony of birds and tree frogs. Only the blue dot on my phone’s GPS indicated where I was — basically lost somewhere in southern Florida.

And as I soon learned, that couldn’t have been better.

HUNT ON THE RUN

The previous day, I’d joined several friends from Rock Ridge Outdoors, owners of The Grind turkey brand, for my first hunt of Spring 2020. Terry Rohm, NWTF Grand Nationals Calling Contest Hall of Fame member and two-time Senior Division champion, greeted me at a rustic camp at property leased by Rick Milham, and we plotted strategy for our first morning. The plan was simple: Go to a likely spot, listen for birds in the pre-dawn and then make the most of the morning.

As the eastern sky brightened the first day, I began to get a better feel for my surroundings. A two-track road cut along the edge of a vast open flat to my east. Several large oak stands dotted the landscape to the north, south and west. That’s where I expected to hear the morning’s first gobble, and a bird soon proved me right, hammering once on the limb far to my south.

Not knowing the terrain, I crept cautiously toward the gobbler and then found a decent setup. The turkey only sounded off a few more times, but another bird joined in farther south, and two gobbled sparingly far to the north.

“At least I’m in the middle of them,” I thought.

But hope soon faded as everything went quiet after flydown. I briefly considered walking and calling along the road but quickly nixed that thought after viewing the open woods and swamp. The best strategy, I figured, was to stay put, call here and there, and hope to strike a longbeard.

And after about 40 minutes, it worked, as a gobbler responded by my yelping about 150 yards to the southwest. I quickly cut some distance to the bird, found a decent tree near an opening and resumed calling. Soon, however, it became apparent that the gobbler was in no hurry, responding to calling now and then but just slowly drifting north.

“This isn’t going to work,” I thought, reaching for my phone to check a mapping app. Sure enough, the road curved around to the northwest, and if I followed it quickly enough, I might get ahead of the turkey’s travel path.

I eased out of the timber and started hoofing north, calling as I went. The gobbler responded once or twice but seemed farther away. Still, with nothing to lose, I stuck with my plan.

After a few minutes, I reached a flat, open woods and figured I shouldn’t press farther. I paused to listen and glass for a few minutes and then ran a Grind slate call. Bam. The gobbler had almost paralleled me and was about 150 yards to the west. Again, with no better options, I sat and tried to work the bird.

And again, the turkey had other ideas. After a long silence, it finally gobbled on its own — about 100 yards farther south. Apparently, the gobbler had turned around and was retracing its footsteps. Or was it strutting back and forth? Whatever the case, it wasn’t coming, and I knew it. 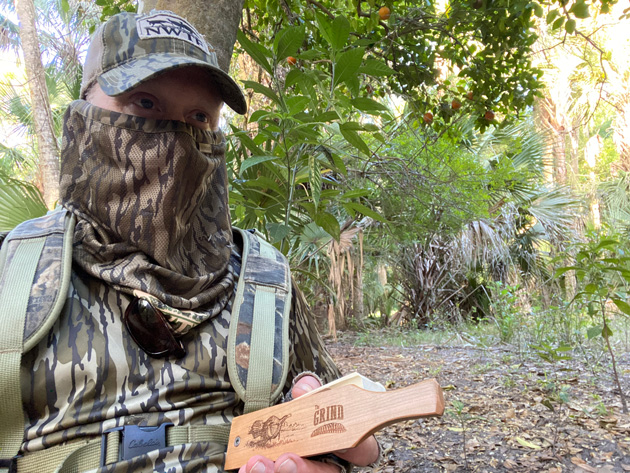 Following the gobbler’s lead, I slipped south along the two-track, hoping to at least keep in contact with the turkey. One gobble let me know he was still nearby, but that was all I could coax from him. Soon, I arrived at my initial setup and tried to check the bird again. Nothing.

Hmm. Continuing to blunder through open country in pursuit of a quiet turkey didn’t seem smart, so I paused to glass and listen. The woods were full of life, but I caught no sign of the bird.

“Dang it,” I thought. “You really need to know where he is before you move again.”

Minutes later, as if in answer to a plea, a dark flash caught my eye. I froze as the gobbler walked briefly through a swampy opening about 120 yards to the west, picking at the ground, wet beard swinging in the dew. The turkey was still heading south, so I let it disappear in the palmettos and then slowly crept to a small opening where the road and woods met. Figuring I couldn’t go farther, I sat to see what would happen.

I scratched out some soft yelps and then jerked my head to the left when the gobbler cut me off about 80 yards to the south. And when the turkey gobbled closer at my next sequence, I knew the game was on.

Adjusting my gun somewhat, I tried to predict where the longbeard would appear — on the road to my left or the thick stuff ahead and to the right. The dense Florida cover might necessitate a last-second move.

I yelped again, and the turkey blew my hat off about 50 steps out, obviously approaching quickly. Soon, drumming drifted through the thick air, and I caught glimpse of the gobbler sneaking toward me and to the right.

A small open spot stood out amidst the understory, and I realized I’d have to shoot the bird the instant he popped into view there. Its white head bobbed left and right through the trees in swift approach, and in seconds, the turkey broke cover and looked toward me to find the hen.

The shot was already on the way, though, and the hunt ended swiftly. The gun’s echo still rang through the swamp as I jumped up to grab the gorgeous Osceola gobbler and heft it skyward. And what a turkey it was, with brilliant colors and razor-sharp 1¼-inch hooks. My only regret was that I’d blown much of its beard off with the bang-bang shot at 15 steps.

No matter. The plan had come together with an unforgettable timber hunt for a hard-gobbling turkey. And with my tag filled, I could relax and take in everything else the Florida spring offered.

The rest of the week, I eased into camp life, hanging out on the deck, enjoying great food and trading stories with camp-mates. During mornings and evenings, I listened and scouted for birds and took photographs. During the heat of the day, we chilled out and just enjoyed the serenity.

But soon, the television began to occupy more attention. The country, it seemed, was buzzing about something called COVID-19, and experts predicted a troubling pandemic. Helpless, we watched the stock markets tumble at the news and worried about what the future might bring. We were, it seemed, a tiny island of normalcy in a nation of surreal craziness.

Eventually, I returned home and, like other Americans, learned the hard realities of what the next few months brought. And often during that rollercoaster ride, I looked back and realized that being in middle-of-nowhere southern Florida was a pretty great place to be.