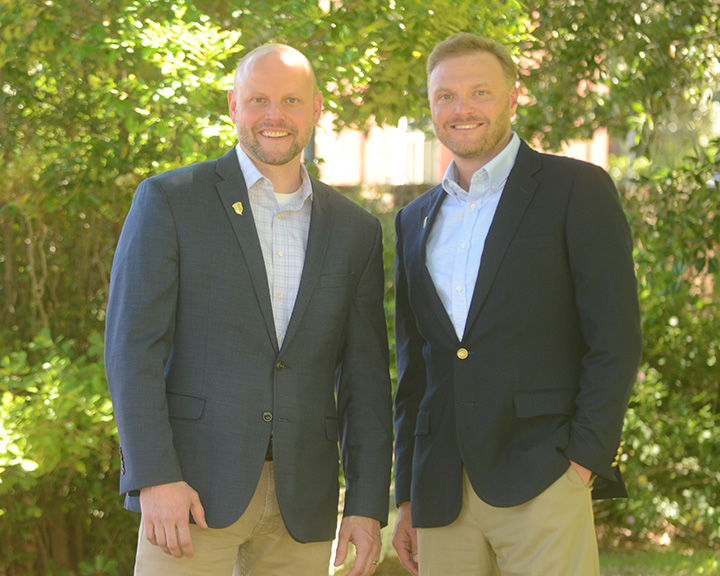 EDGEFIELD, S.C. – The National Wild Turkey Federation today announced that Becky Humphries, its CEO since 2017, will retire in February 2023 as the organization celebrates its 50th anniversary. To succeed her, the NWTF Board of Directors has appointed Jason Burckhalter and Kurt Dyroff, two of the organization’s top staff executives, as co-CEOs, effective immediately. Humphries will serve with them until she steps down.

“Building on Becky’s accomplishments and to prepare the NWTF for the future, the Board decided, after careful consideration, to tap the unique experiences and energy of not just one but two of the organization’s top executives,” said Bryan Perry, president of the NWTF Board of Directors. “Kurt and Jason have established proven track records as effective, forward-thinking senior executives and strong collaborators in managing the organization’s key operations. We believe Jason and Kurt will make an effective team to lead the NWTF.”

Under the NWTF’s co-CEO model, Dyroff will lead the organization’s mission-related activities, including conservation, finance and accounting, and general business support (legal, human resources and land holdings). Burckhalter will oversee membership and fundraising-related duties, including field operations and development, marketing and communications, membership, information technology, and facility management. Humphries will continue as part of the NWTF leadership team, overseeing government affairs until her retirement when those duties will transition to Dyroff.

Burckhalter has been the NWTF’s chief information officer for the past three years and before that served as its vice president of finance and controller. Prior to joining the NWTF in 2013, he held various executive roles with for-profit entities, including as CIO/COO of a national multi-site operation. Burckhalter is a graduate of Lander University where he earned a bachelor’s degree in finance/economics. He received an MBA from Augusta University and an accounting degree from Auburn University.

Dyroff has been the NWTF’s chief business and finance officer for the past three years, and previously held positions as director of business development, acting chief of conservation, and as western director of conservation operations. Before joining the NWTF in 2014, he served in various conservation-focused executive capacities at Ducks Unlimited for nine years. Dyroff is a graduate of The Pennsylvania State University where he earned a bachelor’s degree in civil engineering with a minor in environmental engineering.

In a joint statement, Burckhalter and Dyroff outlined their priorities for the organization:

“We look forward to building upon the NWTF’s nearly 50 years of success. The future is bright and reminds us how the NWTF achieved it: our mission and people. The NWTF will increase focus on our membership and member experience and bolster research and habitat delivery in areas experiencing wild turkey population decline. Our mission, as ever, is to ensure robust wild turkey populations, while benefiting healthy forests, waterways, and communities, and championing the soul of the American hunting lifestyle. This requires a nimble organization, built on a solid financial foundation, capable of retaining and attracting the best and brightest minds.”

Based in Edgefield, South Carolina, the NWTF is dedicated to the conservation of the wild turkey and preservation of our hunting heritage. In the early 1900s, there were as few as 200,000 wild turkeys across the nation due to commercial harvest and loss of habitat. Though restoration efforts predate the beginning of the NWTF, turkey populations still only numbered around 1.3 million in 1973, the year the NWTF began. Thanks to the efforts of the NWTF and its state and federal partners, the turkey populations today is at more than 6.25 million, and the restoration of the wild turkey is widely considered one of the greatest conservation stories in the history of the country.