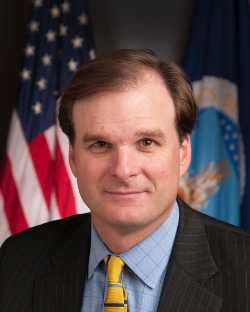 EDGEFIELD, S.C.— The National Wild Turkey Federation celebrates the Senate confirmation of Robert Bonnie as  undersecretary of farm production and conservation for the U.S. Department of Agriculture.

“Robert is supremely qualified for this role in the new administration,” NWTF CEO Becky Humphries said. “He brings with him tremendous experience of implementing conservation priorities on public and private lands, including working lands.”

As undersecretary for natural resources and environment in his previous position, Bonnie, an avid turkey hunter, led the Forest Service and Natural Resources Conservation Service, two of the NWTF’s biggest and longest-standing conservation partners. He is a strong advocate of partner-based programs.

Prior to his confirmation this week, Bonnie served as deputy chief of staff and senior advisor for climate at the USDA and has been an advocate of collaborative conservation efforts, including his support of the NWTF and Forest Service’s Rocky Mountain Restoration Initiative in Colorado.

As USDA undersecretary for Farm Production and Conservation, Bonnie will oversee the USDA’s focal point for farmers and ranchers and other stewards of private agricultural lands and non-industrial private forest lands. Agencies that fall under FPAC include the Farm Services Agency, the Risk Management Agency and the Natural Resources Conservation Service.

The NWTF looks forward to continuing our work with him and his team at FPAC as we help deliver conservation on private lands.