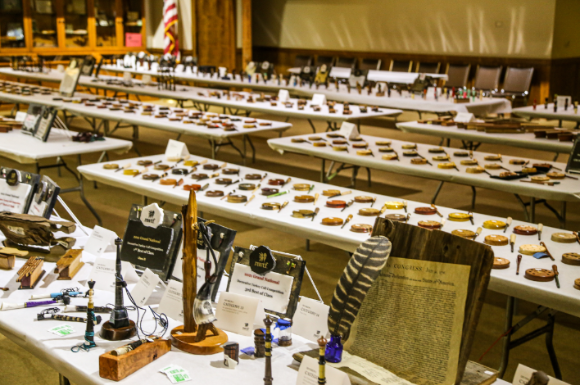 EDGEFIELD, S.C.—Judging for the NWTF 2021 Grand National Callmaking Competition will begin this weekend, putting a spotlight on some of the nation’s top custom call makers.

The Grand National Callmaking Competition is typically held in Nashville, Tennessee, during the NWTF National Convention and Sport Show. With NWTF holding a virtual convention in 2021 to help prevent the spread of COVID-19, the national custom callmaking contest was postponed and is now being held at the NWTF headquarters in Edgefield, South Carolina, July 31 to Aug. 1.

For nearly 50 years, the art of turkey call making has grown alongside the NWTF and is inextricably linked to the NWTF’s history as a conservation organization. Since the founding of the NWTF, custom call makers and callmaking companies have used their craftsmanship and resourcefulness to raise crucial funds for wild turkey restoration efforts. That dedication and creativity in support of conservation is most evident through the Grand National Callmaking Competition.

Over nearly three decades, the national custom callmaking event has grown to include an array of calls represented in four divisions, including decorative turkey, hunting turkey, decorative waterfowl and hunting waterfowl. Within each of these four divisions resides many categories by which the call makers can demonstrate their talents.

Some of the best call makers in the country have sent in their custom-made calls to be judged by a panel of turkey and duck call experts. Over 700 calls within the four categories will be judged on various criteria, such as artistic beauty, craftsmanship, ingenuity, sound and more.

“Our custom call makers are some of the NWTF’s most creative conservationists,” NWTF CEO Becky Humphries said. “The mastery of their craft says a lot about their talent and artisanship, but their philanthropic dedication to the NWTF mission speaks volumes.”

Many of the custom call makers entering the contest donate half or all of the call’s auction price to the NWTF’s conservation mission, bringing in significant funding. With nearly $20,000 in prizes, call makers are able to win prize money, while also supporting the NWTF mission.

Stay tuned as the NWTF will announce winners of the Grand National Callmaking Competition and provide a link to the auction where these artisanal, one-of-a-kind calls can be purchased and generate funding for conservation efforts. Visit customcalls.nwtf.org for more information