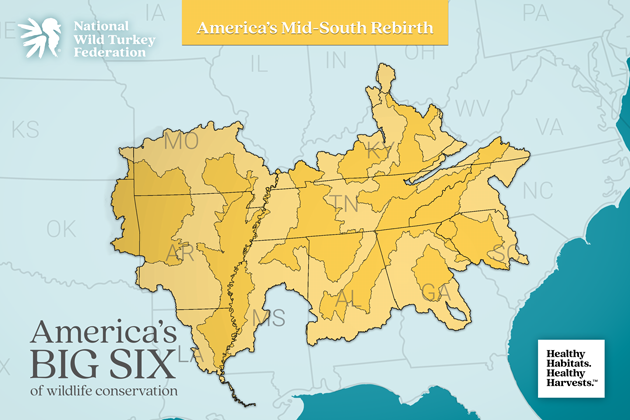 The NWTF’s Conservation Week will highlight this all-encompassing work through the NWTF’s America’s Big Six of Wildlife Conservation, which encompasses the entire continental U.S.

Today, for our Week of Conservation we are highlighting some of the great work the NWTF is doing in its America’s Mid-South Rebirth. 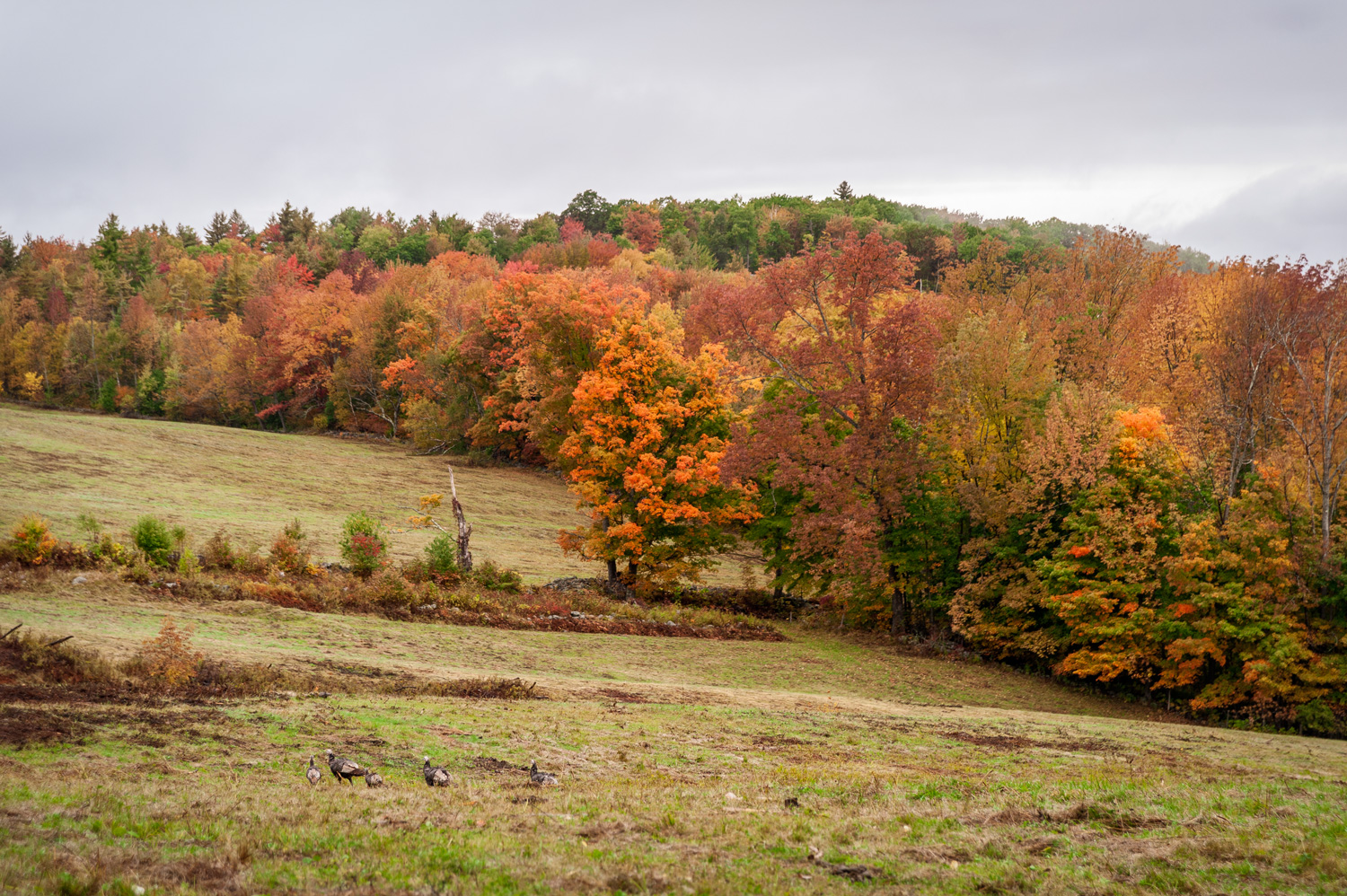 NWTF’s Mid-South Rebirth is characterized by upland hardwood forests dominated by oaks, which provide critical food and habitat for wildlife. However, these oak forests that are home to countless turkeys and other wildlife are rapidly declining.

Development, growing agricultural operations and urban sprawl are quickly altering the southern landscape. The NWTF is working with federal and state agencies, nongovernmental organizations, and traditional and nontraditional partners to implement active stewardship and management on our remaining habitat, slowing the pace of development and increasing viable habitat.

The NWTF is collaborating with an array of partners on a variety of projects that will ensure the wild places in NWTF’s Mid-South Rebirth stay wild and continue to provide great habitat. Some recent projects include:

Regional projects include the work NWTF state chapters fund through the NWTF Super Fund. Super Fund dollars are raised by NWTF local chapters in a state and go toward benefiting projects in their respective state. Projects like this include creating wildlife openings on WMAs or creating early successional habitat in national forests. When this regional work is combined with an adjacent state or state in the same Big Six Region, it augments the work the NWTF is doing from a national level through its landscape-level initiatives.

The NWTF has created a handful of landscape-level initiatives across the country that address specific issues of concern and incorporate an array of traditional and nontraditional partners, agencies and interested parties. These groups combine resources, funding and expertise that ultimately benefits the wildlife, forests, private lands and wetlands on an entire landscape.

Wild turkey ecology research is the guiding star for much of the conservation work the NWTF implements, and it is also crucial in addressing population declines, especially in the Mid-South Rebirth region. In NWTF’s Mid-South Rebirth, the NWTF is currently helping with the following research projects:

Interstate banding efforts between Tennessee and Kentucky to gain more information on hunter harvest data that will ultimately contribute to more successful management of wild turkeys on the entire landscape. Look for more information on this study in the future

Policy is another major part of the NWTF’s mission that is housed under the conservation of the wild turkey and the preservation of our hunting heritage. In the Mid-South Rebirth region, the NWTF has been involved in the following legislation: 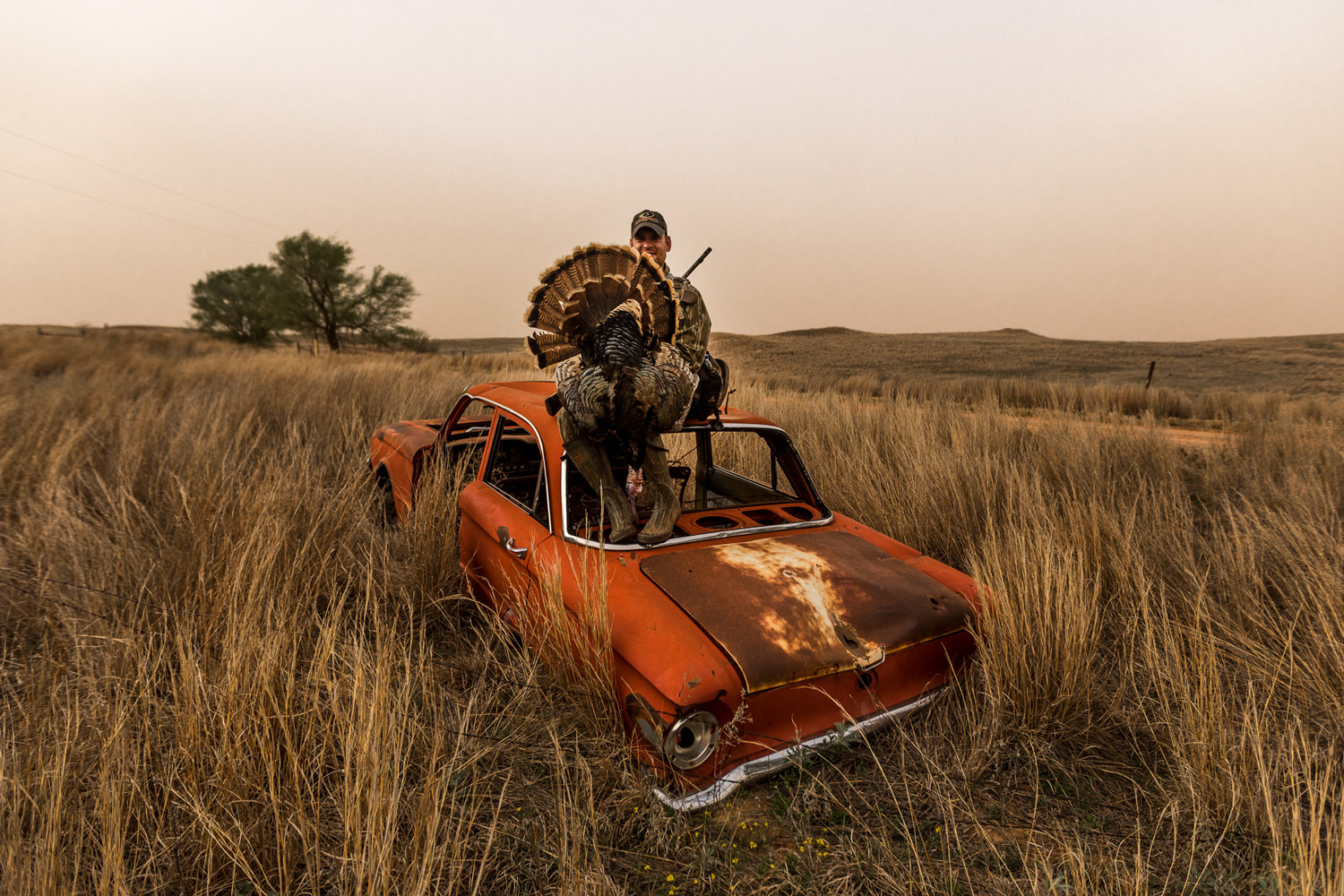 Bev Leigh - Chairmen of the Tuscaloosa, Alabama Chapter and State Chapter board member. Leigh has been involved with the NWTF since the 1980s, and his chapter consistently is one of the highest net fundraising chapters in the country. On top of that, he actively engages members of the community to promote hunting, shooting sports and habitat work. Leigh is currently in the process of securing a location for the University of Alabama’s shooting team, so they no longer have to drive over an hour to their current practice location. This is in addition to his work to secure scholarship funding for these student athletes. Leigh is always just a phone call away to lend his support. He’s a big reason NWTF’s outreach efforts have been so successful since they started a few seasons ago. He’s a leader and a pillar in the community and a true conservation hero.

The Local Mountain Grove Chapter is a 100-plus sponsor event that annually runs a subsidy program providing low-cost generic roundup to members that impacts about 1,000 acres per year.

Bud Foshee - Foshee, an Alabama State Chapter board member, is a dedicated conservationist and recently put on a landowner workshop with over 80 participants, informing them on how to best manage their properties for wild turkeys and other wildlife.

Plateau Longbeards - This chapter excels in everything. They host several mentored hunts each year for JAKES and Wheelin’ Sportsmen. They do a great job in finding sponsorships for each station at their JAKES events and always make sure every youth leaves with a JAKES membership. They have also helped get other events started within the state using their JAKES event as a model.

These volunteers do everything – from raising funds to mentoring new hunters - while selflessly dedicating their time and energy to further the NWTF’s mission.

During our Week of Conservation, we want to highlight how far our mission reaches, but we also want to show how it all interrelates. Stay tuned for more on America’s Big Six of Wildlife Conservation and the NWTF’s impact on our great outdoors.