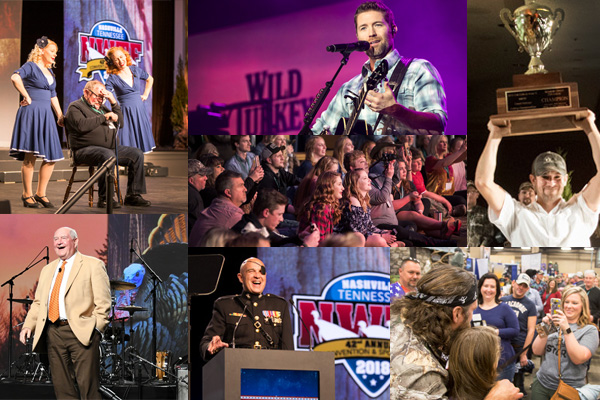 "I cannot thank our volunteers, members, partners, donors and staff enough for making the 2018 NWTF Convention and Sport Show a resounding success," said Becky Humphries, NWTF CEO. "It takes an entire flock to pull together to make this event happen, and I am extremely proud to be a part of this team."

Record marks were posted in attendance, fundraising, sales and more — attendance hit nearly 56,000; fundraising was up nearly 13 percent; Turkey Shoppe sales were up more than 17 percent; and the Custom Callmaking Contest had 968 entries.

For the first time in convention history, the entire Grand National Calling Championships were streamed live. Already the contests have garnered more than 1 million views, helping to bring the world of turkey hunting to new audiences.

A concurrent Conservation Conference, hosted by the NWTF, agency and industry partners, brought together more than 150 wildlife biologists, habitat experts and volunteers from across the country to focus on ways the hunting and conservation industry can come together to Save the Habitat. Save the Hunt. A variety of seminars focused on sharing information, research data, conservation techniques and hunter recruitment strategies. While participants completed much work furthering conservation, they also were acknowledged for their outstanding efforts through numerous awards and special recognitions.

For more coverage on all of the events held during the convention and sport show, including all awards and competitions, visit www.NWTF.org.

Save the dates of Feb. 13-17, 2019, for the 43rd annual NWTF Convention and Sport Show at Gaylord Opryland Resort and Convention Center.

About the National Wild Turkey Federation
When the National Wild Turkey Federation was founded in 1973, there were about 1.3 million wild turkeys in North America. After decades of work, that number hit an historic high of almost 7 million turkeys. To succeed, the NWTF stood behind science-based conservation and hunters' rights. The NWTF Save the Habitat. Save the Hunt. initiative is a charge that mobilizes science, fundraising and devoted volunteers to raise $1.2 billion to conserve and enhance more than 4 million acres of essential wildlife habitat, recruit at least 1.5 million hunters and open access to 500,000 acres for hunting. For more information, visit www.NWTF.org.