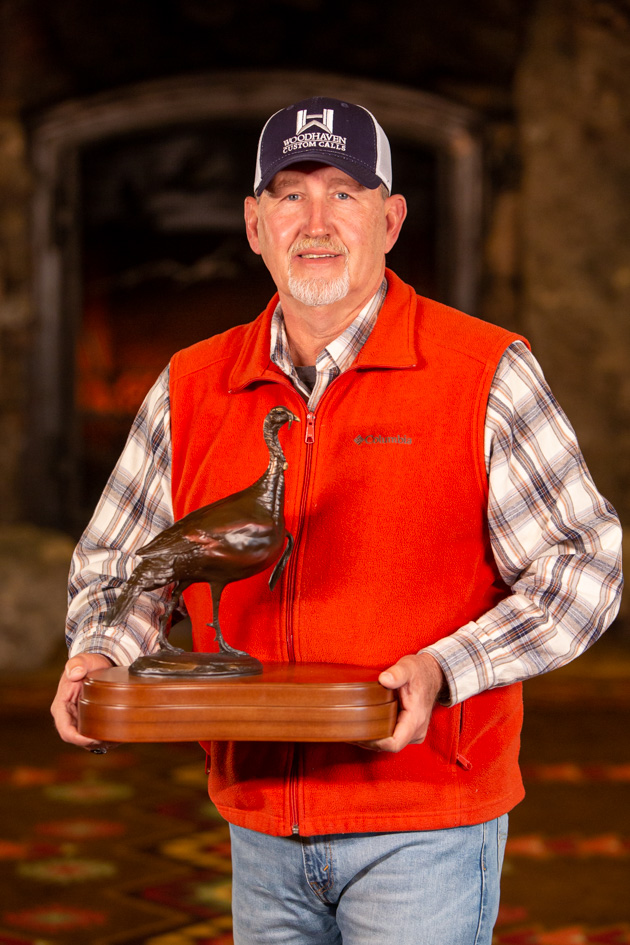 EDGEFIELD, S.C. – The National Wild Turkey Federation honored Mike Pentecost of Woodhaven Calls with the Dick Kirby Award for his ingenuity in helping the NWTF mission.

“It gave me chill bumps when I was nominated,” Pentecost said. “I got to thinking about it, and it is an honor to be in the same group as all the past Dick Kirby Award recipients. I am honored to help the NWTF however I can. As callmakers and turkey hunters, we aren’t playing for the names on the back of our jersey, we are all playing for the same team.”

Pentecost of Heflin, Alabama, accepted the award at the 45th annual NWTF Convention and Sport Show, held virtually in 2021.

The award is named for turkey hunting legend Dick Kirby, who was the brains and heart behind Quaker Boy Calls. He also was one of the original members of the NWTF, serving nine years on the NWTF National Board of Directors in the 1990s.

Like many call makers, Pentecost, owner and founder of Woodhaven Calls, began crafting calls as a hobby in his quest to make the best turkey call on the market. A hobby that started in his grandparents’ basement became a business that has stood the test of time and, 20 years later, continues to thrive.

In addition to working closely with the NWTF to assist with fundraising, Pentecost supported the NWTF’s Call for All Campaign by donating 200 special-edition Woodhaven calls to help the NWTF raise more than $5 million. Pentecost received the Dick Kirby Award for his impact on the callmaking industry and his support in raising funds for the NWTF mission.

“During the most financially difficult period the NWTF has ever faced, Mike used his craftsmanship and resources to help generate significant funding for the NWTF and its future,” NWTF CEO Becky Humphries. “We are excited to honor Mike for his resourcefulness with Woodhaven Calls and his dedication to the NWTF mission.”