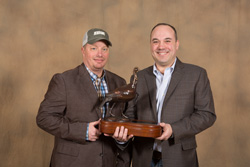 Plano Synergy, based in Grand Prairie, Texas, received the award during the 42nd annual NWTF Convention and Sport Show.

Presented annually by the NWTF, the Corporate Achievement Award recognizes the outstanding work and dedication corporate partners have displayed in conserving wildlife and habitat and preserving our hunting heritage. The NWTF determined this year’s award winners based on how their work strengthens the organization’s Save the Habitat. Save the Hunt. initiative.

“Plano Synergy has stepped up its support efforts because it truly understands how urgent it is that we recruit, retain and reactivate hunters,” said Becky Humphries, NWTF CEO. “It’s not just an NWTF mission, it is our future. With partners such as Plano Synergy, we will Save the Habitat. Save the Hunt. for generations to come.”

About the National Wild Turkey Federation
When the National Wild Turkey Federation was founded in 1973, there were about 1.3 million wild turkeys in North America. After decades of work, that number hit an historic high of almost 7 million turkeys. To succeed, the NWTF stood behind science-based conservation and hunters’ rights. The NWTF Save the Habitat. Save the Hunt. initiative is a charge that mobilizes science, fundraising and devoted volunteers to raise $1.2 billion to conserve and enhance more than 4 million acres of essential wildlife habitat, recruit at least 1.5 million hunters and open access to 500,000 acres for hunting. For more information, visit NWTF.org.