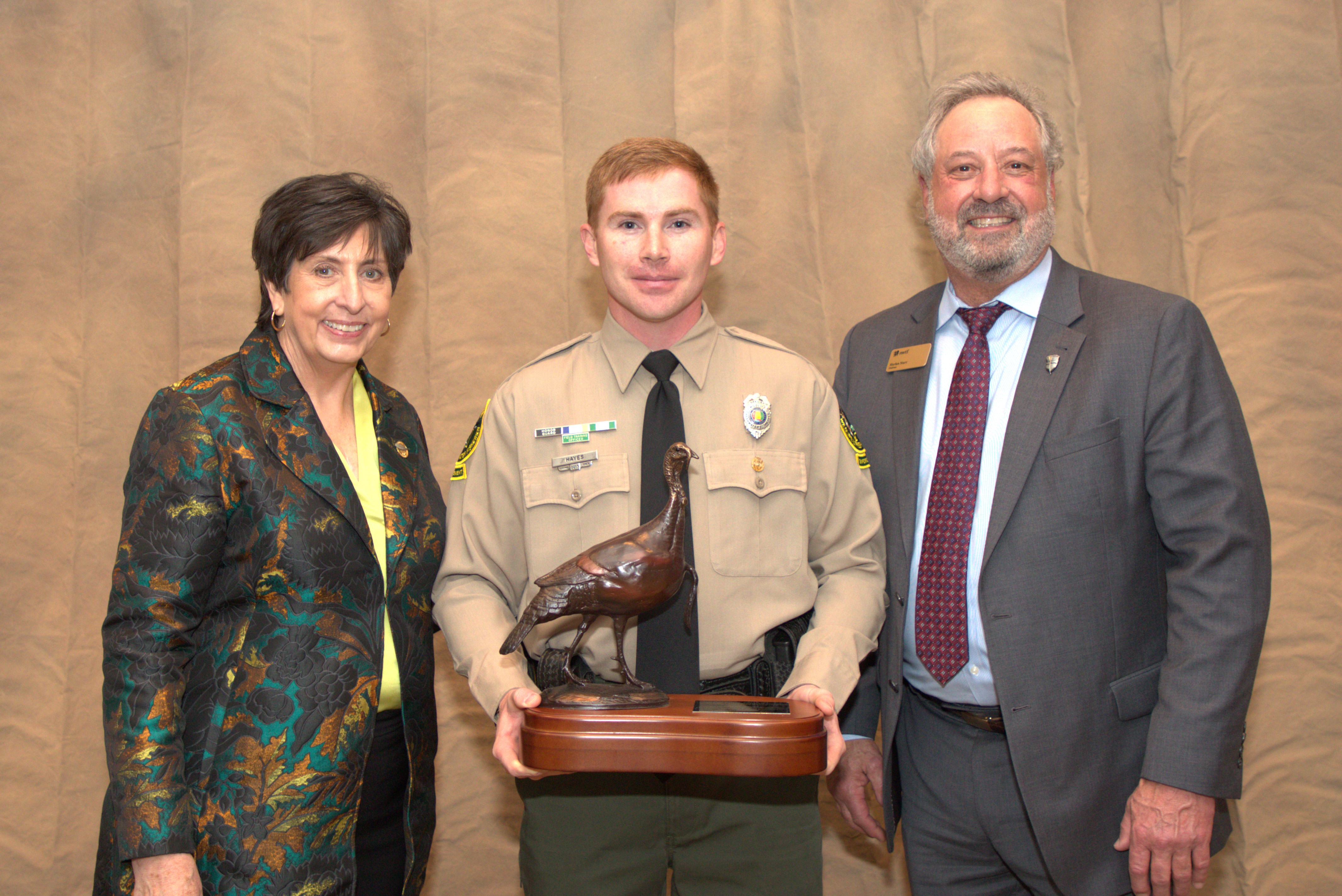 NASHVILLE, Tenn. – The National Wild Turkey Federation presented Senior Conservation Officer Drake Hayes of the Alabama Department of Conservation and Natural Resources with the Wildlife Officer of the Year Award for his dedicated commitment to Alabama’s natural resources.

“Thank you very much,” said Hayes. “I just like to thank god first and foremost. And thank again for all the blessings in my life and thanks to the NWTF for this wonderful opportunity and for my family for putting up with my career choice. All the early mornings [and] late nights and everything in between. I would also like to ask for a round of applause for all the other officers and their families that is here as well tonight. Each and every one of them is just as deserving if not more than me.”

Hayes received the Wildlife Officer of the Year Award at the 46th annual NWTF Convention and Sport Show, sponsored by Mossy Oak.

The Wildlife Officer of the Year Award is given to individuals who have excelled and demonstrated exceptional performance in the following areas: teamwork and innovation, attitude and leadership, and achievements and accomplishments.

Hayes has been with the Alabama Department of Conservation and Natural resources since 2013 and has become well known across the state as a staunch conservationist and fair-minded law enforcement officer. His love of the outdoors, coupled with a strong sense of duty, drive him to excel in his law enforcement efforts.

On the opening day of the 2021 spring turkey season, Hayes and a department trainee crossed a swollen creek using a submerged log to apprehend poachers who were illegally hunting wild turkeys over bait, leading to six arrests. Hayes and the trainee worked the entire day wet from the knees down.

Moreover, over the course of the 2020-21 season, Hayes conducted 145 arrests, assisted with 29 other arrests and personally issued 162 warnings.

Additionally, Hayes is a field training officer and has introduced many new conservation enforcement officers into the department. He is regarded as an asset to the department and is described as someone who is always willing to assist others where he can.

“Officer Hayes is an exemplary wildlife officer and conservationist,” NWTF CEO Becky Humphries said. “He has illustrated a determination and compassion to conserve and enforce the laws of Alabama’s natural resources. We are proud to recognize his efforts and all that he does for the Alabama Department of Conservation and Natural resources.”

When the National Wild Turkey Federation was founded in 1973, there were about 1.3 million wild turkeys in North America. After decades of work, that number hit a historic high of almost 7 million turkeys. To succeed, the NWTF stood behind science-based conservation and hunters' rights. Today, the NWTF is focused on the future of hunting and conservation through its Save the Habitat. Save the Hunt. initiative. Since 2012, this 10-year initiative has already eclipsed goals of conserving or enhancing more than 4 million acres of essential wildlife habitat, recruiting or retaining more than 1.5 million hunters and opening access to more than 500,000 acres for hunting and other recreation opportunities. This critical work will continue to impact wildlife habitat and our great outdoors in the final year of the initiative.