A storm of habitat challenges

Hurricanes that batter landscapes cause short- and long-term problems for wild turkey populations.

Ask any turkey hunter what a wild turkey needs and then prepare yourself for a sermon on the importance of habitat. Creating and conserving habitats for wild turkeys and furthering our understanding of the intricate relationship between forests and those turkeys has consumed most of my professional career.

In creating habitat for wild turkeys, we typically manipulate vegetation already there, usually via prescribed fire, timber harvest, or other combinations of land management activities. The year 2020, though, was devastating in terms of the number of hurricanes that hit the southeastern United States. What happens to turkeys when, in one day, hundreds of thousands of acres of habitat suddenly change from usable, to potentially unusable, space?

HOW EXTREME IS EXTREME?

Hurricanes vary in intensity, and we typically associate hurricane damage with tidal surge inundating homes in coastal areas. But, for wild turkeys, the real danger is wind.

Wild turkeys use roost trees at night to avoid predation and provide safety for them to rest and recharge. We have all seen turkeys on limbs rocking gently in a morning breeze before fly down. However, when the breeze turns into a gale, wild turkeys often respond by ground roosting, or spending the night tucked up out of the wind until the storm passes.

Our GPS data tells us that turkeys seem to sense coming storms, likely due to changes in barometric pressure. They significantly reduce their movements before the storm hits. As soon as the storm passes, though, our research shows turkey movement returns to pre-hurricane levels, suggesting that turkeys may not have any significant changes to their behavior during the period right around when the storm occurs. Our data also indicate that wild turkeys do die during hurricanes. Although speculative, we think these deaths are most likely caused by trees falling on turkeys while they are ground roosting. Some recent work out of South Carolina and Texas suggests that hurricane-related mortality was between 5-8%, fairly high for a single hurricane event. 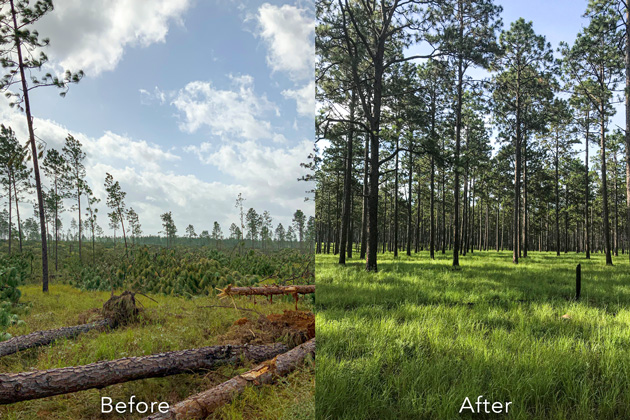 So, while most turkeys go about their business after a hurricane hits, not all storms are the same. Using an example specific to my home state of Louisiana, Hurricane Laura hit the coast south of Lake Charles on Aug. 26, 2020, and ran up Louisiana’s western boundary all the way to Shreveport. Right in the middle of Laura’s path was the Kisatchie National Forest, well known as a stronghold of the wild turkey in Louisiana and one of my long-term wild turkey research areas since 2014.

Physics research tells us that the critical wind speed at which most species of trees will break, snap or uproot is about 90 mph. In west-central Louisiana, Hurricane Laura’s winds exceeded 100 mph as it passed through my study area. The impacted region saw damage to more than 750,000 acres of timber and, in this case, damage to the forested landscape may create short- and long-term impacts to wild turkeys.

Short term, the many blown-down trees create an inhospitable landscape for wild turkeys. Some GPS data is suggesting that individual turkeys in damaged areas are relocating to new, unfamiliar areas.

Both upland pine and bottomland drainages that wild turkeys use as travel corridors, nesting, brooding and foraging habitats are also a crisscrossed mess of damaged timber. This reduces wild turkey use for the near term.

Next, the opening of the canopy from all the downed trees, when combined with the heat and rain of a Louisiana summer, should significantly increase vegetative understory over the next few years. This will create a nearly impassible wall of vegetation that may render unsuitable areas previously used as nesting or brooding habitats for wild turkeys.

Management actions such as prescribed fire will likely be used to mitigate some impacts of understory growth.

Although Laura hit well after the breeding season, previous research in South Carolina found turkey reproduction was reduced after Hurricane Hugo for several years. Researchers attributed reduced production to the loss of usable space for nesting hens. Adding insult to injury, during post-storm evaluation of damage to the area we found that hardwoods in drainages and bottoms were utterly devastated. Mast produced by hardwoods throughout the region represents a staple in the wild turkey diet. Hardwood regeneration there will be measured not in years, but in generations. The loss cannot be overstated.

However, we know wild turkeys are resilient. In the end, focused management activities by our private, state and federal partners will help us round the bend and sustain wild turkeys in the face of inclement weather across the United States.