All Hands, Lands and Brands on Deck

“The turkey symbolizes what a diversified, healthy forest looks like: a healthy riparian system along streams, a wet meadow where a turkey can go out and find bugs, cover to nest and raise broods, and some big, mature trees to roost in at night,” said Dorsey, who is NWTF director of conservation operations for the West region.

Western wildfires are one of the biggest threats to wildlife habitat, not to mention habitats of humans.

To tackle the growing threat of high intensity wildfires, NWTF has co-convened with the USDA Forest Service — over the past 14 months — a huge, first-of-its kind approach to restoring dangerous, overgrown forests. They hope 10 years from now, three-quarter-million acres in southwestern Colorado will look much more like they did originally — like prime turkey habitat.

More than 40 organizations have signed on to the Rocky Mountain Restoration Initiative, or RMRI. In forest conservation, that’s massive. Each has a stake in the forest, with some already working on smaller projects to try to mitigate fires.

“There’s a lot of work going on, but the pace and scale of the work isn’t enough to keep up with the threats and risks that are out there,” Dorsey said.

“So,” she posed, “the question is, how do you scale it to a meaningful level? If you put a lot of effort into one spot, could you then be done with that spot, so that community will be prepared and be protected from a major catastrophic wildfire?” 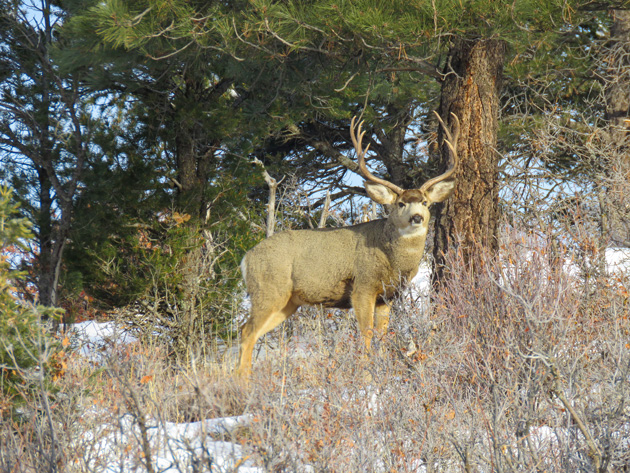 The enormous venture sprang from a conversation at the 2019 NWTF annual convention. There, NWTF CEO Becky Humphries and Forest Service Chief Vicki Christiansen, building on a 40-year partnership between the two organizations, challenged each other to solve the region’s wildfire and habitat concerns.

Luckily, NWTF’s Tom Spezze, then senior director of conservation for the West, had recently helped conceive just such a plan aided by NWTF biologists from across the West. At Humphries’ request, Spezze went back to his hotel that night and distilled the 22-page plan into the bullet points he thought were most important.

Deciding where in the West to try the new approach, they soon settled on Colorado thanks to local support for forestry work and private investments already being made. Plus, the state is at high risk for wildfires that wreak substantial damage. The fringes of the wild lands are developed with houses, including entire subdivisions of homes tucked into the trees.

The fact that Colorado is an important headwater state also factored into the choice of location. Melting snowpack high in the mountains feeds four major rivers. The Arkansas, Colorado, Rio Grande and South Platte rivers supply 18 western states and parts of Mexico.

At the same time, a deeply rooted culture of collaborating on conservation work in Colorado, especially on Forest Service stewardship agreements, suggested a better chance of success, according to Spezze.

Leaders from NWTF and the Forest Service ultimately chose southwestern Colorado because it already had working public-private collaboratives in place, as well as a timber industry able to process trees that otherwise wouldn’t have much commercial value.

The RMRI’s extensive partnerships distinguish it from other forest restoration work around the country, Dorsey said.

“A lot of times, when we focus on forest health and watershed health, the usual players, conservation groups and government agencies, are at the table,” she explained, adding that the addition of “nontraditional partners” brought the RMRI to life.

“Colorado’s water utilities, for example, have a stake in restoration because they have reservoirs, pipelines and canals that clog with ash and debris after a fire. Water treatment plants may have to shut down. For $1 million contributed to RMRI, if they could protect billions in infrastructure, that’s a pretty good investment for them.”

Spezze remembers how Colorado used to be.

He attributes that partly to the changing climate. Less snowfall and warmer spring temperatures contribute to rapid runoff of the snowmelt, leaving the land drier, earlier in the season. Meanwhile, insects such as spruce and pine beetles have left behind swaths of dead trees that make fires less predictable.

Spreading through a closely packed canopy while igniting dead trees and dense underbrush, southwest Colorado’s 416 Fire in 2018 “burned so hot that it burned through live aspen groves,” Dorsey said.

Fires can also result in mudslides and debris flows, moving masses of mud and rock. This makes the backcountry unsafe for the state’s hunters and hikers, especially in the rain.

HOW THEY’LL DO IT

One preferred method may seem counterintuitive: setting fires on purpose.

“Ecologically, fire is part of the landscape; we’re going to have fires,” Dorsey said. “It’s about having a landscape that’s prepared to receive fire, so that when you do have fire in the landscape, it does what it’s supposed to do — stays on the ground.”

The southwest Colorado area amounts to about 750,000 acres altogether, with 300,000 of it targeted for hands-on restoration. The work will include thinning and clearing areas using prescribed fire and a process called mastication — basically mowing down small trees — and harvesting timber commercially where possible.

Building resilient communities is also part of the plan, Dorsey said. People need to chip in by taking care of their own land, things like removing small, densely packed trees and woodpiles under decks.

As NWTF’s first Western water conservation coordinator, Travis Smith took on the task of engaging Colorado’s water interests, both municipal and agricultural. After a full career in Colorado water administration and water policy, that’s where he saw his role: forming relationships and helping each entity figure out its part.

“It’s the willingness — the social license” Smith says he looks for. “I call it the ‘want to.’”

“There’s still a lot to figure out, a lot to deal with on a small scale and a large scale, too,” Dorsey noted.

Having planned to meet in Durango for three days in April, the full group of partners met for a few hours via teleconference because of the coronavirus distancing policies. The pandemic is threatening some of the timing of the work. The Forest Service had planned to start controlled burns by now, but as of spring, all prescribed fire had stopped because of the virus.

The Forest Service alone has committed $50 million over 10 years and is still “very much greatly committed to RMRI,” said Tammy Whittington, the Forest Service’s deputy regional forester for operations, Region 2, on the teleconference.

The Rocky Mountain Restoration Initiative is the first of its kind, an “all hands, all lands, all brands approach” to USDA’s Shared Stewardship Initiative, as Spezze describes it.

If the partners make it happen — if they can restore the forest on such scale that it protects the community and watershed from fires — then what?

Naturally, they want to go even bigger.

“We want to spread it out to the rest of Colorado and the rest of the West,” Spezze declared.