In 2019, the Arkansas State Chapter of the National Wild Turkey Federation approved the use of license plate funds to aid in the acquisition of two land parcels. Thanks to the some of the state greatest partnerships in the country, public land access and vital wildlife habitat is being conserved. 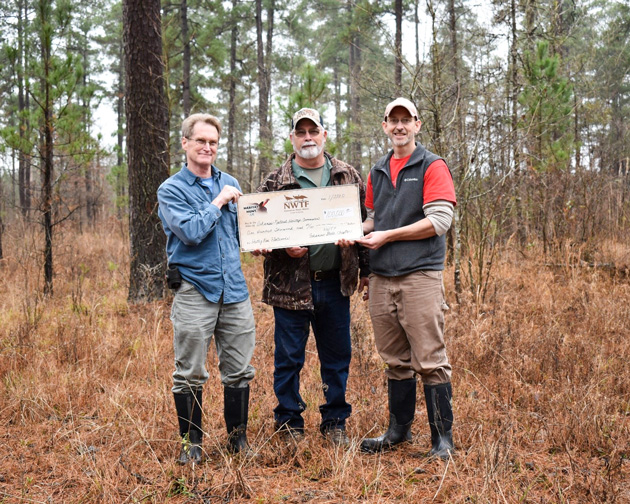 A 1,376-acre acquisition located in southeast Arkansas was purchased in partnership with the Arkansas Natural Heritage Commission, The Nature Conservancy and the Arkansas Game and Fish Commission. Named Huttig Pine Flatwoods Natural Area, the acquired land is made up of four separate parcels located in Union County, Arkansas, boardering the Felsenthal National Wildlife Refuge. Huttig Pine Flatwoods is now part of the Beryl Anthony Lower Ouachita Wildlife Management Area and open to the public for recreational purposes, including hunting. Arkansas NWTF license plate funds totaling $100,000 were approved to aide in the purchase of these parcels. This acquisition provides direct protection to the largest population of endangered Red-cockaded woodpeckers in the Upper West Gulf Coastal Plain of Arkansas and is the second largest RCW population in the state. The Arkansas Game and Fish Commission will be the lead agency on habitat and recreational management and provide enforcement and oversight, and the Arkansas Natural Heritage Commission will be the lead on RCW population and habitat monitoring. 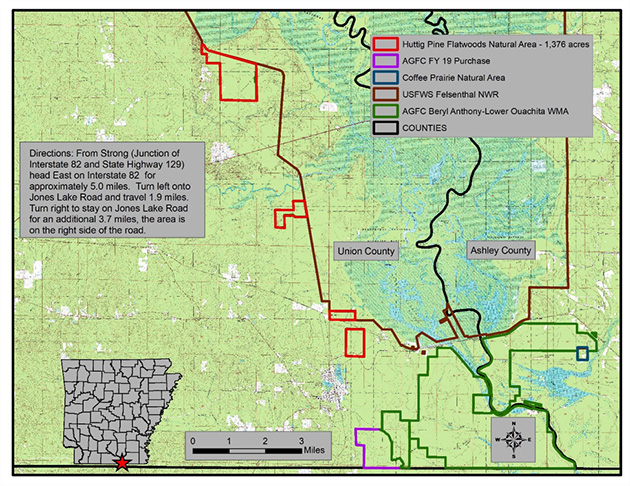 The second land acquisition, although small, was an important five-acre inholding on W.E. Brewster Scatter Creek WMA. The Greene County Wildlife Club approached the AGFC regarding this tract of land and paid for the appraisal of the property. The $14,000 needed to purchase this property came from Arkansas NWTF license plate funds. Acquiring this property put an end to accidental tresspassing issues from outdoorsmen and women using the adjacent public land. This property is now part of W.E. Brewster Scatter Creek WMA and open to public access for hunting and other recreational activities. 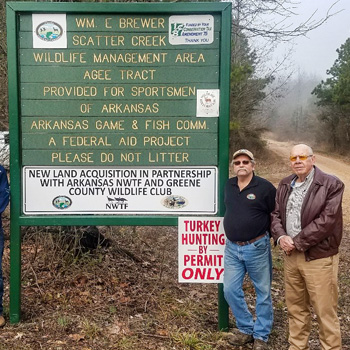 The Arkansas NWTF specialty license plate was developed for education, research and land acquisition to support NWTF Save the Habitat. Save the Hunt. initiative in Arkansas. Being a specialty license plate, $25 comes directly to Arkansas NWTF to support mission specific work in Arkansas. A big thanks to all Arkansas NWTF volunteers, members and supporters of conservation who have purchased an NWTF license plate, these funds have opened access to 2,356 acres that are now in the public lands system. Finally, thank you to the Arkansas Game and Fish Commission, Arkansas Natural Heritage Commission, Greene County Wildlife Club and The Nature Conservancy for the continued partnerships.