The organic waste from conservation projects may be trash to most, but the NWTF and partners are finding ways to turn biomass into treasure for wild turkeys and other wildlife.

Most of us produce biomass and don’t even know it. Cut grass? Trim hedges or limbs at home or at the hunting lease? You’re creating biomass in some form, and that debris usually ends up at the dump or gets burned.

On a small scale of individual use, the impact is limited, although even that landowner usage multiplied millions of times over can create issues. Worse, what happens to biomass when thousands of acres of land are thinned to improve wildlife habitat or logging operations leave tons of debris? The biomass remains, but nobody wants it. 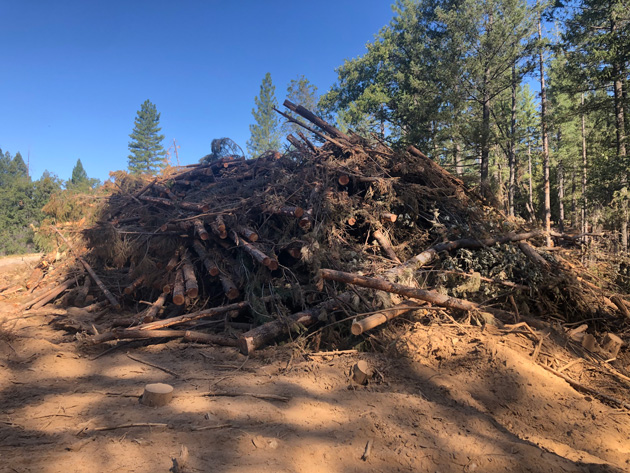 The NWTF, USDA Forest Service and others are working to change that, effectively taking what once was trash and turning it into treasure for wildlife and conservation. The effort will provide better living conditions for wild turkeys and a slew of other wildlife, but also directly impacts our forest health and water quality, while limiting the fuel on the ground that stokes catastrophic wildfire. The latter can save millions of dollars in fighting forest fires, and, more importantly, could save lives.

Reusing biomass is not new, but it’s a process few are familiar with, and its use in wildlife conservation remains in an infancy stage. Biomass is simply the organic material left from logging, thinning, creating openings, removing invasive trees and similar conservation measures. After one of these operations, the aftermath can look like remnants of a tropical storm (more on that later). The leftovers are unwanted, but this biomass has been found to produce other goods like fertilizer, cosmetics, detergents, fuel and energy. Those wood pellets that fuel the high-dollar pellet grills popular today? Most come from woody biomass.

As it pertains to wildlife conservation, the NWTF and its partners are finding ways to turn biomass from conservation projects into funding for more on-the-ground work. It’s what the NWTF is great at: Turning every dollar into a new avenue for improving habitat for wild turkeys and other wildlife. 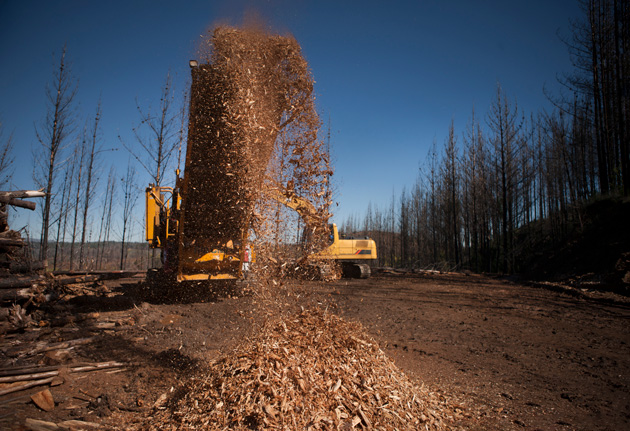 “Biomass, in our case, is made up of small diameter pine and hardwood trees, dead and decaying trees, trees with no timber or pulp value, such as certain invasive species and limbs,” said Mark Hatfield, NWTF’s national director of conservation services. “Most of this biomass will go toward making fuels, such as ethanol or pellets, that are used in alternative energy plants.”

Due to fire suppression in different areas of the country — limiting low-intensity controlled burns that regenerate wildlife habitat — large swaths of forest stands are dense with small diameter shrubs and trees that do not benefit wildlife. These species of woody vegetation are what gets cut and left as biomass on the forest floor. 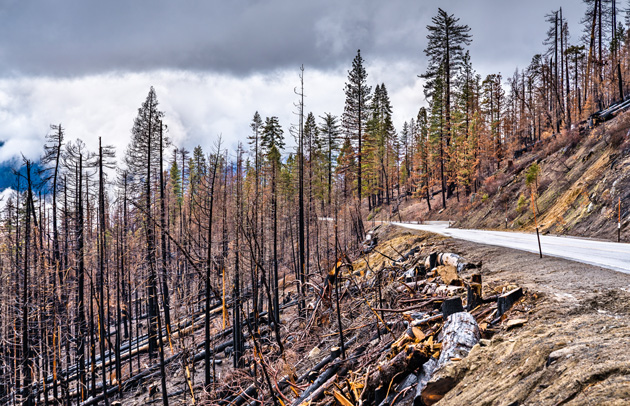 “To get our forest back into that natural state where it can take on healthy, natural fire without creating catastrophic wildfire, we need to remove a lot of that small-diameter material,” said Kevin Vella, NWTF district biologist for the Pacific Coast region. “Some of those smaller trees have enough value as commercial saw logs that can offset the expensive price to remove them by subsidizing their value to the local mill. But most times, there is little to no value of that material as lumber.”

Vella and other conservation partners, such as the Mule Deer Foundation and Great Basin Institute, have worked to find value in collecting biomass from conservation projects, often viewed as cost prohibitive because of its limited market. It can be burned in cogeneration power plants (recycled energy from heat and power) to create electricity or ground up and used as landscaping mulch or shaving for agricultural animal bedding, Vella said. But even with government incentives for green energy, the cost to remove the material outweighs the return in those markets.

“If biomass had the potential to create value, it would cost us less per acre to get work done, and, in turn, we could get more acres treated,” Vella said. 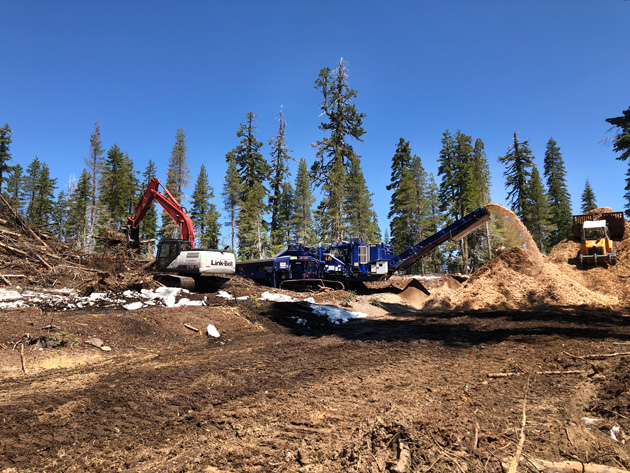 California’s state forestry department and fire protection agency sees the value of biomass through the lens of carbon emission reductions because healthy trees and forests sequester carbon — a process that trees use to soak up the carbon dioxide in the atmosphere and store it as carbon — and catastrophic wildfires release that carbon into the atmosphere. Offsetting carbon emissions is the goal. California state agencies use resources from the Greenhouse Gas Reduction Fund to support forestry projects that target tree health and wildfire mitigation.

Vella points to the 2013 Rim Fire southeast of Sacramento that burned more than 250,000 acres and took more than two months and $127 million to extinguish. It emitted an estimated 10 to 15 million metric tons of carbon into the atmosphere, roughly equivalent to the amount produced by 1 million Californians in an entire year.

Across the country from California, Scott Williams, an NWTF forester in Florida, has seen biomass used to supplement or partially replace income after a natural disaster. Following Hurricane Michael in 2018, many landowners who rely on timber as a source of income were left with a tangled mess of trees. Enviva, an international timber company with a mill in Cottondale, Florida, welcomed organic waste from damage caused to pine plantations and private forests. 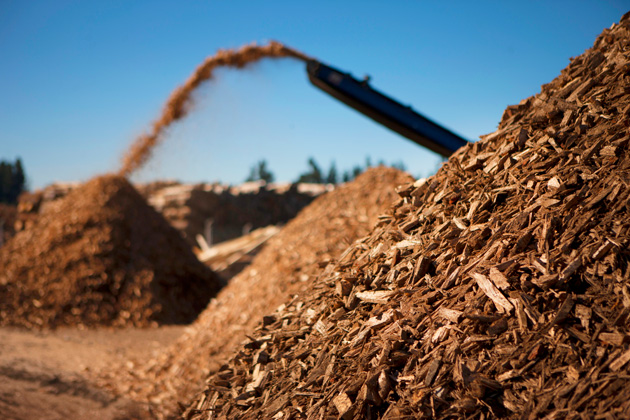 “Enviva provided what was the best and sometimes only option for many desperate landowners, allowing them to at least have their damaged land cleared to be a blank slate to start over,” Williams explained. “If it wasn’t for the service Enviva offers, there would be literally tons of timber left on the ground creating a wildfire risk and eventually growing over with a thick stand of primarily hardwoods. In events like this, companies that take this type of biomass are invaluable.”

NWTF staffers work to create forest restoration plans, including biomass roundup, for landowners to rebound from a potential disaster. The biomass is then run through a pellet mill to create wood-fiber pellets used in wood-burning stoves or to create heat that generates electricity for industries.

“This is just one example of how NWTF conservation for the wild turkey can impact energy production, industry, jobs and the local economy,” Hatfield said.

As Vella says, it’s going to take some time to cut our way out of the small-diameter dominated forests in the West. Projects in California and elsewhere (see sidebar) are using this woody biomass value to enhance more wildlife habitat acreage, instead of leaving it to burn in piles that release more carbon into the atmosphere.

There are other conservation-related biofuel projects on the horizon as well, like Missouri’s alternative energy approach to take methane from hog waste and turn it into natural gas (biogas). To do this, a process called anaerobic digestion breaks down the manure, but it needs vegetation like native warm-season grasses — also good for wildlife — to complete the process. In addition, recent legislation in the U.S. Senate, the Emergency Wildfire and Public Safety Act, aims to create grant programs to build more biomass energy conversion facilities and help develop an increased market for biomass. 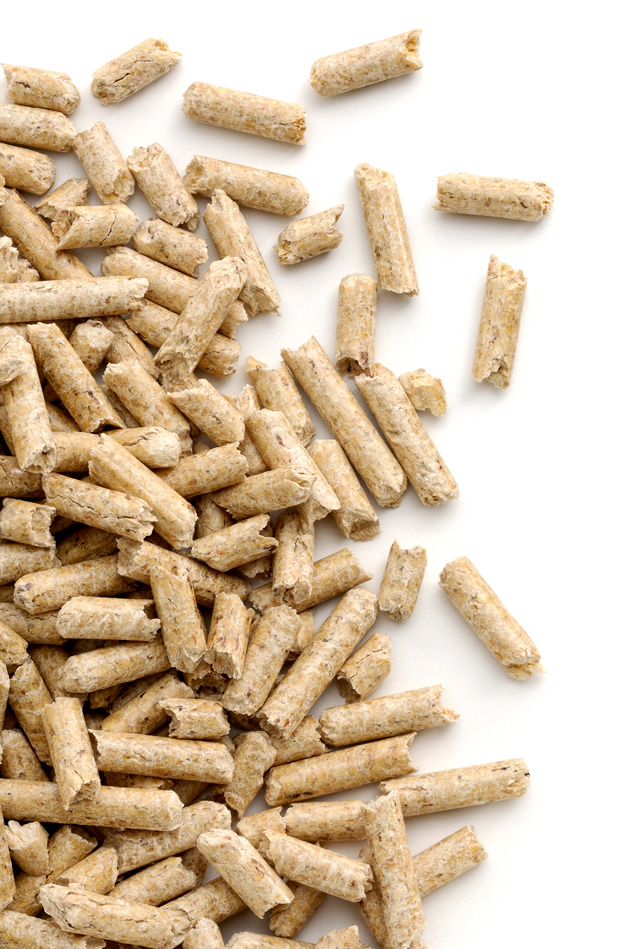 All of this amounts to a more efficient use of every part of the forest. At its core is conservation for the wild turkey, but the side effects improve the environment, protect a dissolving atmosphere and increase our enjoyment of the outdoors.