The NWTF and the Green Mountain National Forest, located in southern Vermont, are continuing their nearly two-decade-long Challenge Cost Share Agreement, aiming to improve and diversify wildlife habitat throughout the national forest.

Dating back as early as 2003, the Challenge Cost Share Agreement is a funding model between the NWTF and the USDA Forest Service in Vermont that allows the NWTF to aid in creating and maintaining wildlife openings throughout the Green Mountain National Forest, which also coincides with the Forest Service’s management plan in the state.

“The Green Mountain National Forest Management Plan lays out a goal for up to 5% of the forest to be managed as permanent openings,” said Matt DiBona, NWTF New England district biologist. “Reaching that goal is difficult, and this is where the NWTF steps in to collaborate with the Forest Service and support their management plan priorities, while also creating some excellent wildlife habitat.”

Much of the NWTF’s contributions on the Green Mountain National Forest translate into early successional projects; these include maintaining and restoring wildlife openings, pollinator plantings, soft mast production and more.

“To keep early successional habitats on the landscape for wildlife that depend upon them, we need to intentionally and continually create and maintain them,” said Scott Wixsom, biological technician on the Green Mountain National Forest. "This need can only be addressed through expanded partnerships that promote a stewardship ethic and lead to healthier, functioning ecosystems. With an ever-increasing demand on our natural resources, our ability to meet these challenges can only be accomplished through the development of partnerships, as with the NWTF, which foster a common vision of natural resource management.”

Over the course of the partnership on the Green Mountain National Forest, the NWTF has impacted hundreds of acres in all corners of the national forest.

Impacting acres on this scale, however, does not happen quickly. Rather, it is the result of patience and diligence, accomplishing five acres here, ten acres there and so on. Forest openings like these require regular maintenance through burning or mowing, or else woody vegetation gradually reclaims the opening and more costly solutions and mechanized equipment is required to restore the opening to the desired condition. Management is a constant.

“The projects in the Green Mountain, especially wildlife opening projects, take time and work, but the benefits for wildlife are well worth it,” DiBona said. “Wildlife openings, interspersed throughout the national forest, create a rich mosaic of habitat for wild turkeys to utilize, from brood-rearing, to roosting to foraging.”

An example of this determination was a recent mastication/wildlife opening project in the Manchester District of the forest, near Peru, Vermont. 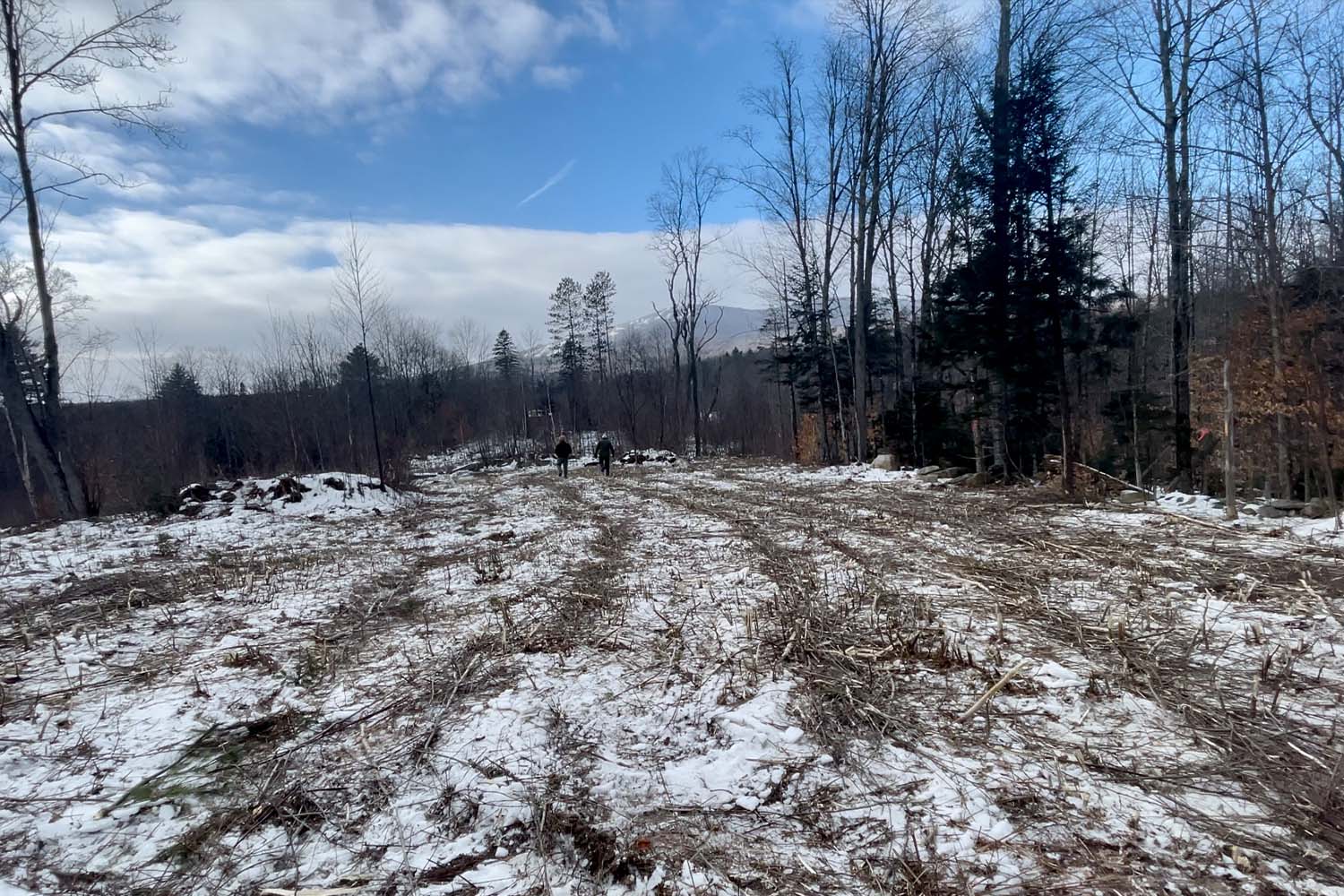 The NWTF contracted with Northeast Natural Resource Management to mulch down a mixture of birch and aspen in a five-acre wildlife opening that had become overly dense since it was last managed for wildlife, about seven years ago.

Nick Smith, owner of Northeast Natural Resource Management, was the forest manager for the project.

With a skid steer equipped with a front-end mulcher, Smith brought the 5-acre wildlife opening back to its former glory with about two days of mulching.

“Some of the birch and aspen were just too big and too dense,” Smith said. “It’s important to get in here before it grows larger, which would create more work and cost more money.”

Despite some troubles accessing the project site—caused by damp, soggy conditions—Smith was able to utilize a winter cold snap and the frozen ground to get the job done. 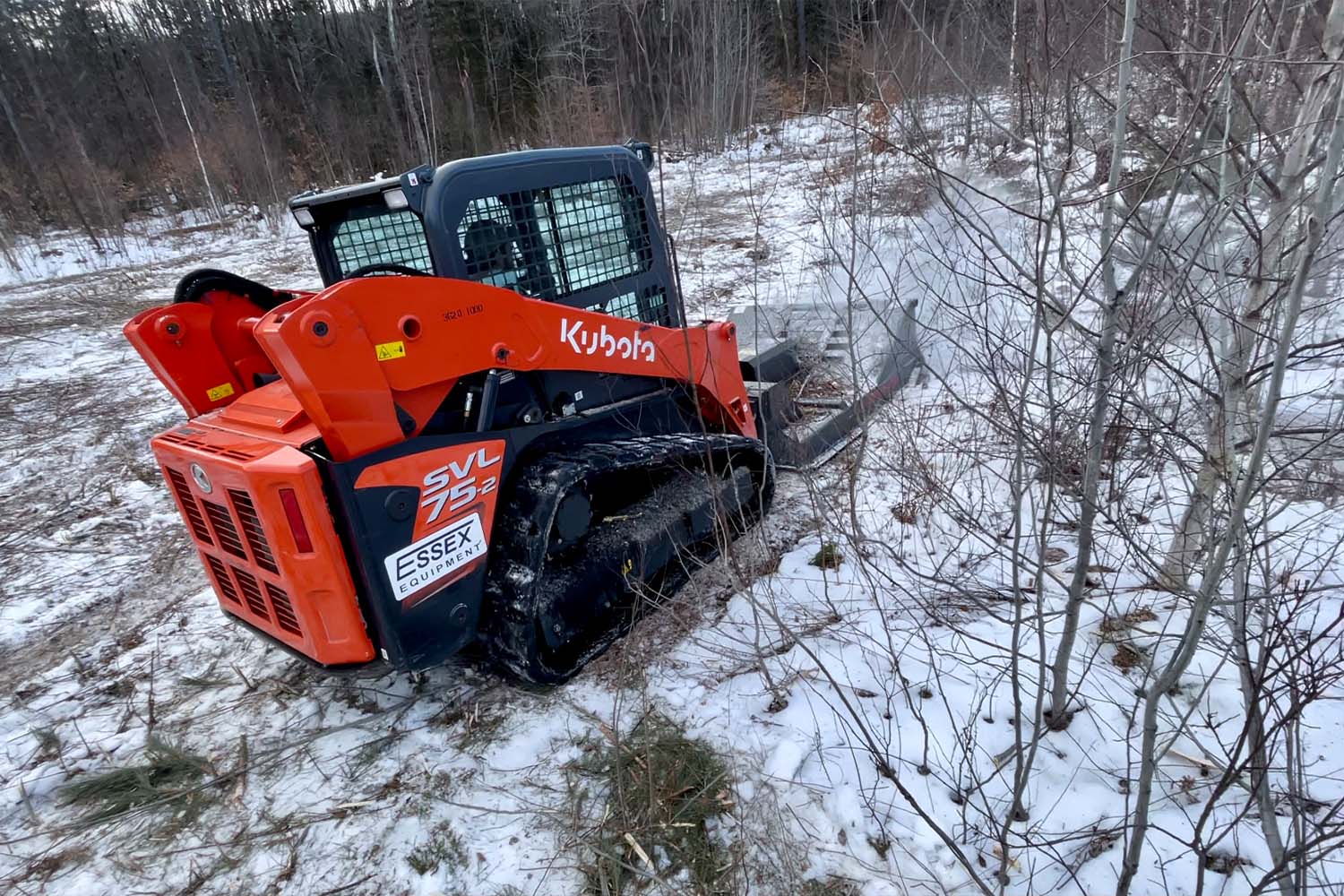 “The Forest Service will follow up on this site with prescribed fire, which will make this opening some of the best earl successional and turkey habitat possible, while also benefitting so many other species,” DiBona said.

In addition to wild turkeys, the project site will benefit an array of Vermont wildlife, including pollinators, black bears, white-tailed deer, song birds and more.

NWTF works with many qualified sub-contractors throughout the United States to accomplish this type of habitat improvement under a partnership with the U. S. Forest Service.

While you can find Smith all over the northeast assisting the NWTF with other habitat enhancement projects, the forest manager has rich history supporting the mission of the NWTF.

“As a longtime member and as a former competitive caller, I was going to a lot of banquets and events—still do—and met our New England biologist at the time, and he said that he was having trouble finding qualified contractors to do habitat work, and that there was a real need for it,” Smith said. “We were set up to help with that first project, which turned into us helping with another, and then our work in one state turned in two states. Now we help the NWTF and do habitat work all over the northeast.”

Smith has put competitive calling on the backburner (for now) and spends his time as a husband, forest manager, NWTF volunteer and pork farmer.

“As someone who has been involved with the organization for so long, it feels great to give back to the resource as a profession and as a volunteer,” Smith said. “The NWTF has no doubt been a part of my journey to get where I am today. It’s been an absolute blessing to work for the NWTF and also volunteer for the mission. I don’t feel like I go to work any day.”

“Contractors that have a passion for the job, such as Nick, bring a level of expertise, flexibility and dedication that have been very helpful on many projects all over New England,” DiBona said. “When your contractor believes in the mission the way that Nick does, it just sets us up for success. This is obvious through this project and all the conservation work across our Colonial Forests.”