To inhabit one of the northern-most habitats in the lower 48 and to still be thriving, wild turkeys in Maine must be cold-hardy birds, and indeed they are, but there are other factors at play that allow these rugged wild turkeys to thrive. In fact, Maine’s wild turkey population is doing so well that the birds are being trapped and transferred to help with the East Texas Super Stocking Program. And although the wild turkey is alive and well in Maine, it took dedication and interstate partnership to grow the flock, and it requires the same resolve and collaboration to sustain this success into the future and help restore the eastern wild turkey to its historic range in east Texas.

Like much of the country near the middle of the 20th century, Maine’s wild turkey populations were not what they are today. Shortly after the inception of the National Wild Turkey Federation (NWTF), turkey restoration efforts were gaining momentum throughout the country, including in Maine. Between 1977 and 1988, Maine received 41 turkeys from the Vermont Fish and Wildlife Department and 70 turkeys from the Connecticut Department of Energy and Environmental Protection.

“By the time turkeys were reintroduced into Maine, much of the state’s landscape had reforested after being cleared in the 1700s and 1800s,” said Matt DiBona, NWTF’s New England district biologist. “Turkeys readily adapted to this reforested landscape and were able to take advantage of dairy and other agricultural farms, as well as residential areas in southern Maine.”

The birds’ adaptiveness to the state’s frigid climate even caught some Maine residents and turkey enthusiasts off guard.

“I think biologists and hunters were surprised that turkeys survived and spread farther north in Maine than was previously thought possible,” DiBona said. “Turkeys currently extend into Aroostook County [northernmost part of the state]; however, these birds in northern Maine are subject to more severe winters and local populations can fluctuate based on environmental conditions.” 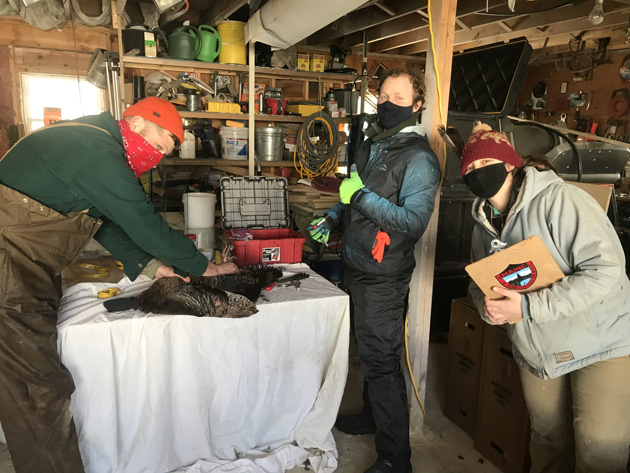 “Considering the health of Maine's turkey population, this is an opportunity for Maine to pay it forward to another state in need,” DiBona said.

Successfully capturing birds and relocating them to east Texas has been a collaborative effort between the Maine Department of Inland Fisheries and Wildlife, the Texas Parks and Wildlife Department and the NWTF.

MDIFW is focusing its trapping efforts in Wildlife Management Districts with high population estimates and high, stable harvests. Where possible, they are also trapping on areas where landowners are less welcoming of turkeys, such as dairy farms and private airfields. The winter of 2021 was the first year of a planned, three-year effort to provide east Texas with 50 birds a year. 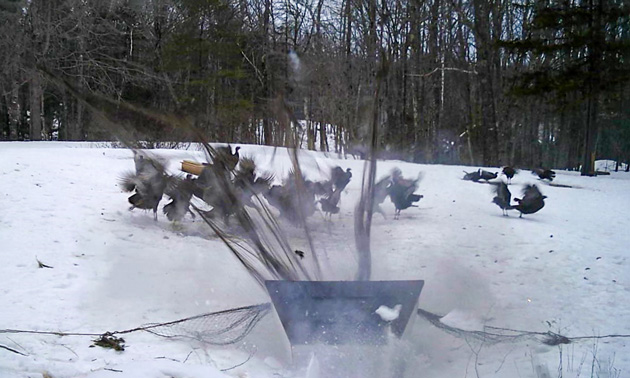 Alongside MDIFW and TPWD, the NWTF and its dedicated volunteers, too, play a critical role in facilitating this project.

“NWTF is providing logistical support by coordinating ground and air transportation between Maine and Texas,” said Carter Heath, NWTF regional director for New England. “Meanwhile volunteers from our Southern Maine Strutters Chapter got in on the action by running a bait site and assisting with trapping operations in southern Maine.”

Trapping wild turkeys over bait using a rocket net has been the go-to method for projects like these across the U.S. and has been a successful method for the last four decades.

“Winter is the easiest time to capture birds in Maine because the birds are gathered in large, winter flocks and snow cover limits easy access to food, which means the birds more readily take to bait,” DiBona said. “In order to minimize stress to the birds, MDIFW, TPWD and NWTF staff and volunteers work quickly to get birds marked, tested for diseases, transported on a commercial airline and released in Texas in under 48 hours.”

This first phase of the trap and transport has been an overwhelming success, exceeding the 50-bird goal with 76 birds, 40 being females and 34 being males.

“This project truly represents shared stewardship for the greater good,” Heath said. “For Maine’s abundant wild turkey population to have been seeded from similar efforts nearly a half century ago is a fulfilling realization of how far turkey restoration efforts have come and is hopefully indicative of how east Texas’ populations will look in time.”

In addition to the trap and transfer project, the NWTF has partnered with MDIFW on several habitat enhancement projects on Wildlife Management Areas throughout the state, focusing on a variety of field and forest enhancements for turkeys and other wildlife. The NWTF is also partnering with the USDA Forest Service through a new stewardship agreement on the White Mountain National Forest. The upcoming project with the Forest Service will focus on restoring nearly 50 acres of forest openings in Maine and New Hampshire in 2021.