The biggest wildfires in Colorado’s history burned during the 2020 fire season.

The wildfires came as no surprise.

“It’s what scientists are predicting: that we’re going to have more severe, earlier and longer wildfire seasons,” Dorsey said. “I think it confirms the need for RMRI.”

The Rocky Mountain Restoration Initiative is the NWTF’s shared stewardship pilot project with the USDA Forest Service, intended to demonstrate that a collaborative forest restoration approach by diverse stakeholders can protect wildlife, homes, land and the most important water supply in the West from bigger, more dangerous fires.

Travis Smith, NWTF’s Western water specialist, thinks the 2020 wildfires could help RMRI gain traction, providing “a window of opportunity for forest health, for watershed health, because it was a ‘What are we going to do?’ moment.”

The fires, along with the smoke that cloaked even the Denver metro area, “really spoke to everyone,” said Smith, a rancher on the Rio Grande River whose career in Colorado water supply and conservation goes back more than 40 years.

The RMRI strategy relies on the cooperation of diverse stakeholders, and water has proved to be the single most common concern among RMRI’s 40-plus partners.

“It’s the water connection that brings us all to the conversation,” Smith said. “Everything is connected by water.” 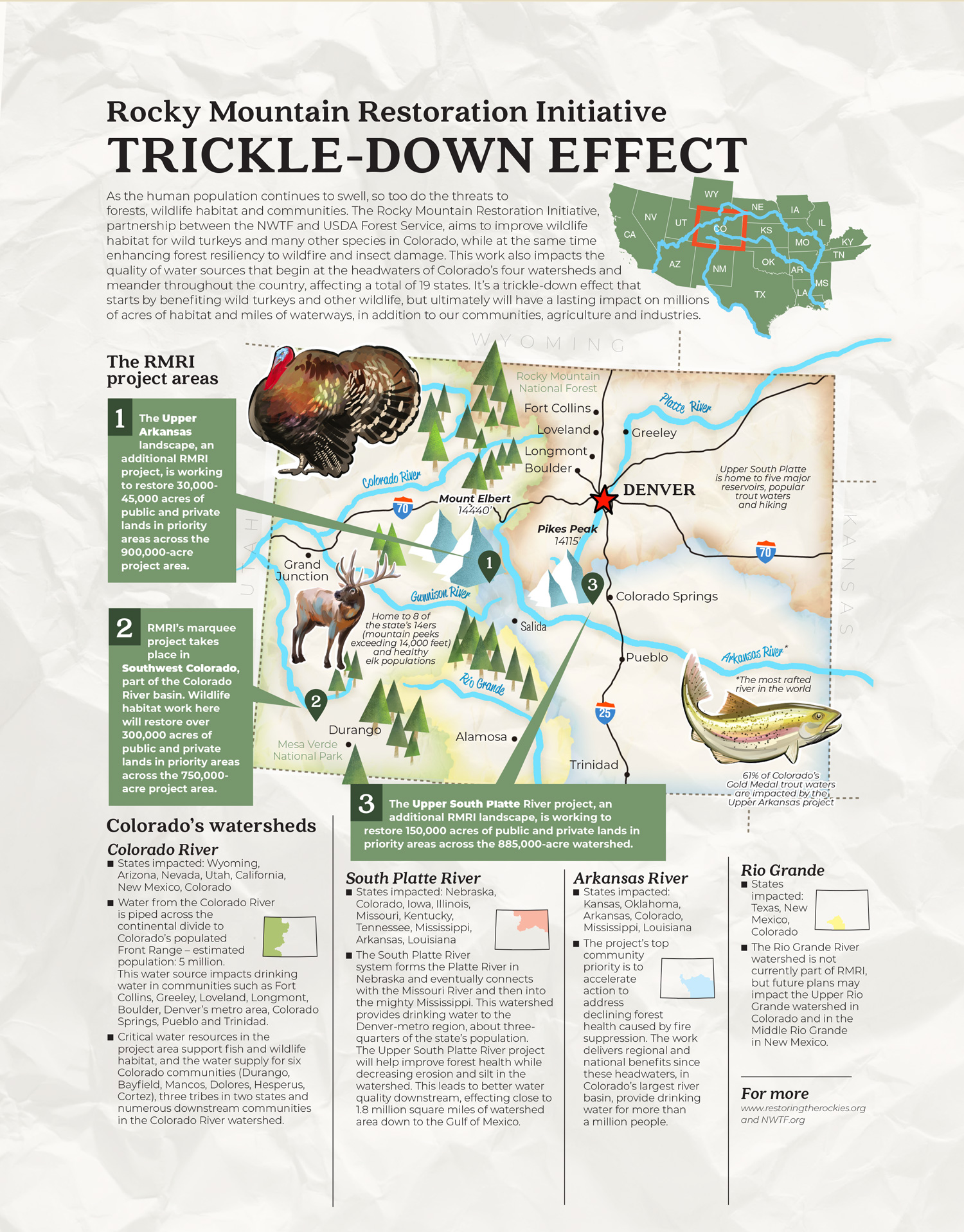 Brad Udall calls the climate trend in the West “aridification.” Udall is a senior water and climate research scientist for Colorado State University.

“We may get some minor breaks as the century unfolds — you know, five or maybe even a decade of wet years — but the long-term trend here is warming and drying,” Udall said in a March 2021 interview with National Public Radio.

In 2020, that amounted to the most days over 100 degrees in Phoenix (110 days) and the least rain ever recorded in Tucson (4 inches), Udall told NPR. Warmer temperatures have extended Colorado’s growing season, so plants are using more of the water. At the same time, more water is evaporating into the warmer atmosphere.

The Colorado River had plenty of upstream snowpack in the spring of 2020, but that snowpack resulted in only half the usual runoff.

According to Smith, about 150 million people depend on the four major rivers that originate in Colorado to provide clean, reliable drinking water and water for growing food, for healthy wildlife habitats and for recreation.

Every part of Colorado was experiencing abnormally dry weather as of March 30, 2021, according to the federal government’s U.S. Drought Monitor. A third of the state was in an extreme or, even worse, exceptional drought.

A wildfire destroys more than what is in its path.

“It has this long, lingering effect: the post-fire impact,” Smith said. It affects not only the water supply but also underground utilities and roads. Being evacuated disrupts people’s ability to work and be productive.

“Burn scars,” which create a potential for floods, also threaten Colorado’s creeks, dams, rivers and reservoirs that supply water to the West.

“All that ash and debris goes downstream,” Smith said, creating concerns for dam safety and lowering the storage capacity of reservoirs. Eventually, that water can overwhelm water treatment plants and jeopardize drinking water.”

Reducing the amount of hazardous vegetation in the forests that can fuel fires has already shown to protect water supplies thanks to a now-11-year-old program known as Forests to Faucets involving government agencies and the utility Denver Water.

In the case of 2018’s Buffalo Mountain fire in Silverthorne, Colorado, a $1 million firebreak saved an estimated $1 billion in infrastructure damage, said Christina Burri of Denver Water, one of the key partners in RMRI.

Part of Denver Water’s collection area in the Upper South Platte watershed is one of three areas planned for restoration under RMRI.

Call it what you will: “shared stewardship” or “inclusive conservation.”

Smith said it is time for more entities to take responsibility for protecting Colorado’s water resources.

“We can no longer rely on the federal agencies to do all the work,” Smith said. “It’s now up to Colorado and the local stakeholders to bring whatever they can bring, sharing in the cost. It’s not only money. It could just be the political will” — the will, for example, to allow logging trucks on local roads during tourist season or to tolerate prescribed fires.

The Forest Service has been researching how to restore forests to reduce the fire risk.

“They are the experts. They have the resources,” Smith said. “What they don’t have is an endless supply of money, and they need the social license to go and do what we know needs to be done.”

Colorado’s annual snowpack gradually melts in the spring and summer, draining into creeks then rivers and filling reservoirs along the way that supply water to agricultural operations and urban areas alike.

Under formal agreements, four major rivers supply water not only to Colorado but to 18 downstream states and Mexico: the Platte River to the northeast, the Arkansas to the southeast, the Rio Grande to the south and the Colorado to the southwest. The limited water supply serves 150 million people, and some areas, such as the Southwest, which have little other water available.

“We depend on water storage, and the snowpack is our biggest reservoir,” Dorsey said.

With the West growing drier, the Rocky Mountain Restoration Initiative is meant to demonstrate how restoring forests to benefit wild turkeys and other wildlife can also protect water resources and infrastructure from being damaged or destroyed by wildfires.