Wild turkey ecology research and turkey hunting often go hand-in-hand. This is especially the case in northern California’s Upper Butte Basin Wildlife Area where the NWTF and the California Department of Fish and Wildlife have partnered during the last six years to conduct wild turkey population research and open 4,900 acres to turkey hunting.

Prior to the partnership, the Howard Slough Unit of the wildlife area offered a few fall turkey seasons to eligible hunters with a California Type A waterfowl permit. With these fall hunts becoming increasingly popular among Californians, coupled with the seemingly vigorous turkey population in the area, it only made sense to offer a spring season; however, resources were initially limited to facilitate hunting and research.

In 2014, CDFW staff engaged the NWTF to assist with opening access on the Howard Slough and the Little Dry Creek units of the wildlife area for an organized, limited-draw spring turkey hunt.

“The NWTF applied for funding through the state’s Upland Game Bird Stamp Account and was awarded the necessary funding for all aspects of the project,” NWTF Pacific Coast Biologist  Kevin Vella said. “One of the main goals of this project was to secure six years of funding to support a seasonal position that could conduct a well-organized and regulated spring turkey hunt on the Howard Slough and Little Dry Creek units.”

In addition, funding supported a five-year trap-and-banding project to acquire data and monitor the effects of the new spring season. 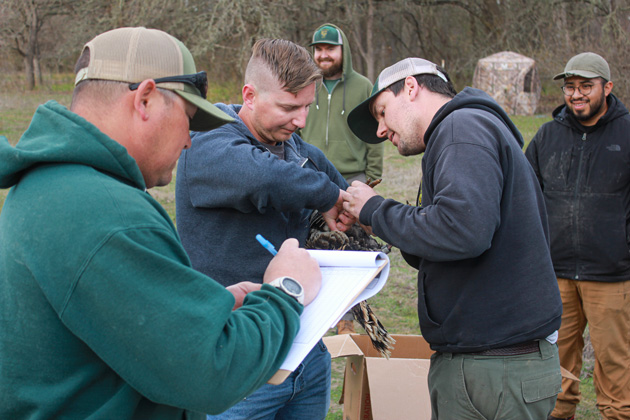 “We decided to take a scientific approach through band-return data from hunter-harvested birds,” Vella said. “With this method, we can justify running this hunt into the future, knowing that we weren’t negatively affecting wild turkey populations. This would help manage stable populations for future sportsmen and women. We decided that each of the five years we would try to capture and place leg bands on as many wild turkeys as possible, gaining as much data as possible.”

Between the waterfowl season and the spring turkey season, there is a short window to capture these birds on the Upper Butte Basin Wildlife Area, so it is crucial for the banding team to work as effectively as possible. Trapping sites are baited and monitored for a few weeks, and once turkeys start showing up consistently, an air cannon net is placed within reach of the bait site. When a sufficient amount of turkeys are within reach, a biologist will fire the net. The turkeys are quickly untangled, tested and sized, banded and quickly released.

“Since 2015, the team has captured 224 wild turkeys on the wildlife area, with 215 of those birds receiving bands,” Vella said. “Out of those 215 banded birds, 103 were males and 112 were females. Additionally, since 2015, we’ve had 12 reported band returns from turkey hunters. Two hens [in the fall season] and 10 gobblers. Those numbers are a great indicator that this hunt is having no negative effect on this population of wild turkeys.”

In 2018, the capture team began having suspicions that previously banded wild turkeys were actually having success removing the traditional butt-end bands from their legs. One CDFW employee even found a band that had been pried off below a historic roost site. The NWTF California State Chapter then funded the purchase of 100 rivet bands for the project – bands that could not be so easily removed. In 2019, the capture team began banding birds with both the butt-end bands on one leg and a rivet band on the other. Trail camera photos revealed that on a few occasions, within weeks of being captured and banded, several of the toms had already removed their butt-end bands. 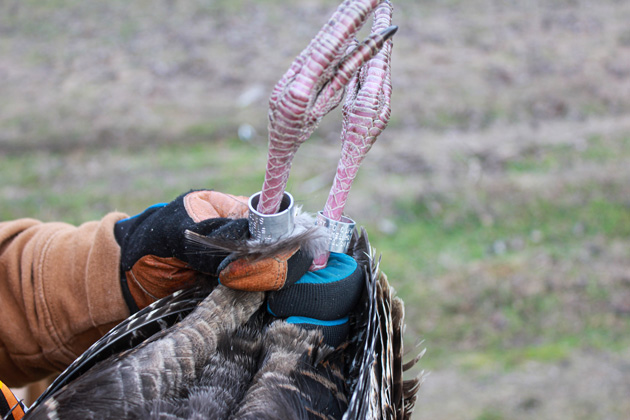 “This information could skew a lot of the data from our first few years of trapping, but we hope to have much better information into the future with the retainment of these new rivet bands,” Vella said.

This new hunting opportunity on the Upper Butte Basin Wildlife Area has become the most popular turkey draw in the state. In 2020, more than 2,000 applicants applied for 144 open spots. A total of 101 hunters harvested 35 birds.

“The spring hunts offered at the wildlife area have been so well-received over the last six years that the turkey hunt coordinator position and research will be a part of CDFW’s budget henceforth and will not require any additional funding,” Vella said. “This is the result of dedication and shared stewardship.”