The NWTF is continuing habitat enhancement projects on state game lands with the Pennsylvania Game Commission throughout the NWTF’s Allegheny Mountains Focal Landscape, part of its Colonial Forests Big Six regions for conservation.

“Oak woodlands, from a habitat point of view, are tough to visualize for most Pennsylvania hunters,” said Mitch Blake, NWTF district biologist. “So few acres of actual woodland habitat exist naturally on the landscape compared to what was present pre-European settlement. Historically, you would find a landscape freckled with oak and pine trees; a lush carpet of forbs, grasses, blueberry and huckleberry patches growing in the understory; and scattered clumps of scrub oak and mountain laurel. Today, these areas depict a totally different view,  one that is often characterized by a thick, impenetrable wall of mountain laurel and contiguous forest canopy that allows little sunlight to the forest floor.”

However, partners demonstrating the shared stewardship model, amplified by Pennsylvania’s 2009 Prescribed Fire Act, have been revitalizing woodland habitat throughout the state. 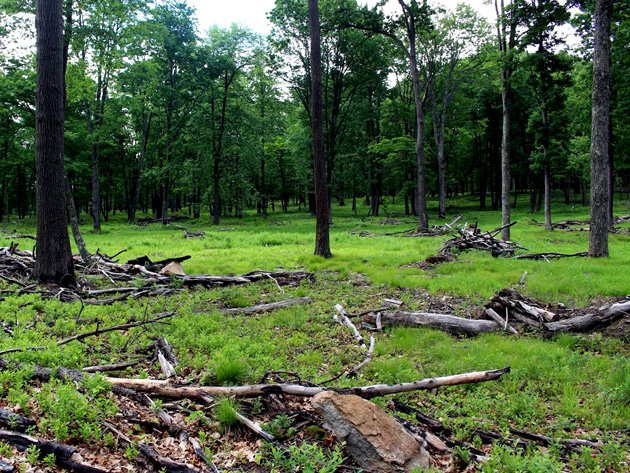 Several generous grants from the National Fish and Wildlife Foundation would jumpstart a series of much needed habitat and forest management projects throughout the north-central State Game Land system, particularly on SGL 75, 89 and 100.

“Funds from the NFWF grant paid for many initial forest management practices, including creating young forest habitat through timber harvests, improving structure and forage in mature stands and restoring areas of oak-pine woodlands through cutting and prescribed fire,” said Blake.

In addition to the NWTF, NFWF and the PGC, partners include American Bird Conservancy and the Indiana University of Pennsylvania who all collaboratively leveraged funding for the habitat management on multiple state game lands

“Collectively, over two thousand acres of woodland habitat have been or will be enhanced as a result of this concerted effort,” Blake said.

Wild Turkeys are not the only species benefitting from the habitat enhancement practices. Grouse, woodcock, cerulean warbler, wood thrush and many other native species are profiting from the shared stewardship efforts of all involved in the enhancements.

“I am very excited about the habitat that has been created so far and anxious for more woodland habitat to be restored,” said Blake.  “The PGC foresters and land management team have been doing a tremendous job and have figured out a recipe to restore woodland habitat using a combination of mechanical treatments and prescribed fire. The benefit to wild turkeys is unparalleled.”

In addition to the array of wildlife, outdoorsmen and women will continue to benefit from the habitat enhancements the NWTF and partners are implementing throughout the state. Many of these state game lands are coveted by turkey hunters in the spring and fall alike, as well as grouse and white-tailed deer.