Create a chufa plot this spring for wild turkeys and maintain it for years to come.

Creating healthy wild turkey habitat comes with creating diversity within the habitat. Providing a variety of food sources that maintain wild turkeys throughout the year within your food plot program can be essential to having gobbling turkeys in the spring. Planting clovers in the fall and a variety of spring summer mixes that may have sorghum, milo and millet can be beneficial. One key planting for turkeys has been chufa over the past decade.

Chufa originated in Spain and is in the nutsedge family of grasses. Commonly known as a nut grass, it grows in most sandy to loamy soils. The tubers or nutlets grown are what the turkeys consume as a food source, much like peanuts. Grown in late spring to late summer depending on location, chufa is great for wild turkeys and is also a good food source for waterfowl. Planted in shallow water depths, it can be a great attractant in your waterfowl impoundment.
In some states, chufa is not allowed due to it being considered an invasive species of plant. Check with local and state agriculture laws before planting. 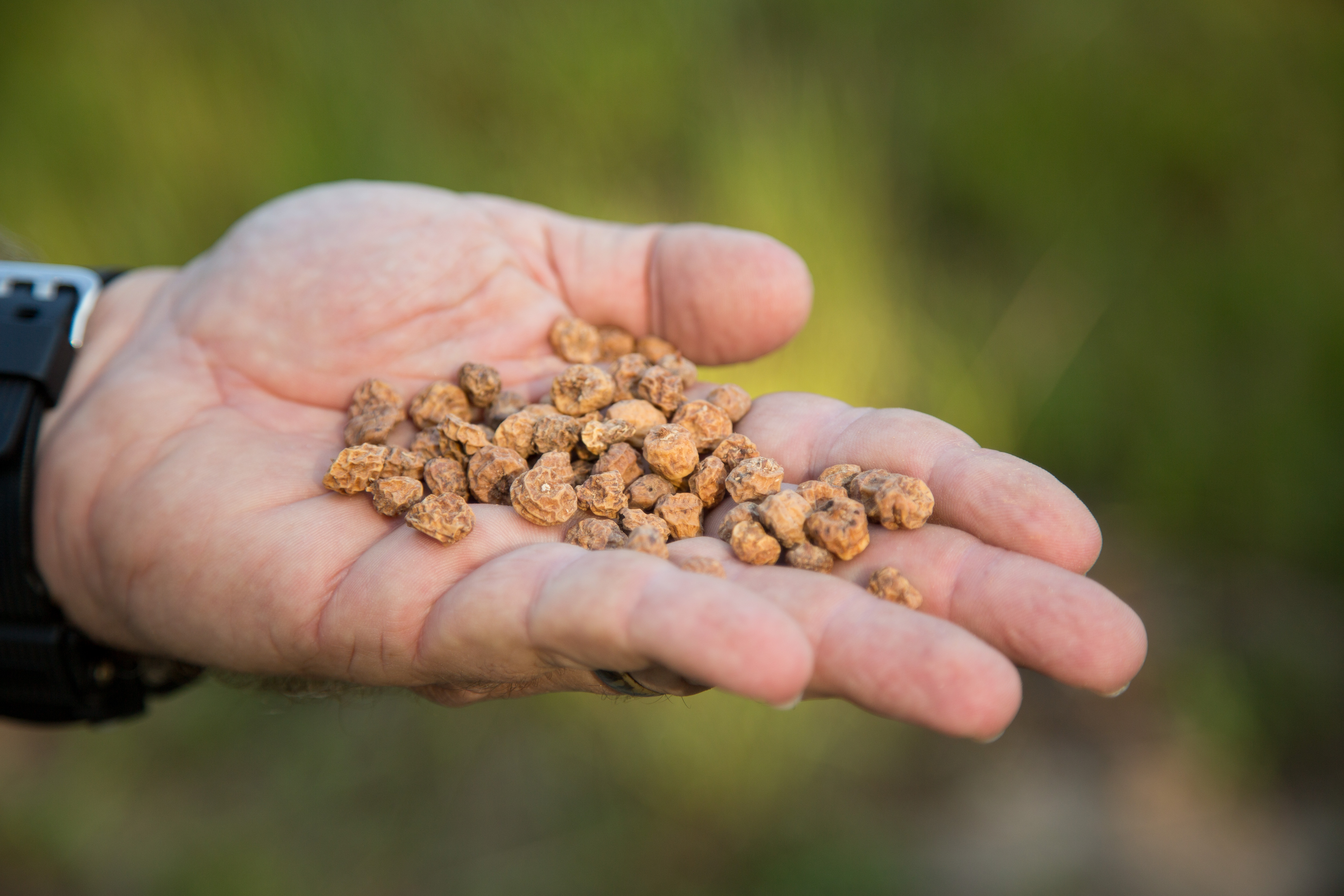 A soil test should be done prior to planting on the site you have selected to determine if lime is needed. Plant chufa in a clay loam or sandy loam soil. Chufa does not grow well in clay or rocky soils. Loose soils allow turkeys to scratch out the chufa tubers or seed. The area should be at least a half-acre to 2 acres in size in areas with adequate sunlight. Avoid shaded areas. Chufa needs up to six hours of sunlight per day. Do not plant in wooded areas with large trees. Chufa will compete with those trees for water in the summer months.

Plant late June up until the first two weeks of August. In southern states, we recommend planting in mid-July. Chufa takes 90 to 120 days to mature. Planting during this time will allow the chufa to mature into early fall. Most turkeys will be occupied with acorns, or fall food plots of clovers, wheat and oats.

Turkeys will tend to hit chufa plots late December and use them through early March leading up to turkey season.

Starting in early June, treat the site you have selected for your chufa plot with chemical herbicide. Apply glyphosate at the rate of 2 quarts per acre. Allow seven to 10 days for chemical to kill weeds or grasses.

Deep plow the area with either a disc harrow or bottom plow to establish a good seed bed.

Allow up to two weeks after bottom plowing before discing area. Apply a pre-emergent herbicide, such as Treflan, at the rate of one quart per acre directly to the soil. After it has been applied, the herbicide should be incorporated into the soil (lightly harrowed in).

The chufa seed can be either applied to the soil by broadcast spreader or by drilling. On a new plot, plant chufa at a rate of 50 pounds per acre. Drilling should be at the same rate and seeding rates should be set on the drill.
Apply 17-17-17 fertilizer at rate of 300 pounds per acre. Seed should be disced in at a depth of 1 inch. If you choose to use Dual Magnum pre-emergent herbicide instead of Treflan, it should be applied after covering seed. Apply at the rate of one quart per acre.

Steps to Control Turkey and Hog Use

To keep turkeys off plots, you can put cattle panels down on the field to keep turkeys from scratching and consuming chufa too early.
Use of electric fence can help keep hogs off of areas. Fence strands should be close together at the bottom to prevent small pigs from entering the plot. Fence can be about 3-foot tall, upper strands about 1-foot apart.

Chufa can be managed and re-established from the previous year of planting. Chufa is a nut grass that will come back each year by following some basic practices.

After two weeks you will be ready to prep the existing plot. Harrow the plot. Apply preemergent herbicide Treflan, one quart per acre. Lightly harrow in the Treflan herbicide. Apply 15 pounds of new seed to the plot. Apply 17-17-17 at the rate of 300 pounds/acre. Cover seed and fertilizer at a depth of 1 inch.

Apply dual magnum herbicide at a rate of one quart per acre after covering if Treflan herbicide is not used. Treat plots for grasses and broad leaf as needed according to herbicide use.
In some states, chufa is considered an invasive species. Check with local and state agriculture laws before planting.