I got up at 1 a.m., ate a quick breakfast and packed my car. By 2 a.m., I pulled out of the driveway — this was really happening — and drove for three hours in the dark, through Raleigh and into eastern North Carolina. The weirdest-looking doe I’ve ever seen eyed me from the side of the road in Pitt County. I kept going. I took a slight detour along the way but made it to the rally point (a gas station) by 5 a.m., where Zac Morton and Connor Bachmann met me. Zac, a director of development with the NWTF, is the mentor I was paired with from a learn-to-hunt wild turkey workshop I attended, and Connor, former NWTF regional director in North Carolina, knew the game land we were going to and had done some scouting and killed a bird there recently. I followed them to the game land, about 18 miles outside Plymouth.

We went to Van Swamp Game Land, which was full of turkey sign and absolutely beautiful. We got there about 5:30 a.m. (I had to run back to my car twice to make sure I had my hunting license and tag on me) and left my car and their trucks at the gate and walked in. Zac lent me a 20-gauge shotgun, and I ended up carrying it most of the day, which helped me get more comfortable with a firearm. 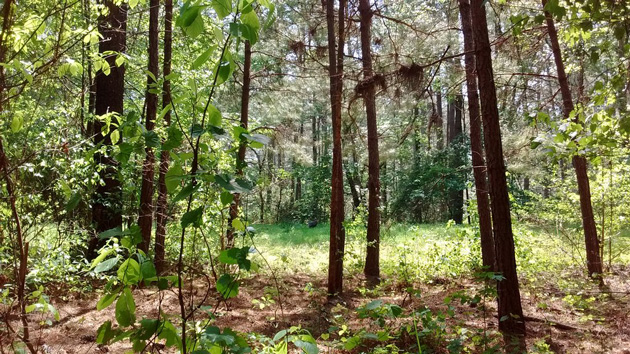 As daylight began to break, we heard a barred owl start hooting. "Who cooks for you? Who cooks for you all?" We all stopped and listened. No shock gobbles. We walked some more. The owl hooted again. Stopped. Listened. Nothing. A few more times and then we just kept walking while the owl hooted away. Zac used an owl call as the morning progressed and, at one point, got two owls fired up at him. He said it was too bad we weren't chasing owls!

It was cool hearing the owls and a whip-poor-will early in the morning, which I'd never heard in real life before (just one of many things you miss out on when you don't get up at crazy hours of the morning).

We came to a crossroads in the trail, and by then, the whole forest was awake with different birds and crows calling. Zac and Connor both heard two gobbles on the roost, but I couldn't hear them. We went down a couple different trails trying to pinpoint the turkeys they'd heard, but the birds shut up after fly down. And that was pretty much how our day went from there.

We walked, crow called and turkey called, but the gobblers were tight lipped after the two early gobbles. We never heard another peep out of them. We also drove to another access point and walked the trail there. No gobbles. Apart from a brief lunch stop at Bojangles, we were in the woods from about 5:30 a.m. until 3 pm.

We did set up in a couple places with decoys. The first setup was in the morning near a little creek where Zac and Connor put out a hen decoy on the other side of the creek bank. They also set up this cool portable blind. We all three sat behind that. I had the shotgun resting in my lap, my turkey facemask on, and I watched the decoy hen across the creek. I swear one time I saw it move!

Our afternoon setup was in a little open area just off the trail. That's where I took my selfie. They put out a breeding hen decoy, a jake decoy and another hen decoy, which I thought looked inviting. Then they set up the blind again, and we all sat in the woods, backs to a big pine tree. We were there a good while, but no turkeys showed themselves. I did some calling with a tortoise shell call and a wingbone call (which they thought were really cool), but the gobblers were not interested, so we called it a day. 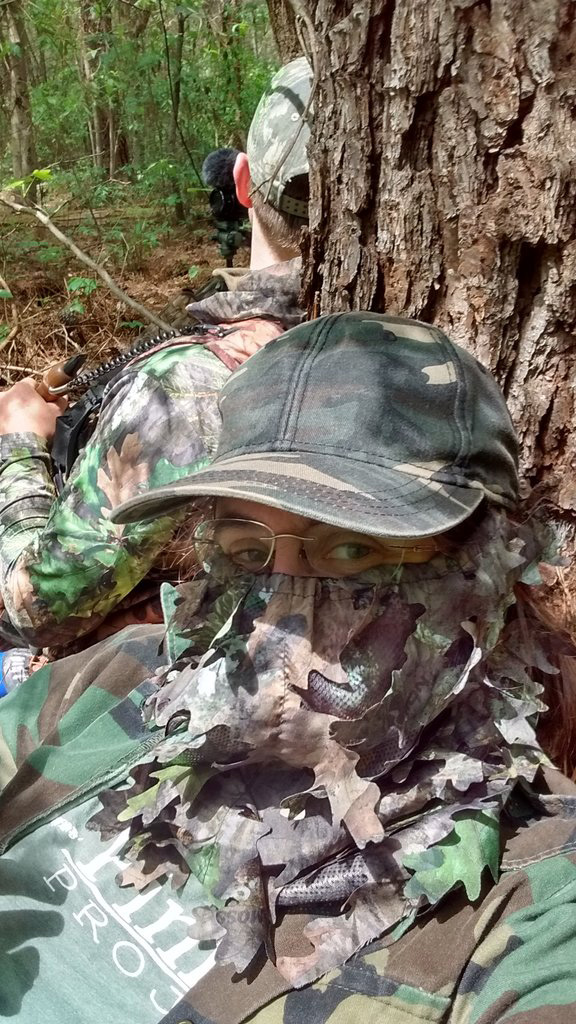 I saw so many awesome things in the woods that day. There were several beautiful butterflies everywhere along the trails. We saw a bunch of tadpoles in a big mud puddle and five wood ducklings swimming in the little creek. Wood ducks flew overhead. A couple lizards also made appearances. We spotted lots of turkey tracks and found turkey and quail feathers. I got to sit and enjoy almost a whole, gorgeous day in the sunlit woods. It was amazing. I was exhausted (even experienced turkey season sleep deprivation first hand!), but I enjoyed every minute of it.

At the end, Zac and Conner gave me so much cool stuff: turkey calls, a camo bag, a hen decoy and a crow call. I've never seen so much generosity as I have in the hunting community. People have been so kind with giving their time and their wisdom in answering all my newbie questions, and I've been gifted some amazing stuff, which I can never repay, but am truly humbled by.

My first turkey hunt was one of the best days ever for me — kind of life-changing in some ways. I know that I definitely want to do this and keep chasing turkeys and other wild creatures. I might even get over my shotgun anxiety and get a turkey gun. If not, I’ve at least got renewed energy for my archery practice in the fall. I’m thankful to everyone for all the great advice and gear. I can't say thank you enough. You’ve added one more turkey hunter to the flock. Hope to see y'all in the woods someday.