Human lives lost, livestock and pet deaths, impacted wildlife populations and habitat, millions of dollars in infrastructure and property damage, livelihoods and economic stability destroyed. All of these things, and more, are the result of catastrophic wildfire. They may be near-apocalyptic in their destruction, but with the right attitudes, partnerships, planning and treatments, they are mostly avoidable.

Prior to colonization of North America, natural fires lit by lightning routinely rolled through the forests and grasslands, undisturbed by humans, and removed ground litter, deadfall and other fuels and created a disturbance that refreshed the forest, opened seeds, thinned tree densities and exposed the soil to sunshine that encouraged new undergrowth. Depending on the region, natural fires could routinely burn a forest every 10, 15 or 25 years.

Nature’s own management of forests and grasslands was so efficient that Native Americans replicated the process by setting fire to forest floors and grasslands where they lived to encourage the benefits on a more frequent basis versus awaiting a natural fire.

Fire was natural on the landscape. The forests were adapted to it, even depended on it. Fire was an important component to the health and resilience of ecosystems across the country. It wasn’t until the early 1900s that fire took on a different meaning, and society decided it was a bad thing that must be stopped.

As our country was settled, our forests were crucial to our economy. Forests were cleared to build farms, cities and industries. Our economy was dependent on timber, and fire suppression was a tool to protect our future, our commercial timber supplies and our security. Those same concerns about protecting timber supplies and watersheds helped early conservationists urge the U.S. government in 1891 to begin setting aside the national forest reserves.

The Great Fire of 1910 that burned 3 million acres in the western United States shaped the USDA Forest Service, recognizing it for its firefighting efforts and doubling its budget. Natural fires were no longer allowed to burn themselves out.

Later, as more generations of Americans moved to cities, nature became something to experience on the weekends at a local recreation area or national park. People moved farther away from seeing how nature actually works and closer to seeing it as an idealized image that better fit within their own sensitivities and proclivities. The ability to see the benefits of natural fires also fell casualty to this world view. Logging also became a four-letter word. Nature became something that must be protected at all costs.

Regardless of the root cause, the fact remains that many of our nation’s forests are in a worse condition than ever before. Some people think that their use of the forest is in direct conflict with traditional forest values and uses. The cultural divide between protecting every living part of the forest vs. using the forest for beneficial means is seen as an irreconcilable conflict. Yet, protecting what we care about and actively managing our forests are not only compatible, they are dependent on one another. We are at a point where attitudes must change if forests are ever to recover. 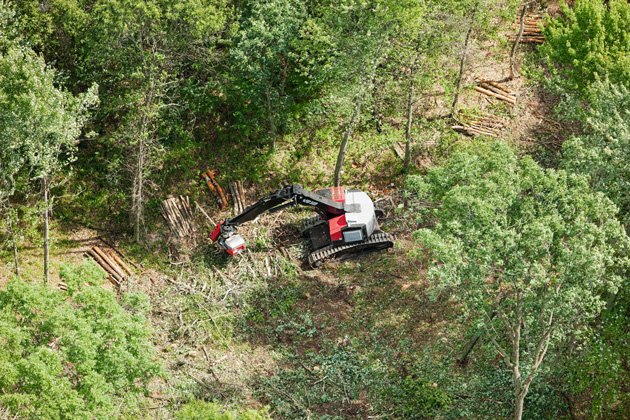 With forests in their current state, wildfires can pose too much risk to humans, communities and infrastructure, so allowing wildfires to burn themselves out is not often possible. Our best option, today, is to actively manage the forests in the wildland urban interface (where civilization and nature meet) and reset them ourselves through mechanical means.

The NWTF and our many partners work tirelessly to do just that. Through our partnerships with federal and state forest owners, we are able use active forest management techniques, backed by science, to reduce the likelihood of catastrophic wildfires in areas we treat.

Active forest management includes a number of tools that put forests back into a state where fuel (old growth and debris) is limited, and they’re resilient enough to withstand drought, insects and disease and, ideally, natural fires once more. Cutting trees is a key tool in this toolbox, whether a management plan prescribes thinning a timber stand, clear-cutting, removing snags (dead standing trees) and ladder fuels or mulching of small-diameter trees and shrubs.

Once thinned, managers can then use low-intensity prescribed fire, where it’s appropriate, to further reduce fuels and encourage understory growth that benefits wildlife. A forest that has been treated in this manner and maintained on a regular schedule protects communities, travel corridors, infrastructure, watersheds, water resources, jobs, wildlife habitat and other values.

For land managers of public lands and even large private lands, this is part of their job. But it also takes communities and owners of smaller private woodlots working with these partners to improve forest health in and around neighborhoods, towns and important infrastructure and to create buffer areas where unplanned fires can be contained.

The Forest Service’s Shared Stewardship approach does just that. Partnering with multiple stakeholder groups — federal, state, county and municipal governments, industry, water and recreation interests, as an example — to work across public and private land boundaries to accomplish forest restoration at a large, contiguous scale. It’s the “All Hands, All Lands” approach, and it is the future of how our nation’s forests will get the much-needed care and management that has been diverted for so long.

For an example of shared stewardship in action, read about the Rocky Mountain Restoration Initiative, an innovative, multi-stakeholder approach co-convened by the NWTF and the Forest Service to address forest restoration and shared values in Colorado.