I Fell in Love with Turkeys … By Not Shooting One

The NWTF quickly became a special organization to me because of its work, and because I would not be seeking a career in the outdoor industry or pursuing the outdoors as passionately as I do now if not for the organization.

Despite growing up in a hunting household, I did not have an interest in hunting until I was 16 when I met kids around my age who enjoyed deer and pheasant hunting. Though my dad hunted deer from a young age, he had never hunted wild turkey. I knew next to nothing about turkeys and had little shotgun experience. Regardless, I knew the importance of conservation and decided to apply for an NWTF scholarship. I never dreamed it would change my life. I was invited to the 2017 Ohio NWTF-ODNR Youth Partnership Hunt, organized by Gene Goodwin, a former president of the NWTF National Board of Directors. Ten students were each paired with a hunting guide, a landowner who had volunteered use of their property and given everything needed for the event.

Without my guide Brett Berry, I would have been beyond lost. He called for the turkeys and walked me through everything. The first day was miserable and rainy. We sat a good part of the morning in a blind without seeing or hearing anything. When the rain slowed, we traversed the property. Though Brett had been calling intermittently, it was thunder that incited a gobbler to reveal himself. We eased our way through the woods toward the sound, finally locating the turkey in a large field.

The rest of our hunting party supervised as Brett and I crawled about 100 yards into the field. There were two sizable gobblers and a hen out in the field, the former still gobbling at the thunder. By this time, the rain had returned. I hardly noticed. I removed the scope caps from my red dot and readied myself for a shot. Brett continued to call, folding his hand into a shape resembling a turkey’s head as he was calling. The gobblers were intrigued.

Finally, I saw the head of one gobbler come into view. I pulled my gun into my shoulder and set my head on the stock, ready to take a shot. Peering through the scope, I could see nothing clearly. With all the excitement, I had not noticed that the rain and wet grass had soaked the glass, blurring the red dot. I could still not see well enough to take a confident shot before the gobbler disappeared. I was disappointed, but not upset. As a hunter, it is my responsibility to take an ethical shot. 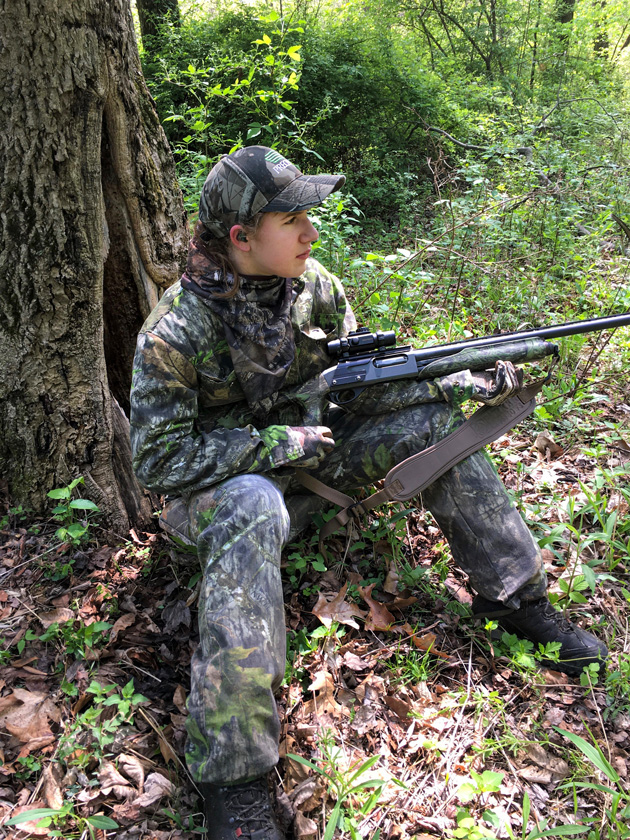 I learned more from my first day turkey hunting than I have learned from any other hunting adventure. Bonds form that no one can explain, and I knew then it was now my responsibility to introduce more people to hunting. I also felt prouder choosing not to shoot than I would have harvesting a turkey. Conservationists and hunters must prioritize a safe, ethical shot every time.