The Ashland Ranger District in the Custer Gallatin National Forest is well known for the big and small game hunting opportunities it provides Montana residents and nonresidents alike. However, severe winters with excessive snowfall sharply reduced many upland game species’ populations in the area, including wild turkeys.

This area known as the 20-mile area contains various grasses and forbes that were planted back in 2012 to improve both grassland conditions and wildlife habitat. However, due to intense drought, it has converted to a monoculture of crested wheatgrass. Encompassing several spring streams and Otter Creek, this 50-acre parcel provides great opportunities to enhance habitat from previously degraded conditions. 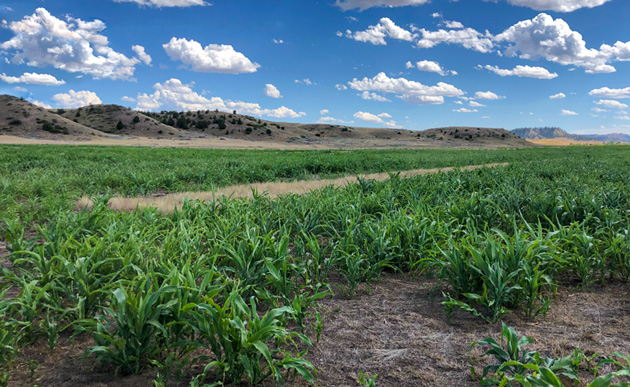 In response to the degraded conditions, the Forest Service devised a multi-year restoration plan to not only replace the monoculture of crested wheatgrass with beneficial native grasses, but to also increase ground cover for wild turkeys and other game birds.

“In order to restore these areas, native trees and shrubs were planted in spring 2019 and 2020 along ephemeral streams and creeks in the area,” said Lenora Dombro, Forest Service wildlife biologist. “Trees and shrubs were planted in small mixed groups of four to five and surrounded by tree fabric to reduce competition from weeds and other native plants. In order to protect from browsing pressure from elk and deer, 50” x 16’ cattle panels were utilized to construct cages around groups of plantings, allowing them to root.”

“This area is already beginning to see the benefits of the first phase of this project, and we are looking forward to helping complete the other phases of this project, which include prescribed burning, herbicide treatments and establishing a diversity of native perennial grasses,” said Collin Smith, NWTF district biologist. “This area is a great example of the symbiosis between conservation efforts and wildlife habitat development.”