Living at Their Limits

Maine’s wild turkey restoration is a conservation success story that dates to the 1970s and paved the way for the healthy, vibrant population we see today.

Huntable populations of turkeys were initially established in Maine’s two southernmost counties. However, trap-and-transfer efforts continued through 2012 and allowed the population to expand into the northern and eastern parts of state. Today, turkeys reproduce in all Maine counties. Hunters enjoy a five-week, two-bird-limit spring season and a six-week, five-bird fall season in many areas.

Humans may have launched the restoration, but the birds get most of the credit, thriving where it was once thought impossible, enduring frigid, snowy winters and cold, wet springs. Over the last 30 years, turkeys have transitioned from being a curiosity to being commonplace, and even considered nuisance by some folks.

Maine’s Department of Inland Fisheries and Wildlife is now challenged with balancing the need to manage turkey populations to provide quality hunting opportunities with the desire to maintain populations at a level that minimizes conflict among farmers and the general public. During recent revisions of the big game management plan, Maine’s IFW staff realized more detailed information was needed to better manage turkeys and began a cooperative research project with the University of Maine.

“They saw this as an opportunity to develop tools to manage at a finer scale,” NWTF District Biologist Matt DiBona said. The research would provide information on population dynamics, survival and harvest rates, habitat use, reproductive success, seasonal movement, disease prevalence and transmission, and a population estimate.

“We wanted more local data,” said Scott Lindsay, Maine’s Region A biologist. “We wanted to see how turkeys interact with their habitat and with humans and learn more about what important nesting habitat really is. It’s a multi-tiered approach. We’re trying to look at every factor affecting the turkey population.”

From 2018 to 2020, the collaborative team, augmented by NWTF volunteers, captured and banded 890 turkeys in four separate study areas chosen to reflect differences in habitat and human population density and land use. They fitted both females and males with transmitters, purchased with NWTF funding.

They also collected blood and other samples for pathogen diagnostics. Technicians then followed the birds’ movements, investigated nest sites and evaluated habitat use and mortality rates and sources. 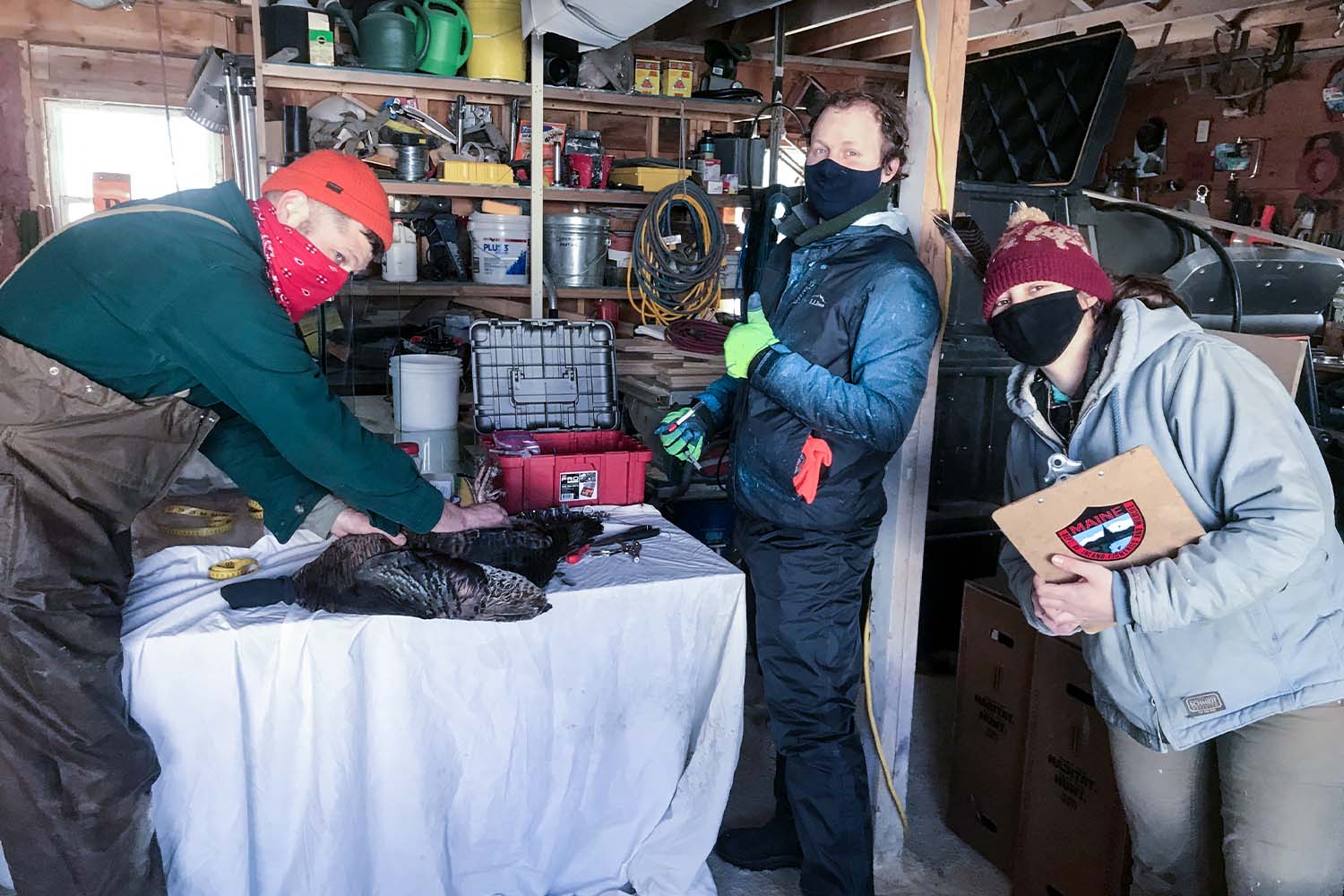 As expected, harvest rates varied across Maine, generally higher in the southwest and lower in the north. The high number of banded birds let researchers use an integrated population model that combines band recovery, harvest reporting and telemetry data to estimate spring male turkey populations at 31,677 birds in 2018, 32,512 in 2019 and 33,500 in 2020.

“We can estimate our total spring population at around 70,000 birds, which was very close to pre-study estimates,” IFW Turkey Biologist Kelsey Sullivan said. “This is a far smaller number from what we see in the fall directly after nesting season, when the population would be much higher.” Fall is when the most turkey-related complaints occur.

A general management guideline is to delay hunting seasons until most female turkeys have mated and carry fertilized eggs. Hunters can harvest gobblers with minimal impact to reproduction and nesting.

One important finding after three years of monitoring GPS and radio-tagged females is the nest initiation date is consistently around April 30.

“This is key to supporting our current spring season start,” Sullivan said. “Our season timing also minimizes disturbance on nesting females from turkey hunters and the potential to cause nest abandonment. We often receive requests to start the spring season earlier, but based on our study, our spring season timing is correct.”

The team found evidence for variable survival rates throughout the year. Not surprisingly, most mortality occurred in May, during the period of peak nesting activity. Hens are often vulnerable to predation while nesting.

Disease may also partly explain some of the observed variation in survival. About 17% of sampled birds had reticuloendotheliosis virus, an immunosuppressive and sometimes tumor-forming avian retrovirus. Another 57% had lymphoproliferative disease (LPDV), a cancer of turkey and chickens caused by a retrovirus. Increased mortality was seen when turkeys had both conditions. Hens with LPDV also had smaller clutch sizes.

Movements and Space Use 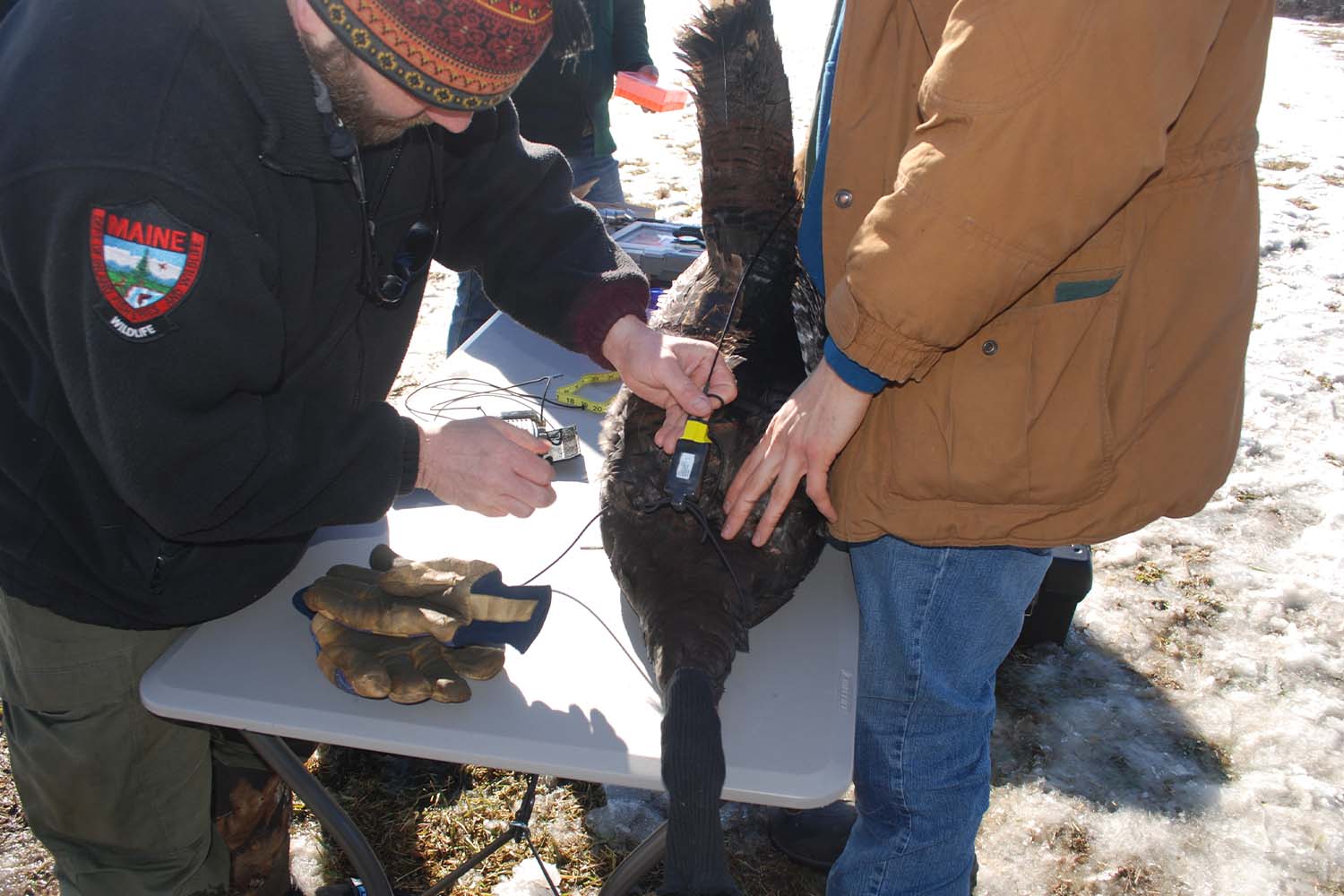 Understanding turkey movements is important when trying to manage turkeys at a smaller spatial scale, such as an individual Wildlife Management District (WMD) ― after all, turkeys don’t recognize map boundaries. On average, hens moved approximately 5 kilometers when dispersing from winter areas to nesting areas, but movements up to 23 kilometers were observed. Researchers said that information was useful.

“There can be high degree of variability in turkey densities and favorable habitat among WMDs,” said Sullivan, adding that one goal is to increase turkey numbers in low density districts. The research provides information on movement among districts, information that could be useful as harvest goals are developed for those low-density districts.

None of the results were surprising or outside expectations, something deemed positive. Maine’s conservative approach to increasing hunting opportunity, season lengths and bag limits seems to have worked well. Harvest rates of male turkeys were lower relative to some other northeastern states that had collected similar data.

“This means that even with all of the recent changes in bag limits and seasons, we’re still within range of sustaining a good, harvestable population,” Sullivan said.

Maine wildlife managers see the project as a big step forward. The next phase is creating an adaptive harvest management system, something that lets managers annually review data and adjust accordingly. Balancing the preferences of various interest groups ― some who want more turkeys and others who prefer fewer birds ― will be the ongoing challenge.

The birds, at least, seem to be doing well.

“They’re holding their own, so we have time and enough of a buffer to develop a solid management plan that hopefully will address everyone who has an interest,” Sullivan said.

Of NWTF’s financial and logistical support, DiBona said, “What appealed to us about this project was how it attempted to address a real-world information gap and use research in an applied fashion. It involves using good science to better manage the population, providing enough turkeys to keep hunters satisfied but also at a level acceptable to the public. We need that public support.”