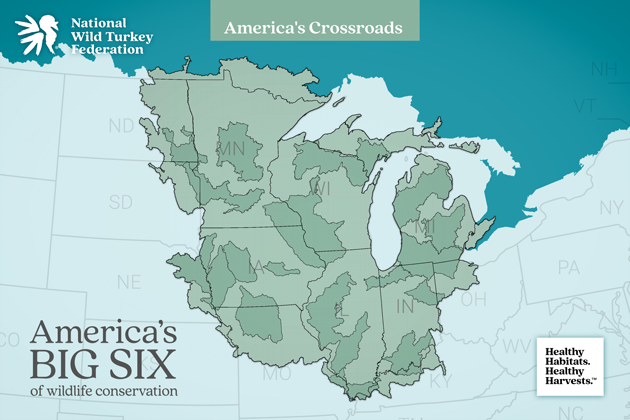 Today, for our National Week of Conservation, we are highlighting some of the great work the NWTF is doing in its America’s Crossroads.

America’s Midwest is as diverse as its land use. It’s where hard working families farm, mine and log to provide resources for our nation. Midwesterners cherish the recreational opportunities the land offers and build strong family legacies tied to the land. This region has also built the national reputation of having some of the highest turkey population densities and consistently produces more trophy class white-tailed deer than anywhere else in the country.

Forests in the Crossroads provide essential wildlife habitat for turkeys and many game and non-game species. However, a lack of active forest management is negatively altering forest stand composition and structure. The forests that echoed with gobbles in the spring and built the “land of the giants” are rapidly converting to something much less productive. The average Crossroads forest is overstocked, allowing shade tolerant natives like maple, beach, elm and nonnatives like honeysuckle and buckthorn to become dominant in the understory and midstory. These will become our future forests in the absence of active forest management.

Less than 1 percent of our country’s native tall grass prairies are still intact. This is obvious all throughout the Crossroads region where wildlife-rich prairies once dominated the landscape have been reduced from their former glory.

Additionally, intensive agriculture and development has drastically impacted the quality and quantity of the area’s creeks and rivers. Proper management of these riparian ribbons of life is critical for filtering agricultural nutrients, preventing erosion and providing crucial wildlife habitat.

We must be proactive to restore and enhance these remaining areas for the benefit of wildlife and outdoors enthusiasts.

Luckily, NWTF volunteers, wildlife biologists, foresters and partners have joined forces to actively manage forests and grasslands for the betterment of wildlife and the people who enjoy them. Habitat management such as timber harvests, forest thinnings and prescribed fires are working to keep our Crossroads healthy.

Some great examples of the work the NWTF is doing across its Crossroads region range from prescribed fires to tree plantings. Here are some recent projects:

Since NWTF’s Crossroads is dominated by private land (over 90%), working on private land is essential to be effective at influencing habitat quality at a landscape level. One way this has been accomplished is to assist with the purchase of habitat enhancement equipment for use on private land. Hundreds of seed drills, UTV’s, sprayers, prescribed burning equipment, disks and more have been purchased and donated to state or federal agencies to be loaned out for use by private landowners.

Regional projects include the work NWTF state chapters fund through the NWTF Super Fund. Super Fund dollars are raised by NWTF local chapters to benefit projects in their respective states. Projects like this include creating wildlife openings on WMAs or creating early successional habitat in national forests, among a myriad of others.

NWTF’s Crossroads is involved in multiple landscape-scale initiatives, including the National Forestry Initiative, Northern Plains Riparian Initiative, White Oak Initiative, and the forthcoming Waterways for Wildlife Initiative. For more on these and other NWTF landscape-level initiatives, click here.

Partners in NWTF’s Crossroads projects and initiatives include:

Wild turkey ecology research is the guiding star for much of the conservation work the NWTF implements, and it is also crucial in addressing population declines, especially in the Crossroads region. The NWTF is currently assisting in the following project in its Crossroads:

Policy is another major part of the NWTF’s mission that is housed under the conservation of the wild turkey and the preservation of our hunting heritage. In the Crossroads region, the NWTF has been involved in the following recent legislation:

Missouri: The NWTF signed on in support of the Missouri omnibus bill (HB369) that included prescribed burning liability language

Ken Buchholtz, Michigan. Buchholtz developed the Wheelin' Sportsmen program in Escanaba, Michigan because of a concern for the lack of infrastructure available for folks with accessibility issues. He has worked tirelessly to secure funding and partners to create permanent hunting blinds and trailers to remove these barriers. He created the blueprint for the design of these “accessibility trailers,” which are being used nationwide. He is someone who truly embodies the lifestyle of the NWTF and works year-round creating opportunities for people to enjoy the outdoors. His relationships with community and state-level leaders allows him to continue to grow the Wheelin’ Sportsmen program throughout the Upper Peninsula of Michigan.

Indiana State Chapter has helped promote the conservation seed program established in Michigan through building relationships with the Michigan State Chapter and expanding the offerings to members and to state agencies. This program has grown in Indiana every year and will allow NWTF to help conserve an additional 1,000 acres in Indiana in FY2021.

Tracy Neuburg-Whelan, Wisconsin. Neuburg-Whelan has hosted award-winning Women in the Outdoors events. The Wisconsin State Chapter  has hosted over 20 women’s events focusing a portion of the event on hunting, hosting a learn to hunt class and recruiting several new hunters. A typical event will offer over 20 education classes each year.

USFWS Fish and Wildlife Program. NWTF’s Crossroads is over 90% privately owned, so significantly impacting habitat quality at the landscape scale requires working on private lands with private landowners. NWTF has been partnering with the USFWS and the Missouri Department of Conservation since 2009 to provide a cost-share program in the Missouri-Iowa Oaks focal landscape. Landowners through this program have become strong NWTF supporters. Although their turkey populations are responding well to their management efforts, they still share a deep concern over the regional turkey decline they are witnessing. This group of landowners has been instrumental in organizing a larger group of concerned turkey hunters to raise significant funding for current and future research designed to identify management-oriented solutions to turkey declines.