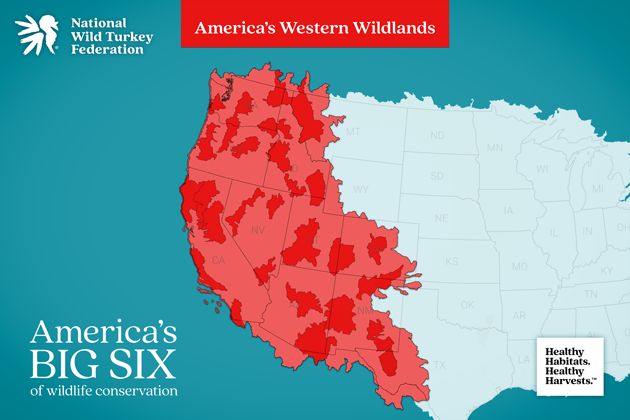 The NWTF’s Conservation Week will highlight this all-encompassing work through the NWTF’s America’s Big Six of Wildlife Conservation, which encircles the entire continental U.S.

Today, we are highlighting some of the great work the NWTF is doing in its America’s Western Wildlands.

Since 2018, The NWTF has conserved and enhanced 65,231 acres in its Western Wildlands 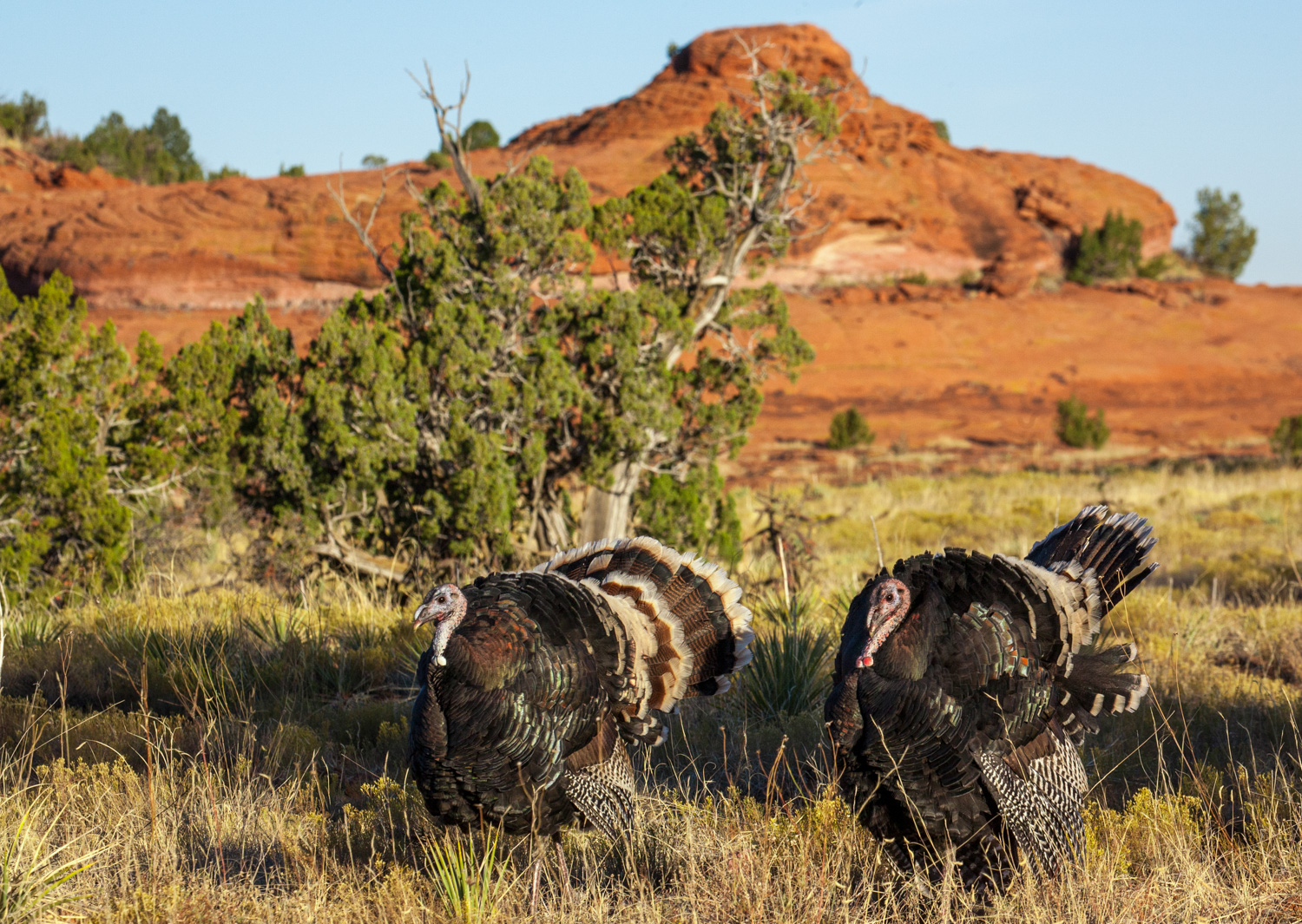 Wildlife habitat in the West spans from desert to high mountain tundra. The diversity of its vast countryside is what makes it a destination for hunters, travelers and wildlife watchers from all over the world. Merriam’s and Gould’s wild turkeys need healthy mountain habitats and healthy forests to thrive. Turkeys need big, mature trees for roosting, a healthy forest floor that allows them to move about and avoid predators and moist areas for raising broods. Healthy forests provide a diverse canopy and understory. They are also resilient to wildfire.

Catastrophic wildfires are more common today. In the past 60 years, 61 percent of the fires in the West have occurred since 2000. Additionally, those fires are longer, burning hotter, starting earlier, continuing longer and are more difficult to control.

These trends are alarming for both human communities and wildlife habitats. While wildfires in the West are a natural occurrence, Western forests are currently in a hazardous condition due to a variety of factors including fire suppression, drought, insect infestation and disease.

These fires have destroyed tens of millions of acres across the West in the last two decades, consuming both wildlife habitat and our communities. Wildfires also hinder NWTF’s Hunting Heritage mission. On an average year in northern California alone, wildfires prohibit hunters from accessing 13,705,260 acres of public hunting land.

The West’s forested watersheds store snow in the winter that provides water throughout the year.  Western water infrastructure on forested lands include dams, reservoirs, rivers, pipelines, electrical generation and more. Clean drinking water and water for agriculture is dependent on these critical watersheds.

Moreover, the waterways in the West are the ribbons of life for people and wildlife. Wildfires, drought, floodplain degradation and many other factors are negatively and dramatically impacting the quality and availability of water in the West and beyond. For instance, water from Colorado impacts five of NWTF’s Big Six regions, including America’s Western Wildlands, America’s Great Open Spaces, America’s Crossroads, America’s Mid-South Rebirth and America’s Southern Piney Woods, affecting Merriam’s, Rio Grande, Eastern and Gould’s wild turkey subspecies. The West, its communities, its water, its wildlife and habitat are crucially important to the NWTF.

Luckily, all of the work the NWTF funds and implements to benefit wild turkeys significantly combats these catastrophic wildfires and degradation, making communities safer, forests fire-tolerant, water cleaner and overall wildlife habitat more viable for turkeys and so many other wildlife species. The NWTF is addressing major concerns through both regional projects and landscape-scale initiatives.

Regional projects include the work NWTF state chapters fund through the NWTF Super Fund. Super Fund dollars are raised by NWTF local chapters in a state and go towards benefitting projects in their respective state. Projects like this include an array of benefits, from creating wildlife openings on WMAs or creating early successional habitat in national forests by timber harvests. When this regional work is combined with an adjacent state or state in the same Big Six Region, it amplifies the work the NWTF is doing from a national level through its landscape-level initiatives.

The NWTF is collaborating with an array of partners on a variety of projects that will ensure the wild places in NWTF’s Western Wildlands stay wild and continue to provide great habitat, on both a regional and landscape scale. Some recent projects include:

NWTF has created a handful of landscape-level initiatives across the country that incorporate many traditional and nontraditional partners, agencies and interested parties. These groups combine resources, funding and expertise that ultimately benefits the wildlife, forests, private lands and wetlands on an entire landscape.

Additionally, the NWTF is working with the USDA Forest Service and other partners on large, landscape-level forest stewardship work. Currently, the NWTF has stewardship projects in Arizona, California, Colorado, New Mexico, Oregon, and Utah. 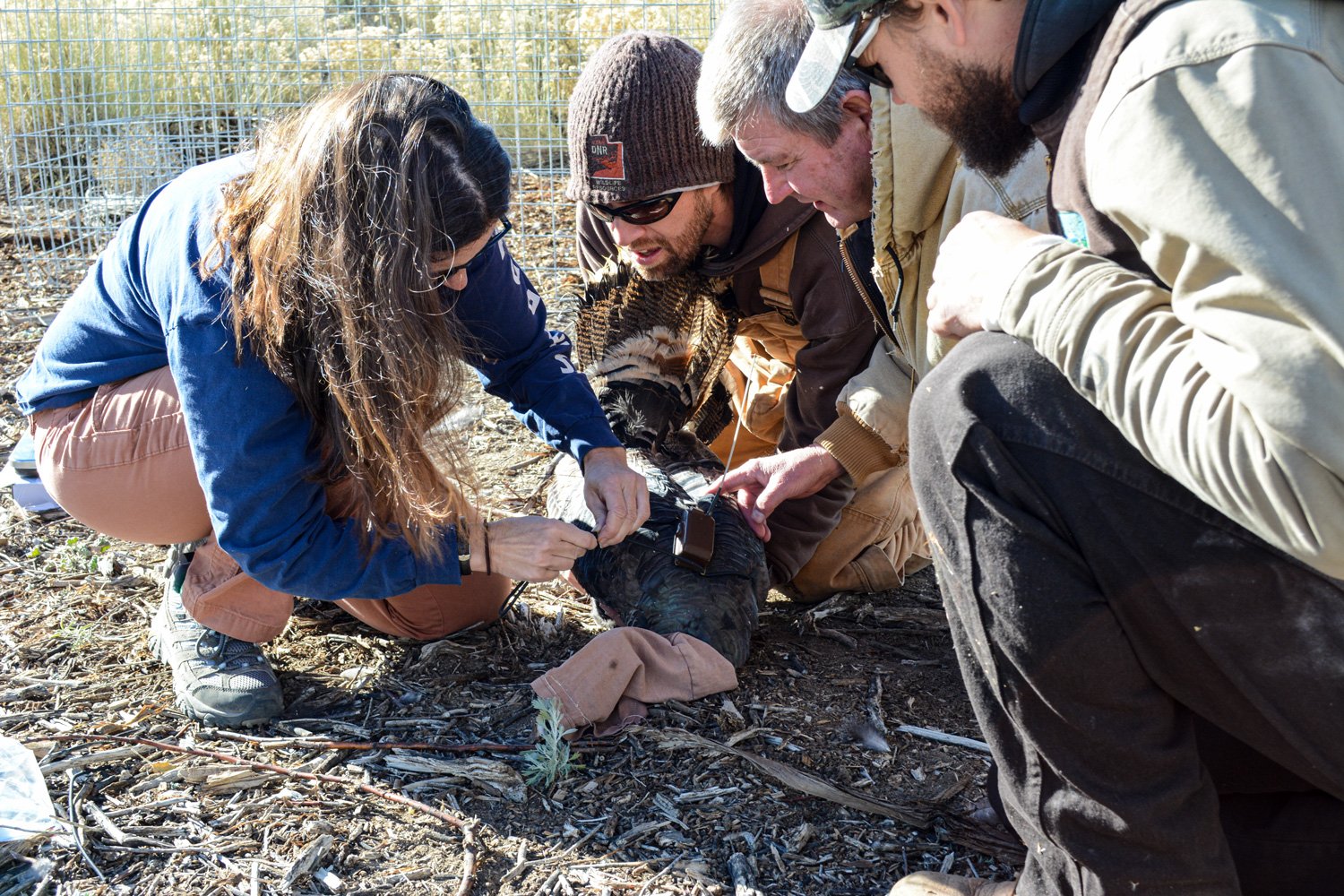 Wild turkey ecology research is the guiding star for much of the conservation work the NWTF implements, and it is also crucial in addressing population declines. In NWTF’s Western Wildlands:

The NWTF is helping fund research illustrating how riparian habitat restoration work affects wild turkeys. Research indicates that the thinning of  riparian habitat, or wildlife habitat near waterways, results in an increase in wild turkey usage and, anecdotally, an overall better nesting/brooding area. In addition to the work the NWTF does to restore riparian areas in Utah, the NWTF Utah State Chapter paid for all the technician monitoring and labor of this particular research project.

Policy is another major part of the NWTF’s mission that is housed under the conservation of the wild turkey and the preservation of our hunting heritage. In NWTF’s Western Wildlands, where there are misconstrued perceptions of forest and wildlife management and hunting, the NWTF has been at the forefront of passing scientifically sound legislation that benefits wildlife and sportsmen and women:

California  – The NWTF supported SB 370 (Sen. Bill Dodd, D-Calif.) that would authorize the Department of Fish and Wildlife  to make grants to, reimburse, or enter into contracts or other agreements with public and private entities, including nonprofit organizations, and federally recognized Indian tribes for the use of the funds from the Big Game Management Account to carry out their big game program.

Oregon – The NWTF renounced and is fighting against a proposed 2022 ballot initiative (IP 13) that criminalizes injuring/killing animals, including killing for food (slaughtering cows for meat), as well as hunting, fishing, trapping and most common livestock breeding practices.

NWTF volunteers are the lifeblood of the organization. During our Conservation Week, we want to thank all volunteers for their support and dedication to conserve the wild turkey and preserve our hunting heritage. Here are a few volunteers and chapters that have taken that commitment to extraordinary heights:

Joe Foster (Idaho) — Foster has been an NWTF member since 2011. He has been the Idaho State Chapter president since 2015 and is also the president of the Southeast Idaho Chapter. He became involved with the NWTF through a turkey release that his daughter’s class was involved with many years ago. Through that involvement with NWTF, he became a local chapter president, then a state chapter president and has been involved in the national level serving on committees and sharing his education and R3 templates. Foster has been involved with habitat, outreach and education projects and led one of the first efforts at NWTF to connect new hunters with food, creating the Wildavore program in 2014 in conjunction with Idaho Fish and Game. He also created a “turkey tune-up” program to connect nontraditional hunters with mentors and get them afield. He was instrumental in the creation of the Wild About Turkey Program, which trains certified teachers using wild turkey lessons using the NWTF education box.

The Mesilla Valley Longbeards Chapter Women in the Outdoors event, in Las Cruces, New Mexico. Women travel from across state borders to receive instruction ranging from archery and outdoor survival to game calling. The event also serves as a fundraiser for the NWTF, and, in one year, this chapter tripled the amount of money raised at this event, and the chapter received the national award for top contributing event in 2020.

NWTF Arizona State Chapter that sponsors and organizes turkey camps in Arizona, which hosts over hundreds of people.