Prepping a Kid for Shooting His or Her First Animal 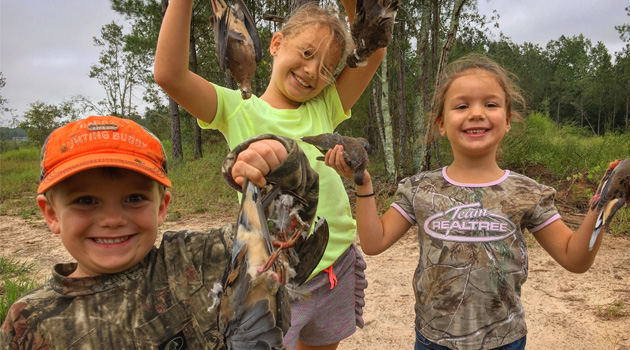 Harvesting an animal is second nature to many of us; we don’t think twice about it. We take a breath, exhale slowly, pull the trigger, clean the animal and pay respect by using as much meat as possible.

However, pulling the trigger on a game animal can be much different for, say, a youth about to harvest his or her first deer or turkey. Although a new hunter may be accurate at the range, once the gun sights are fixed on an animal a novice might be hesitant or she may be hesitant and jerk when pulling the trigger or may shy away from cleaning an animal because of all the blood.

Many of the parents and mentors I know start taking their kids hunting well before they are old enough to handle a firearm. While I wouldn’t recommend bringing a newborn into the deer stand, if a kid has developed decent enough motor skills to trek through some mud to the stand or blind, then he or she is old enough to accompany on the hunt. But, it is always good to ask them first instead of making them and be ready to pack it up when they’ve had enough .

Going out multiple times while they are young is not only going to teach them the general conventions of hunting –– don’t fidget in the blind, be quiet, go to the bathroom beforehand, dress appropriately, bring a snack, etc. –– but it is also going to allow them to indirectly witness what it is like to shoot and harvest an animal. Repetitions in this setting are great for when it’s their time to shoot.

Some people bring their kid(s) up in a hunting household; that is, from their earliest ages, the kids have witnessed an animal being cleaned or are aware that they are eating deer that dad or mom harvested. Many kids that are brought up this way are typically implicitly aware of what harvesting an animal entails; this can be very different for a kid that was not brought up in a hunting household, though.

If your kid is having difficulty reconciling with harvesting an animal, let them know that is how food is obtained and that the animal lived a happy, natural life. Travis Summer, NWTF Hunting Heritage Center and habitat manager, also suggests helping young hunters understand the role that hunters play in conservation.

“Let them know their role as a hunter helps control population numbers and provides balance,” Sumner said. “Inform them that overpopulation results in diseased animals and the destruction of habitat.”

If the child you are explaining this to is very young, they might not understand concepts such as “overpopulation” or “disease;” you can say something like, “If we don’t shoot some of them, then there will be too many and not enough food for all of them.”

Some kids are gentle souls, so keep that in mind.

Before you let your kid pull the trigger that first time, there should be 100%certainty they know how to handle a firearm safely. Recognizing a kid’s maturity is highly important because, if we are being honest, some 12 year olds act like 7 year olds and vice versa. Once you are sure of your kid’s maturity and ability to operate a firearm, give them ample time on a range to hone their shot. You want to try to prevent them from missing or, worse, injuring an animal on their first hunt.

Another tip to consider is allow them to work their way up on the size of animal, especially if they will be the ones cleaning it. For instance, start a new hunter off with a dove hunt. Cleaning a dove is less messy and less intimidating than cleaning a deer. After introducing them to dove hunting, allow them to decide if they want to harvest a bigger animal or if they want to try duck or turkey first. Letting them decide is crucial. Some kids, however, are ready to clean a deer after watching dad or mom do it.

There is no instruction manual for preparing a young hunter for that first shot on a game animal. The biggest take away should be that kids will react differently based on the environment they grew up in or just their general disposition, and it is important, as a parent or a mentor, to recognize if they are ready to shoot an animal.