There is a long history of prescribed fire in the South and opinions of the management tool are as varied as the different ecosystems that span this large region. Documentation shows that fires burned as often as once a year or more in southern pine forest and as infrequently as every 50 years or more in the mountains.

Historically lightning served as a major fire source in most ecosystems for millennia before Native Americans arrived some 10,000 to 12,000 years ago. We know that Native Americans were the first people of North America to use what we now call “prescribed burning.” We later learned that European settlers, whose livelihood often depended on hunting and herding, quickly learned the advantages of prescribed fire to create abundant forage and browse. By the late 19th century, the logging industry had become established throughout the South and excessive logging, followed by wildfires fueled by logging debris, left millions of acres of forestland with no trees.

Fire needed to be suppressed on a grand scale to allow forests to regenerate; even prescribed fire was banned by numerous land management agencies. Despite suppression efforts, fire was never completely removed from the landscape, but it was used sparingly for several decades until early reports showed the advantages of prescribed fire for bobwhite quail habitat and for managing southern pine forests. By the 1950s and 1960s, prescribed burning programs began across the Coastal Plain and lower Piedmont pine and grassland habitats, but prescribed burning in the mountains did not start until the 1980s.

As many land managers know, southern forests and grasslands are well adapted to fire. Many species survive or regenerate by tolerating fire, while some actually require it. Adaptations such as thick bark, light or winged seeds, or buried buds or meristems are common. Frequently burned landscapes, such as Coastal Plain longleaf pine, often have fewer trees in the over-story but have a diverse understory of fire-adapted plants. Land managers have also applied prescribed burning techniques to many other ecosystems across the South to create or maintain healthy habitat. It is also common to utilize prescribed burning across the mixed forests and grasslands of the Piedmont or the hardwoods of the Appalachian Mountains.

In 2011, an estimated 6.4 million acres were treated by prescribed fire across the 13 Southern states, further demonstrating that prescribed burning is a desirable and economically sound practice in many forests and grasslands. Few, if any, land management practices compete with prescribed fire for its combination of economy, effectiveness and scale. For instance, chemical and mechanical treatments are more expensive than prescribed burning, which limits their applications.

Up until the 1980s and 1990s, prescribed burning was most common in Coastal Plain and lower Piedmont forests. Several generations of resource managers gained experience and knowledge with prescribed burning in those regions, and much of our current knowledge originated there. Only recently have management objectives become broader. Land managers and researchers now have a new appreciation for using prescribed fire in grasslands, in hardwood forests and on steep mountain slopes, but burning in these areas presents new challenges and complexities.

For instance, most forests and grasslands require multiple prescribed fires over a number of years to reach land management objectives, but even a single fire can provide multiple benefits. The application of one prescribed fire can reduce wildfire hazard by reducing fuels, improve habitat for some wildlife species, reduce vegetative competition, enhance aesthetics and improve access.

However, if conducted in poor conditions, prescribed fire can severely damage the resources it is intended to benefit and can temporarily reduce air quality. Each prescribed fire presents a number of tradeoffs that must be recognized and carefully weighed to reach a decision regarding if and when to burn. 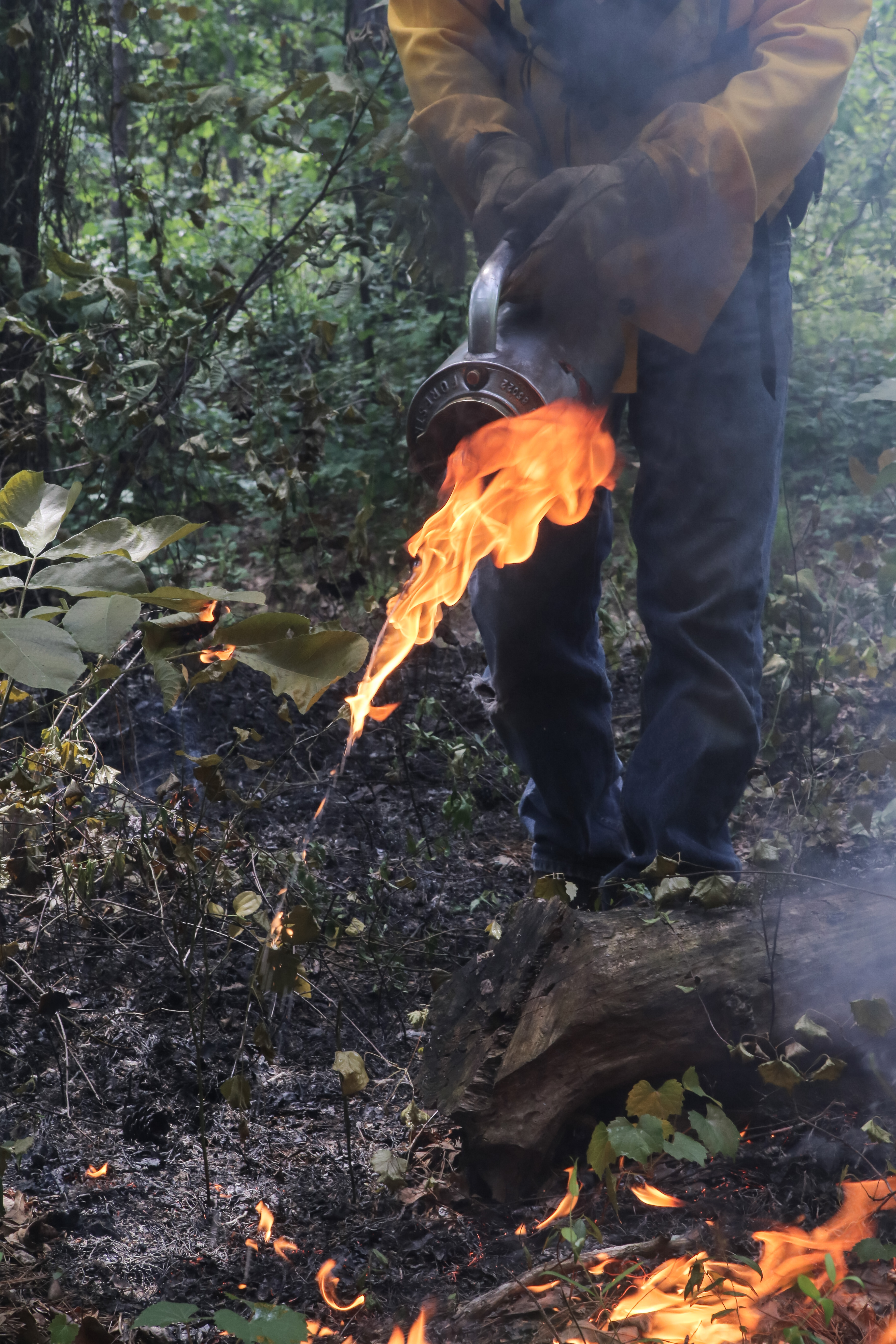 Proper planning and execution are always necessary to minimize any detrimental effects and to maximize effectiveness. Always weigh off-site impacts, such as air quality, and on-site impacts to soil, aesthetics and wildlife.

Land managers should work with their neighbors through open communication, and consider their concerns when defining burn objectives. Prescribed fire is a complex tool and should only be used by those trained in its use. Its most common uses are to:

Prepare sites for seeding or planting

The proper application and use of prescribed fire also requires knowledge of how fire affects vegetation, wildlife, soil, water, air and an understanding of how different burning techniques and timing of burns can be varied to alter fire effects.

For example, prescribed fire effects on plants varies depending upon fire behavior, fire duration, season of burning, the pattern of fuel consumption and the amount heat influences the degree of injury, mortality and recovery of plants from fire. Post prescribed fire responses can vary by plant species because they differ in their ability to survive fire and their ability to regenerate after a fire occurs.  Consequently, the above factors that directly affect the vegetative communities will also directly affect wildlife in different ways.

Many major effects of prescribed burning on wildlife are considered indirect. However, a change in the structure and composition of vegetation influences availability of food and cover, which will directly influence the health, abundance and diversity of wildlife. While direct mortality events of wildlife from prescribed burning is rare, it does occur, although long-term benefits outweigh any short-term losses. To account for any potential negative effects on wildlife populations, numerous research projects work to answer both the spatial and temporal impacts on wildlife populations, while providing insight on how to apply different schedules and scales to increase wildlife responses. It is understood that the season and frequency of burning and the size of the area burned is crucial to the successful use of fire to improve wildlife habitat and adequately change the vegetative structure and composition.