Much of the conservation work the NWTF does, whether directly or indirectly, greatly benefits the overall structure and biodiversity of riparian areas. A recent research project the NWTF helped fund, conducted by Dr. Nicole Frey of Utah State University, substantiated that wild turkeys continue to use riparian areas after removal of invasive species; in fact, wild turkeys use it more after it has been managed.

The terms riparian areas, riparian zones or riparian corridors are how wildlife biologists, managers and researchers refer to those habitat-rich areas between water and land. For instance, the area from the edge of a lake to the beginning of the surrounding forest would be considered a riparian zone. Another instance would be from the bank of a river to the bordering woodland. The interface between the woods and water provide crucial ecological significance for many species, wild turkeys in particular.

While riparian areas make up a relatively small percentage of overall habitat, the vast majority of wildlife species depend on these habitat oases in some form. Unfortunately, these important corridors are suffering from an influx of invasive species. Salt cedar, also known as Tamarisk, and Russian olives are choking out trees like cottonwoods, which are indicators of healthy waterways.

In addition to providing great habitat for both land and aquatic species, riparian areas serve many other functions, including controlling erosion, filtering excess nutrients from surface runoff, preventing flooding, improving water quality, providing for community water supplies and recharging underground aquifers. Plain and simple, riparian habitats are essential for wild turkeys and an overall healthy ecosystem. This is why the NWTF takes delivering conservation on these critical areas seriously. However, it is important to understand, specifically, the relationship between management and wildlife. Frey’s research in southern Utah is a great example of this relationship.

From 2018 to 2020, Frey conducted her research along the Escalante River drainage and the adjacent lands in southern Utah, an area where the invasive Russian olive was removed along riparian areas.

The invasive Russian olive trees were removed through forest thinning techniques from about 2010 to 2015, leaving behind the early successional habitat wild turkeys and so many other species thrive in.

“Locals were worried that by removing the Russian olives, a winter food source for turkeys,  it would make wild turkeys meander into nearby agricultural operations and cause damage,” said Chuck Carpenter, NWTF district biologist for Arizona, Colorado, New Mexico and Utah.

Frey and her team caught wild turkeys each year for the duration of the project and attached telemetry backpacks to track their movements and habitat usage. 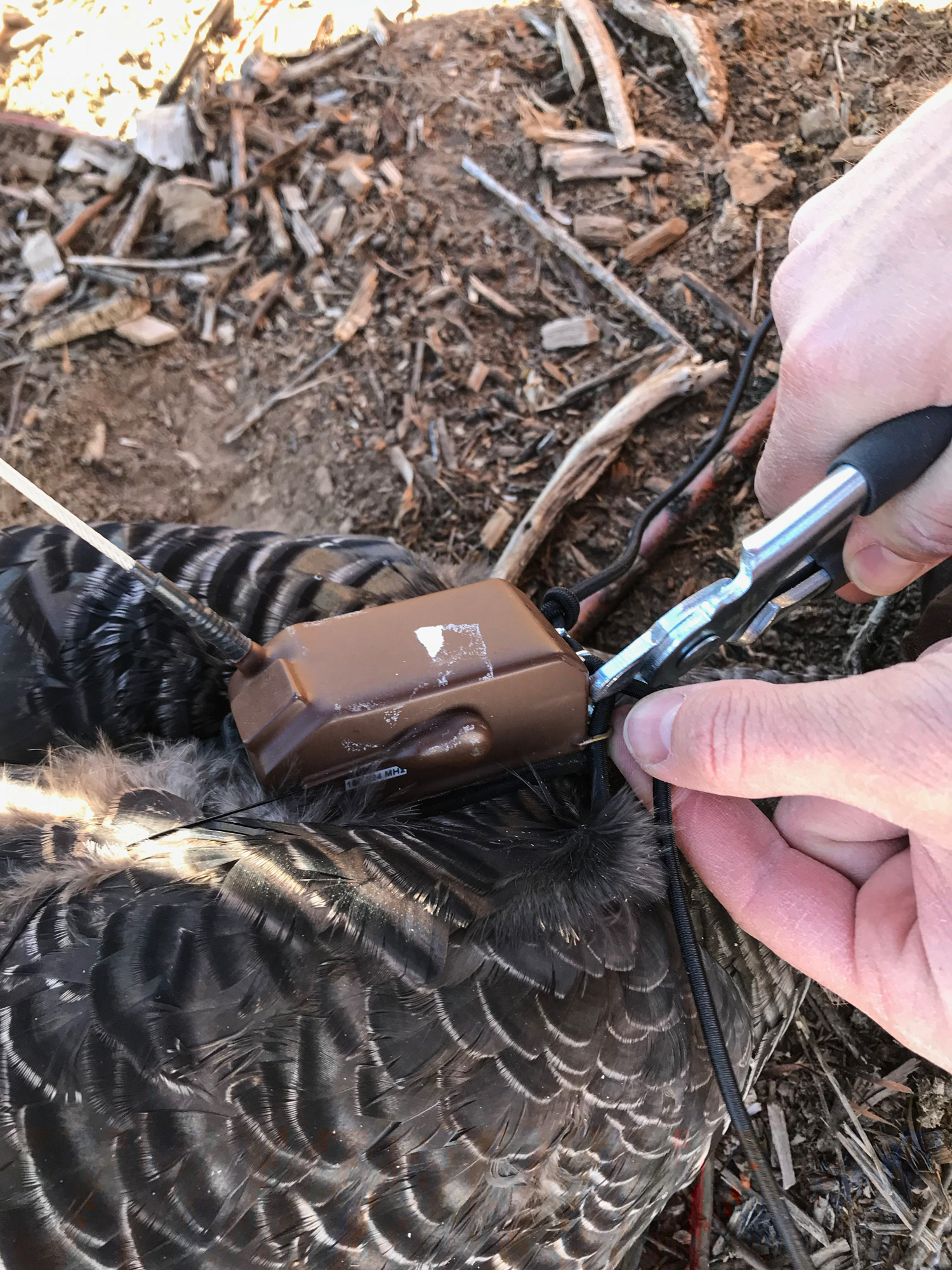 The NWTF Utah State Chapter paid for all the technician monitoring labor. This allowed Frey to see if wild turkeys were indeed going into nearby agricultural operations or if they were still using the riparian areas, even with the recent management.

“The research illustrated that turkeys used the managed riparian areas even more,” Carpenter said. “In fact, turkeys were spending more time in the managed areas during brood-rearing season. This indicates that the managed areas resulted in habitat with better shelter and better foraging opportunities.”

“Riparian areas provide important habitat, travel corridors, and roost locations for wild turkeys. Although riparian areas make up a small percentage of the landscape, they provide a disproportionate benefit to wildlife and have become a conservation focus of the NWTF”.

There are many conservation needs throughout the country. Whether it’s thinning overly dense forests, eliminating invasive species or using prescribed fire to create early successional habitat, utilizing research such as Frey’s is crucial for wildlife managers and biologists to better understand how to best implement management that will have the greatest overall impact for wildlife. As conservation needs rise across the country, so too does the need for research, ensuring the best possible outcome for wildlife and the people that enjoy them.