While most NWTF conservation projects usually involve the enhancement and conservation of wildlife habitat, conservation also can mean putting a stop to poachers.

To safeguard sustainable hunting opportunities, a local Alabama NWTF chapter, the Brewton Beard Busters, is helping to bust poachers. The Beard Busters funded the purchase of a $2,000 robotic turkey decoy for the Alabama Department of Conservation and Natural Resources.

“A decoy is an effective tool to apprehend and deter wildlife law violators, and it helps form a positive view of hunting from hunters and non-hunters alike, discouraging illegal hunting activity,” said Kacie Bauman, NWTF district biologist for Alabama and Mississippi.

The decoy is primarily for use in Escambia County and other areas in southwest Alabama. Adam Johnson, ADCNR officer, is the holder of the robotic turkey.

The strutting tom is controlled via a remote control and can move its tail fan and swivel. Johnson uses the decoy out of season and tries to catch poachers before they actually shoot the decoy, as repairs are expensive. 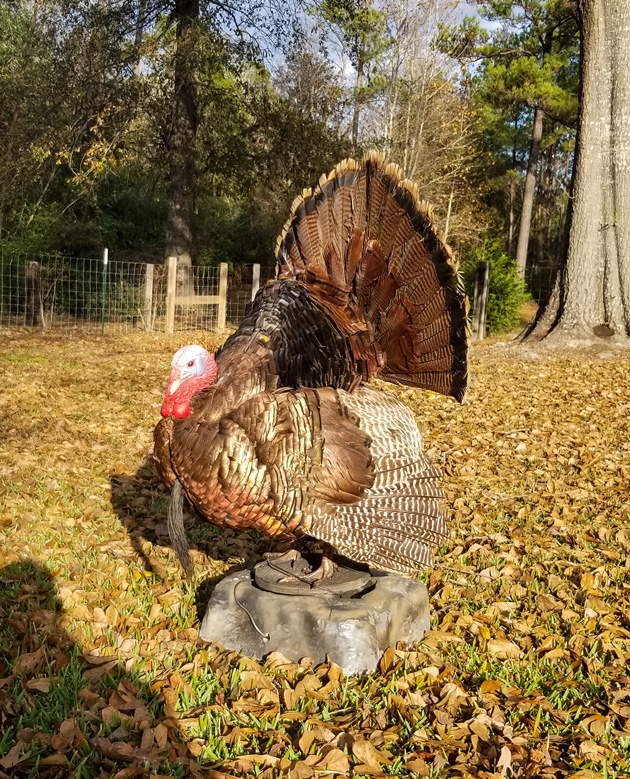 “The turkey decoy is not used to try to tempt those who are law-obeying hunters during season; it is used for those with a blatant disregard toward the laws that the ADCRN has set forth,” Johnson said.

While Johnson has yet to catch anyone attempting to shoot the decoy, Johnson caught an individual killing a turkey out of season and without a license while he was testing the robotic turkey.

“There were rumors of a guy shooting turkeys out of season in this certain area, so I set up the decoy hoping to catch him,” Johnson said. “While out with the decoy, I heard a gunshot in the distance and had a feeling it was this guy, and I knew where he lived. I tgot to his property before he did, and I waited at a distance to see if he took a turkey out of his vehicle. Sure enough, he had one.”

The individual that Johnson caught is facing thousands of dollars in fines and court fees and will not be hunting anytime soon.

Stressing he is more interested in those blatantly breaking the law and not law-abiding hunters, Johnson urges all hunters to make sure they are familiar with their state’s hunting rules and regulations.