The NWTF and the USDA Forest Service are mutually benefitting from an exchange of services that improved forest health and enhanced wildlife habitat in the national forests and grasslands in Texas.

As a result of the record-breaking droughts that plagued Texas in 2011, the NWTF and the Forest Service created the Drought Response Stewardship Proposal, where the NWTF agreed to buy, cut and sell timber in the Sam Houston National Forest, and in exchange, the NWTF would fund wildlife habitat improvement projects on the various national forests in Texas.

The drought caused many trees in the East Texas Pineywoods to die, leading to hazards along public recreation areas, trails and around homes and fences on bordering private lands.

“The ultimate goal was to improve the health of the forest and decrease potential for intense wildfires by reducing fuel loads and also removing the hazardous trees that died during the drought,” NWTF District Biologist Annie Farrell said. “The service work resulting from the exchange of goods for services were on some of Texas’s most important wildlife habitat areas.” 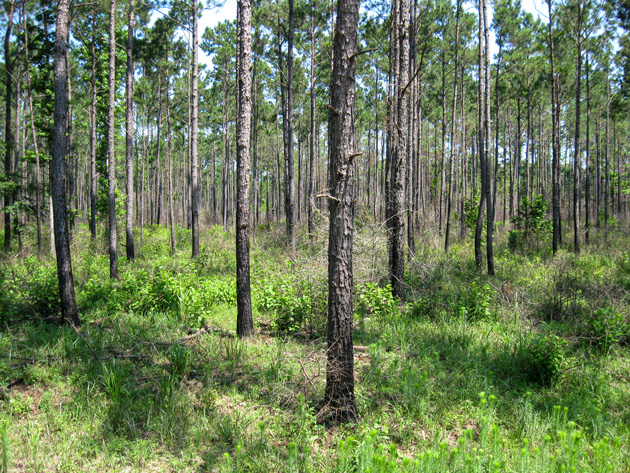 One of the first projects the NWTF helped fund was the construction of nine and a half miles of fire breaks on the Upland Island Wilderness Area in the Angelina National Forest, which facilitated prescribe fire on 13,000 acres. The project has expanded to include up to 54 miles of fire control lines and has continued every year since 2012.

In addition, the NWTF funded a mid-story mulching project of 238 acres on the Sam Houston National Forest to improve red-cockaded woodpecker habitat.

Due to many extenuating circumstances including Hurricane Harvey and unusually wet winters, not all projects in the original agreement were completed. However, habitat work has continued in 2020 with a new Supplemental Project Agreement on the Sam Houston National Forest for 268 more acres of timber thinning, resulting in 315 acres of mid-story mulching.

“While not all the intended projects were finished, through an agreement between the NWTF and USFS, what was an overly dense forest turned into a healthier forest, more suitable for wildlife and funded numerable habitat projects throughout Texas,” Farrell said. “When two organizations come together for the sake of wildlife and wildlife habitat and can leverage resources through stewardship, the results are outstanding.”