I focused the 400mm lens on a tall, thin cardboard box.

A white decal emblazoned with the words “Live Animal” stood out over National Wild Turkey Federation printed in red. 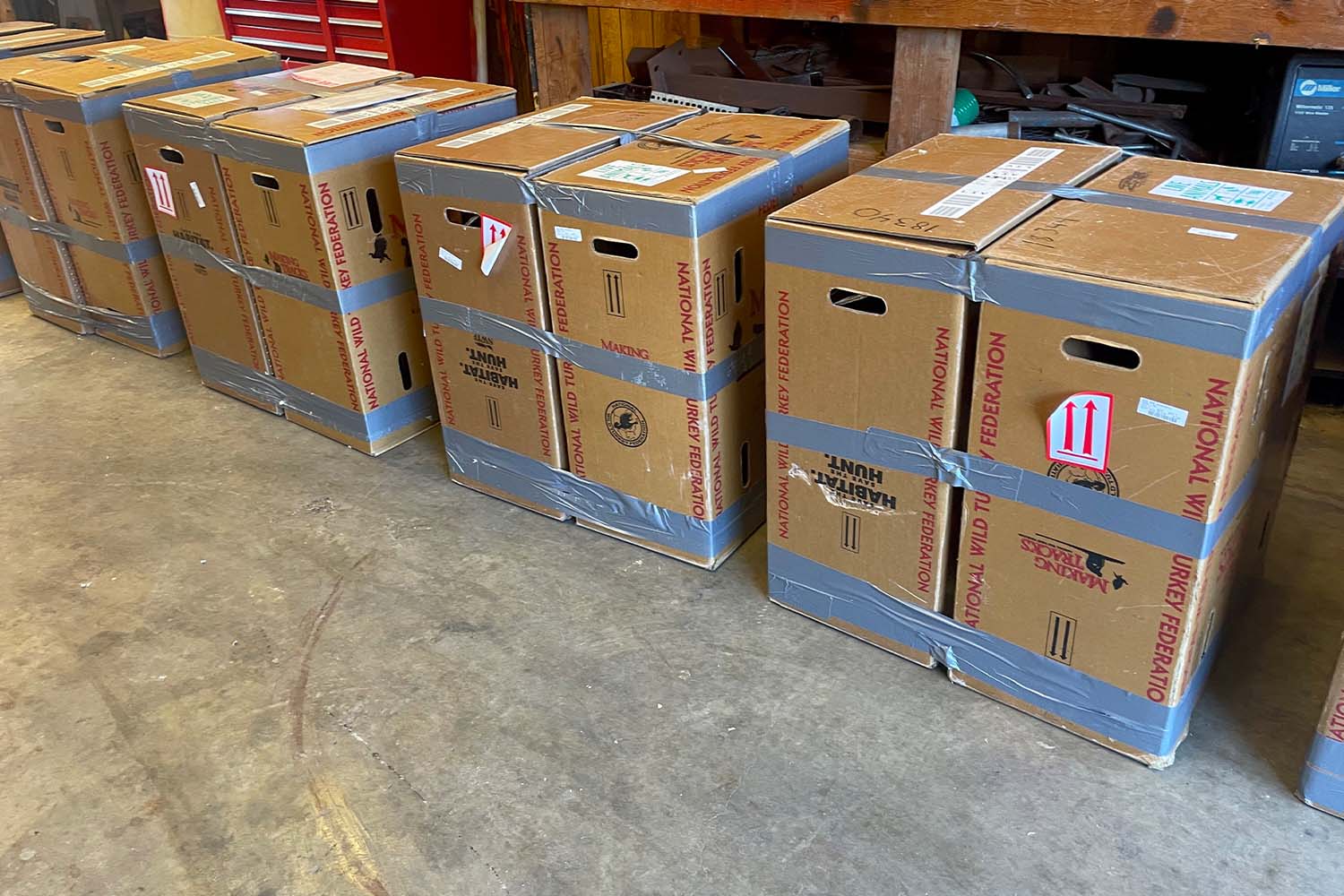 A few seconds later, Texas Parks & Wildlife Department biologist Sean Willis opened the box and out popped the head of a mature gobbler.

Just as I pushed the camera’s shutter-release button, the big bird took to the air and flew past with impressive speed. 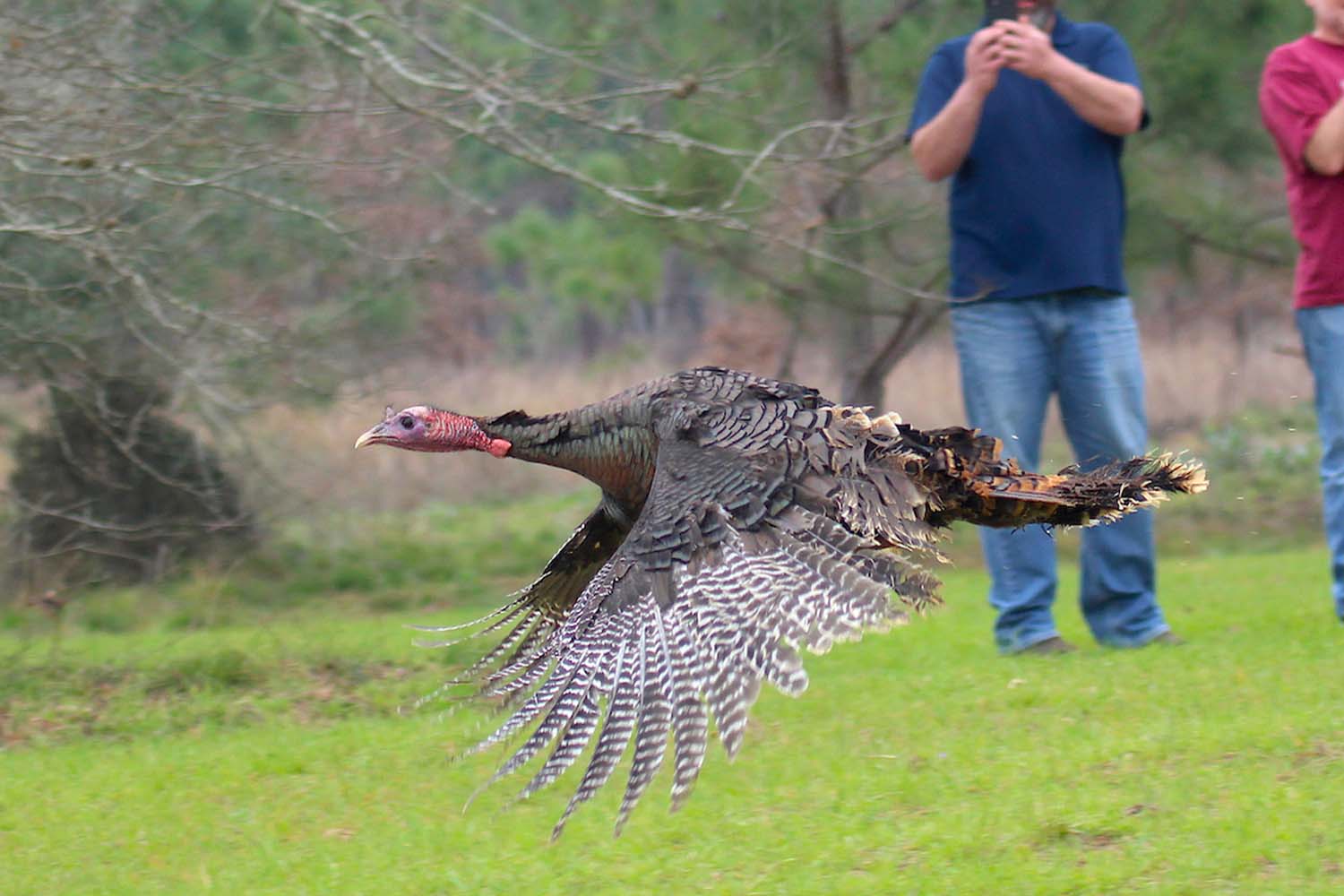 Over the next 60 seconds or so, Willis and a group of local kids opened  26 more boxes, all with Eastern wild turkeys captured three days earlier in Maine.

This was round two of a “super stocking” on the Middle Neches Eastern Turkey Cooperative in Angelina County. Super stockings involve releasing a minimum of 80 turkeys at each site over time with the ideal ratio of three hens for each gobbler.

In the past, TPWD released smaller numbers in areas, but over the last decade went to larger stockings and is seeing more success, according to TPWD Turkey Program Director Jason Hardin.

Eastern turkeys were once abundant across east Texas, but a combination of changes in habitat and poaching caused significant declines. The super stocking campaign is seeing success in re-establishing turkeys in critical areas.

“TPWD hopes to continue with the current program until we can daisy chain restocked and established populations across our Neches and Sulphur River Priority Areas to create a large range of connected populations capable of exchanging populations over time,” Hardin said.

“Of course, we are bringing birds in from out of state and relying on those non-resident birds to keep the program going. Getting birds from other states is always a challenge for our program and those partner trap states. If successful at filling our current priority areas and birds are showing positive growth, we would be interested in establishing other priority landscapes.”

A critical component is private landowners and stakeholders like the Middle Neches Eastern Turkey Cooperative working together to establish properly managed habitats.

“We began our journey for restocking Eastern turkeys back in 2015 when we first put in our application with TPWD,” said Todd “We ended up not passing our habitat evaluation that year and knew we had some work to do concerning improving our habitat.”

Over the next four years, the group worked hard on enhancing habitat.

“Specifically, we increased our usage of prescribed fire, herbicide applications and row thinnings and created more permanent openings throughout the entire landscape,” added Todd. “Then, once we re-applied in 2019, our efforts were rewarded when Jason Hardin let us know that we had passed.”

This stocking brings the number of birds released at the site to 48, which means other releases will happen as other states capture birds.

NWTF assists this program by facilitating bird transit from both a financial and logistical standpoint.

“The Texas State Chapter also assists with funding for disease testing and reimbursing TPWD staff who travel out of state to collect and haul the birds. NWTF also provides transport boxes to whichever states are trapping for Texas, free of cost.”

Turkey restoration efforts and closely monitoring native Eastern populations allow for hunting in 12 counties from Newton County to the south to Red River County along the Texas-Oklahoma border.

Shotgun and lawful archery equipment are the only legal means of take in the spring season with no hunting over bait. The bag limit is one gobbler.

All turkeys must be reported to TPWD within 24 hours of harvest via a mobile app or online. Harvested turkeys may be field-dressed but must otherwise remain intact until reaching a final destination.

Wild turkeys are much like the proverbial canary in the coal mine.

Miners used to carry little birds in cages, and when the birds got sick, they knew the air quality was poor.

Wild turkeys are an excellent gauge of healthy habitat not only for their kind but myriad other species.

When landowners and other stakeholders manage property for turkeys, other species thrive as well, ranging from whitetail deer to at-risk species like the red-cockaded woodpecker.

And while there will likely never be as many turkeys on the East Texas landscape as there were 150 years ago, seeing their return to specific areas brings hope that when people come together for the cause of wildlife, great things can still happen.