For the first 25 years of the NWTF’s existence, assisting state agencies with wild turkey restoration efforts was a priority for the organization and its volunteers. The Federation worked hand-in-hand with state agency partners to reestablish turkey populations in areas of suitable habitat, where few or no wild turkeys existed. The energy among the states, the NWTF and its volunteer base was palpable: People were getting their hands dirty for a good cause, and turkey populations were steadily growing.

When the NWTF was founded in 1973, there were 1.3 million wild turkeys in America. By the early 2000s, wild turkey populations were at their modern-era peak of about 7 million. The turkey trap-and-transfer program, Target 2000, was a huge success across the U.S. and hunting seasons were bountiful in gobbles and filled tags. 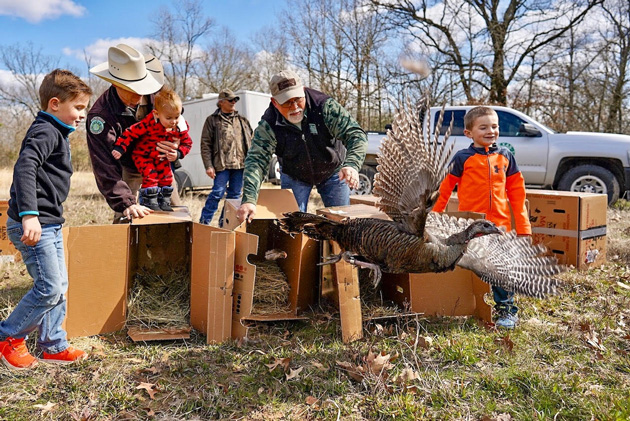 Another story was happening in east Texas, however. Early stocking programs from the late 1970s to early 2000s brought wild-caught Eastern wild turkeys from neighboring states and from even farther, but the original seeding formula of 15 to 20 birds (a few gobblers and mostly hens) didn’t take off as it did in many other parts of the country. There’s little understanding of why turkeys didn’t thrive and grow as their counterparts did in similar habitat. Some point to low poult survival following restocking efforts as one cause and heavy predation on nesting hens as another.

“Habitat also plays a factor,” said Annie Farrell, NWTF district biologist in Texas and Oklahoma. “The piney woods of east Texas is a pyric ecosystem, meaning it depends on fire, and the lack of it has led to habitat that is way too thick for turkeys to survive. Through active habitat management, the NWTF and Texas Parks and Wildlife Department are working together to combat this issue to give the translocated birds the greatest chance of success.”

In just the past decade, the NWTF and TPWD have accomplished more than $5 million in work on public and private lands, impacting at least 150,000 acres of habitat in Texas to benefit wild turkeys and other species. Habitat is always the most critical factor in the restoration and management of a species, explained Jason Hardin, TPWD’s wild turkey program leader. 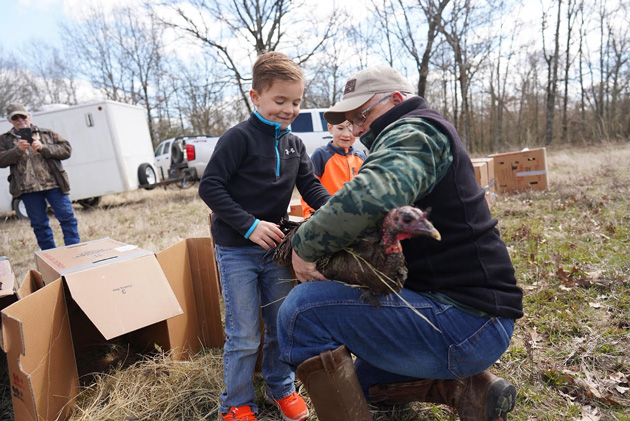 “Once habitat is suitable, controlling predators can also play a role when in restoration mode,” Hardin said. “Another issue, which is beyond our control, is that Texas marks the westernmost edge of the Eastern wild turkey’s historic range. This may have influenced the success of past restocking efforts.”

In recent years, however, a new approach is showing some promise. TWPD has embarked on a super stocking program, where its staff intensively restock birds in three designated focal areas in east Texas. The goal for 2020, for example, was to release 160 Eastern wild turkeys (80 per site) in two targeted release sites. These turkeys have mostly come from North Carolina, where USDA’s Animal and Plant Health Inspection Service personnel trapped them on airport properties where they posed a safety hazard, but some also have come from Missouri and West Virginia.

“Stocking in higher quantities provides a number of benefits to help encourage population sustainability and growth,” Farrell said. “First, this helps the restocked birds overcome typical mortality levels and poor nest success often seen the first year the birds are released. During block stocking, it was common to lose all the toms restocked before the breeding season ever began. The super stocking approach, however, assures that an ample number of birds survive going into years two and three.”

“The Eastern wild turkey once occupied up to 60 million acres in east Texas,” Hardin said. “Texas hunters, through their purchase of hunting licenses, are footing the bill for the restocking efforts. To date, the vast majority of funds tied to the restocking of this valuable bird have come from the purchase of TPWD’s $7 Upland Game Bird Stamp. Many of Texas’ citizens will ultimately benefit from the success of this restocking effort, but hunters will have once again paved the way.” 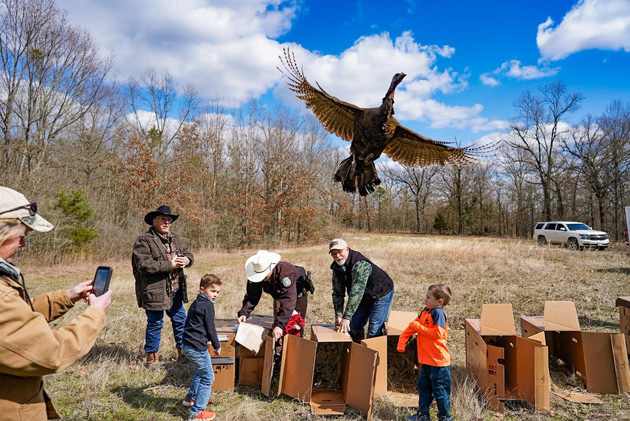 Sustainable populations resulting in the survival of adult wild turkeys, their nests and recruitment of poults into the population is critical if we are to one day open turkey hunting seasons in more areas across east Texas, Hardin explained.

“Wild turkey hunting currently provides close to $64 million annually to rural Texas communities,” he said. “Expanding hunting opportunities in east Texas will benefit hunters and landowners, and will, in turn, improve habitat for many game and nongame species that share the wild turkey’s range.”