Between the team and a log cabin, about a mile or so away, are green rolling farmlands surrounded by leafless hardwoods. This is quality turkey country.

Everyone decides on a game plan, and members from N.C. State University leave the meet-up spot and drive toward a dirt road to sit in a blind behind the cabin.

Similarly to hunting turkeys, the crew hunkers down in a blind waiting patiently for a flock of wild turkeys to make its grand entrance.

The rest of the group waits back at the rally point and talks turkeys and drinks coffee as the sun slowly rises.

“We’ll drive a little closer in a minute, so we can be ready if turkeys come in,” says David Moscicki, graduate research associate at N.C. State.

Chris Moorman, Ph.D., and professor of Wildlife Biology at N.C. State, receives a text from the crew in the blind.

“Turkeys are in the field,” Moorman says. “Let’s get the trucks ready and wait for the sound of the rocket net.”

Just minutes later, a distant and distinct BOOM gives rise to smiles and causes everyone to jump into their trucks, rushing to the trapping area behind the distant cabin.

The rocket net, which blankets the turkeys under a net about 50 feet long and 20 feet wide, captures seven hens. 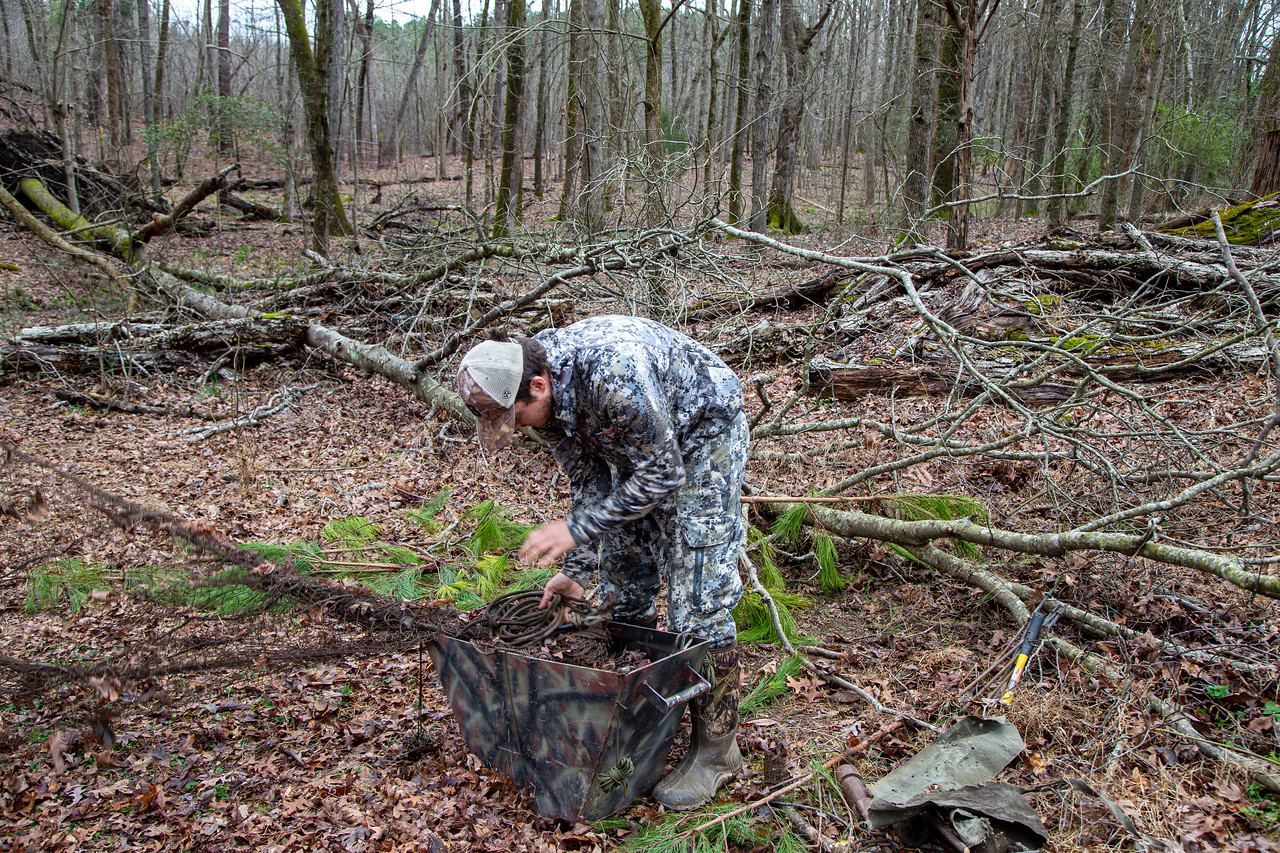 Everyone from NWTF volunteers to NCWRC biologists help gently untangle and place the turkeys in NWTF Making Tracks boxes. Moscicki’s field assistant brings a portable table along with various other testing equipment to the site where, one by one, the birds are removed from transport boxes, and their heads are covered with socks to keep them calm. 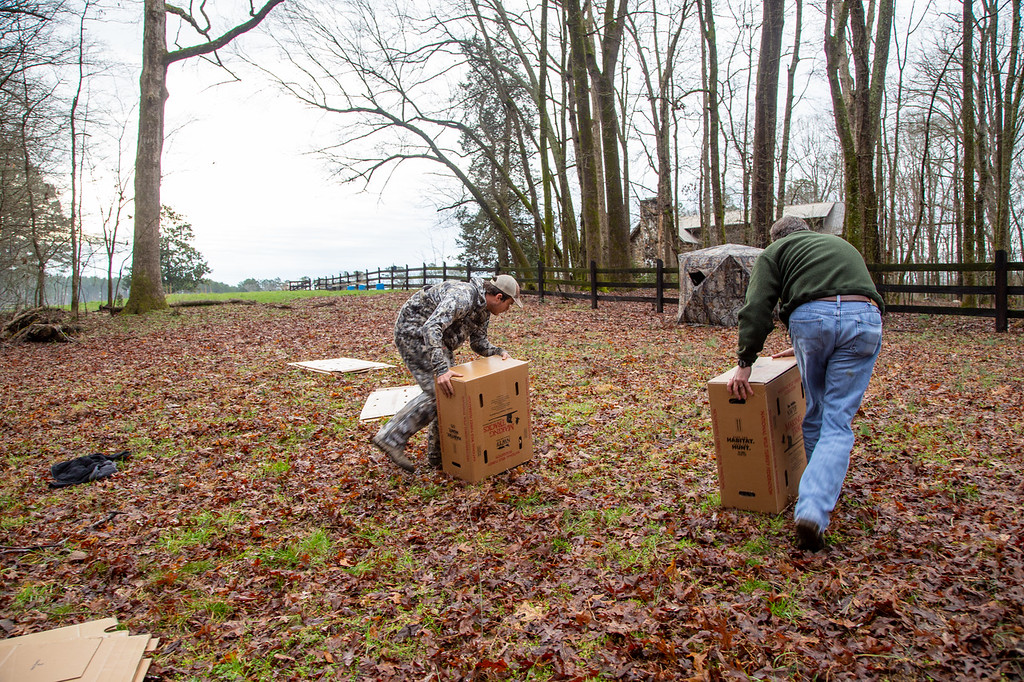 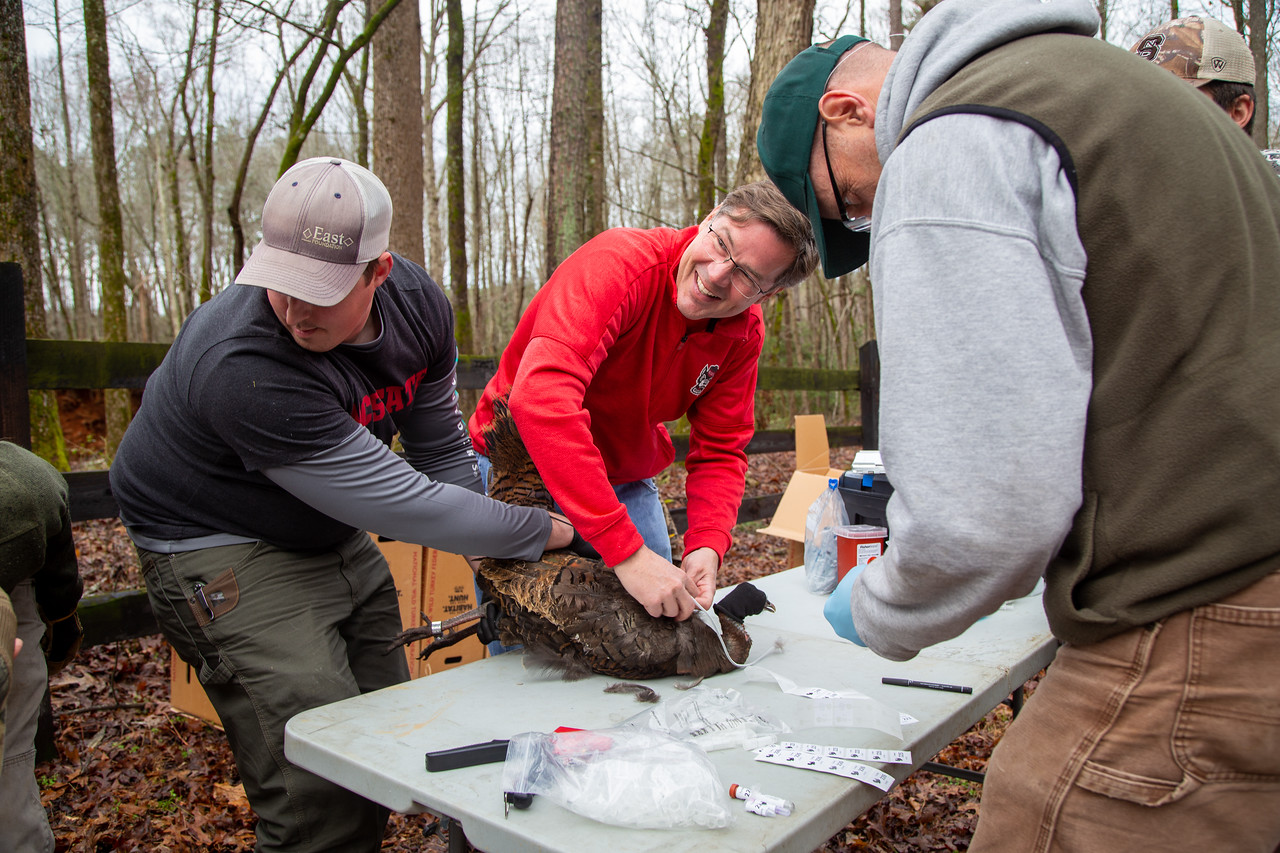 “We try to do all of this in the least invasive way possible,” Moscicki says.

Initially agitated, the turkeys become much calmer, allowing Moscicki and crew to begin their work.

The capture of these seven hens nearly completes the goal of 50 hens in the Piedmont. Moscicki and crew need to catch 30 gobblers here as well. In all, the study needs 80 birds in each of the three regions of North Carolina for the next three years.

With two people handling one turkey at a time, they start by attaching a uniquely numbered band to the turkey’s right leg.

“If the individual is harvested, found dead or recaptured in the future, the band provides data we can use to estimate survival and possible harvest pressure,” Moscicki says. “This is especially important for birds that we may not attach the VHF/GPS transmitters on; we still have the opportunity to collect certain kinds of data. Lastly, if the VHF/GPS tag attachment would fail, the bands provide a secondary way of identifying the individual if it is ever recaptured.”

Next the team attaches a backpack-style transmitter that has both GPS and VHF capabilities.

The VHF (very high frequency) sends out a unique, high-frequency radio signal that Moscicki and team can detect with a receiver, allowing them to find a general location of the turkey and determine if the turkey is alive or dead.

The GPS records locations at fixed times during daylight hours, which Moscicki and team remotely download every couple of weeks.

“Everything we do with the GPS/VHF transmitters is to collect ample data while saving battery life of the transmitter,” Moscicki says. “We have set schedules that the transmitters operate at to ensure that we get a minimum of two breeding seasons documented with a single transmitter while being able to remotely track these birds throughout the life of the unit.” 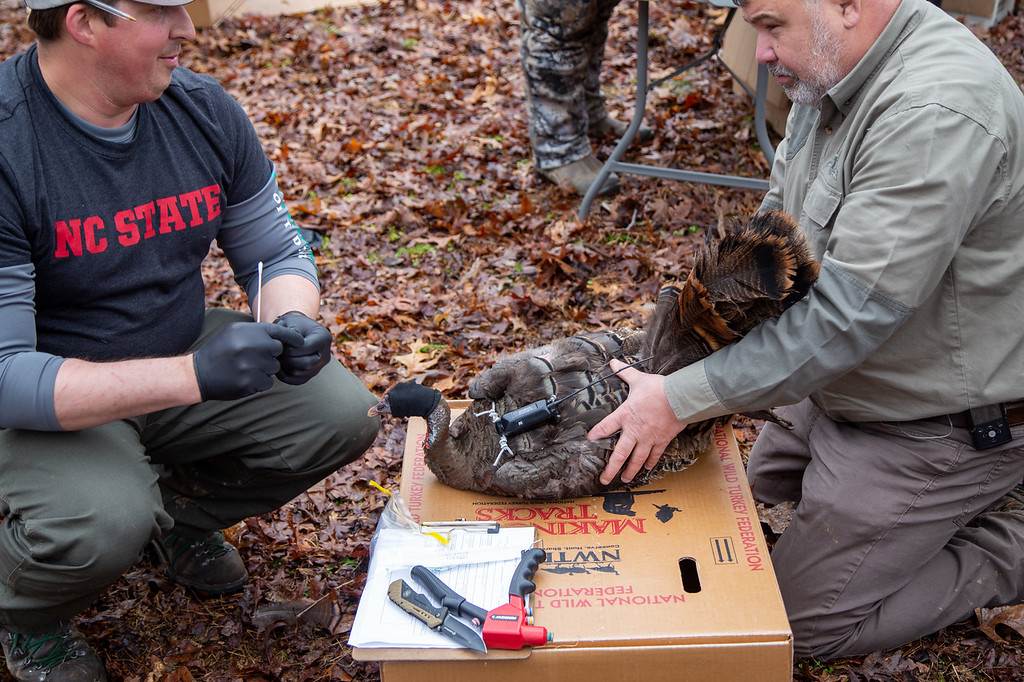 After VHF/GPS backpack transmitters are attached to the hens, the team takes saliva and fecal swabs and extracts blood from the turkeys.

Chris Kreh, NCWRC Upland Game Bird Biologist, assists with gathering these samples and explains the importance of collecting such data.

“Though turkeys have been studied for many years, there is still a lot we don’t know, especially about why turkey populations sometimes decline without any readily apparent changes in hunting or habitat, or why they thrive in some areas but not in other similar areas,” Kreh says. “In some of these situations, we suspect that diseases might be a factor. We also have questions about how diseases might pass from wild turkeys to domestic turkeys and vice versa. So, in our study, we are casting a pretty wide net in terms of diseases and health issues — collecting all possible types of samples that will allow us to test for a wide variety of diseases.” 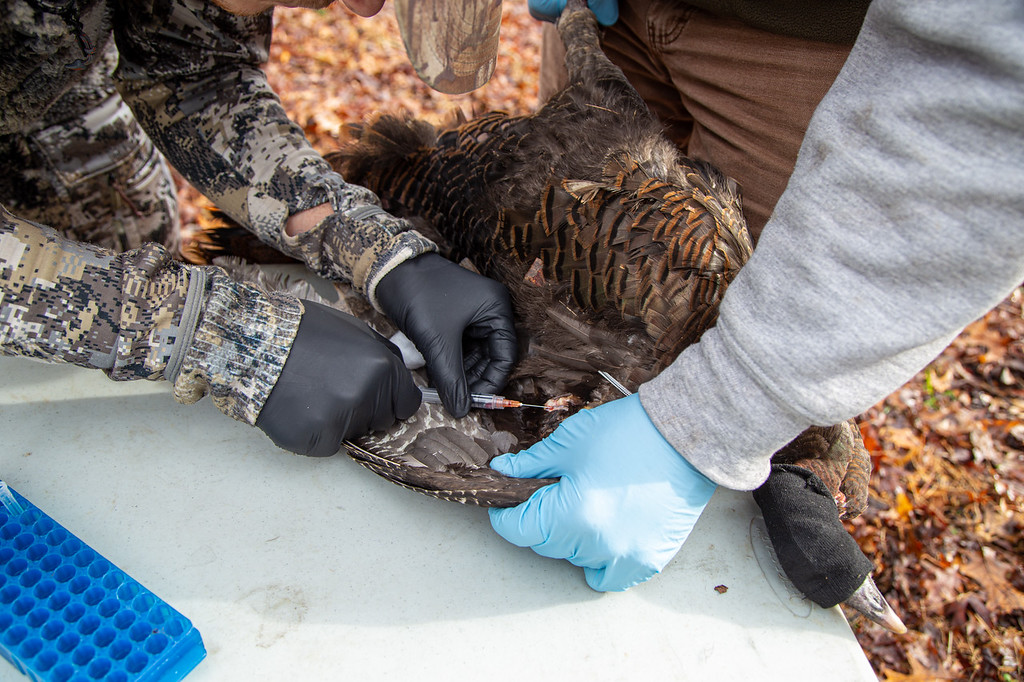 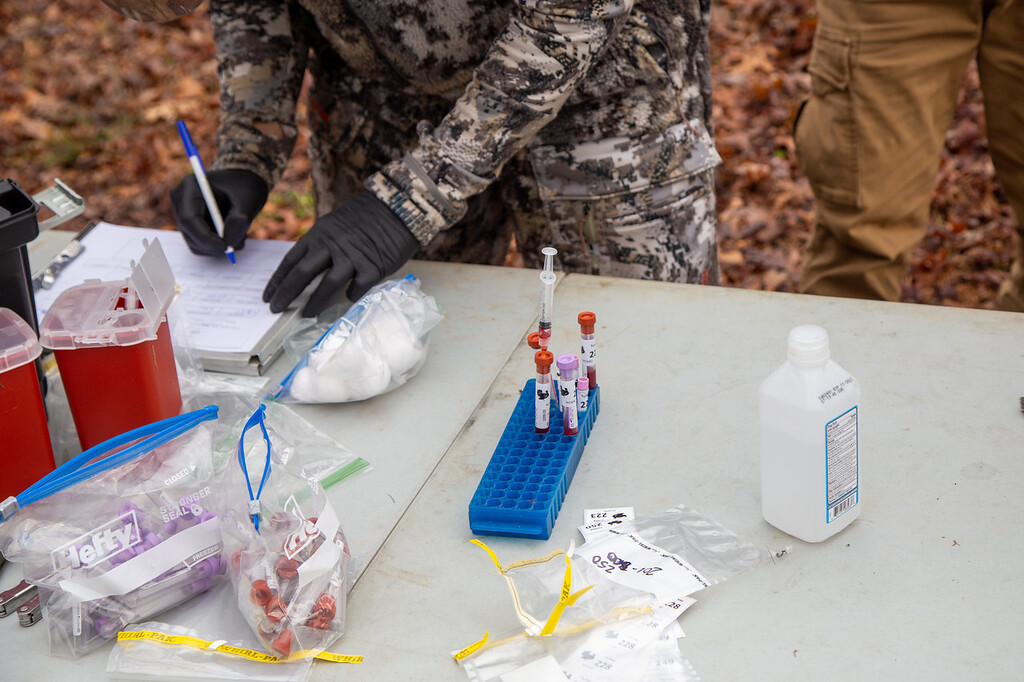 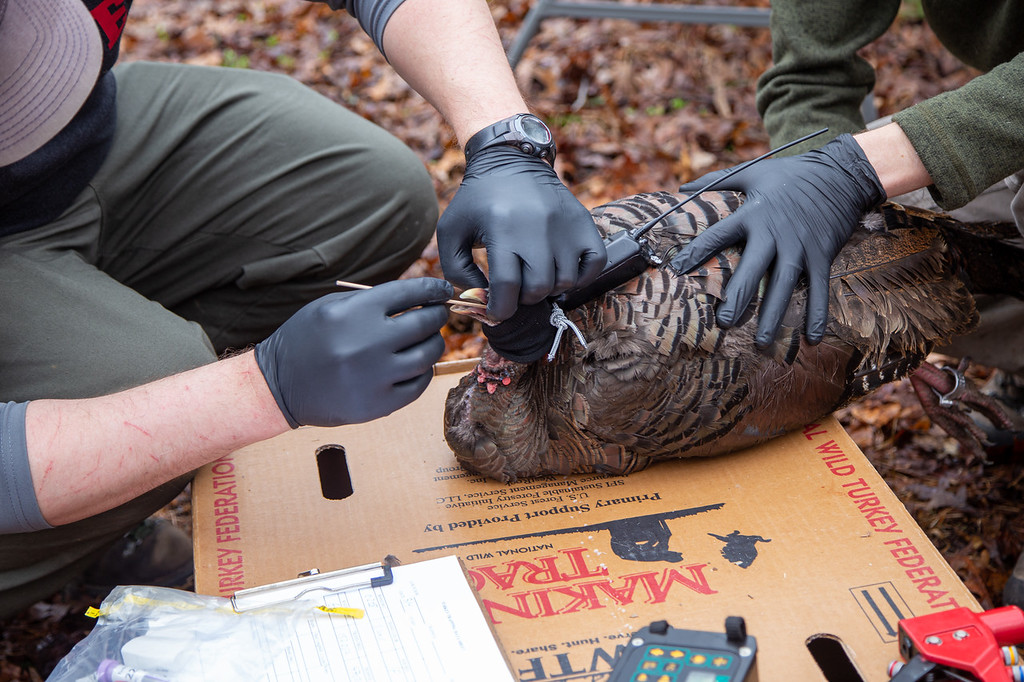 (“West Nile virus, Lymphoproliferative Disease Virus and Blackhead disease are of particular interest and could be affecting wild turkey populations,” explains Kreh. “We’ll be looking closely at how prevalent those diseases are and also seeing if birds infected with these diseases perhaps have lower survival or reproduction. Also, there are some diseases, such as Toxoplasmosis or Salmonella, that are also a concern for domestic poultry and human health. It’s critical, therefore, that we also have good understanding of how prevalent these diseases are in wild flocks”)

The blood samples and saliva and fecal swabs gathered from each turkey will be sent off to a lab for a comprehensive analysis.

Moscicki, Kreh and team work efficiently; after banding, attaching a transmitter, taking saliva and fecal swabs and extracting blood samples on a single turkey, not even 10 minutes passes by.

After completing tests, Kreh walks up the farm’s grassy hill, positions the turkey in the proper direction and removes the sock from the bird’s head. 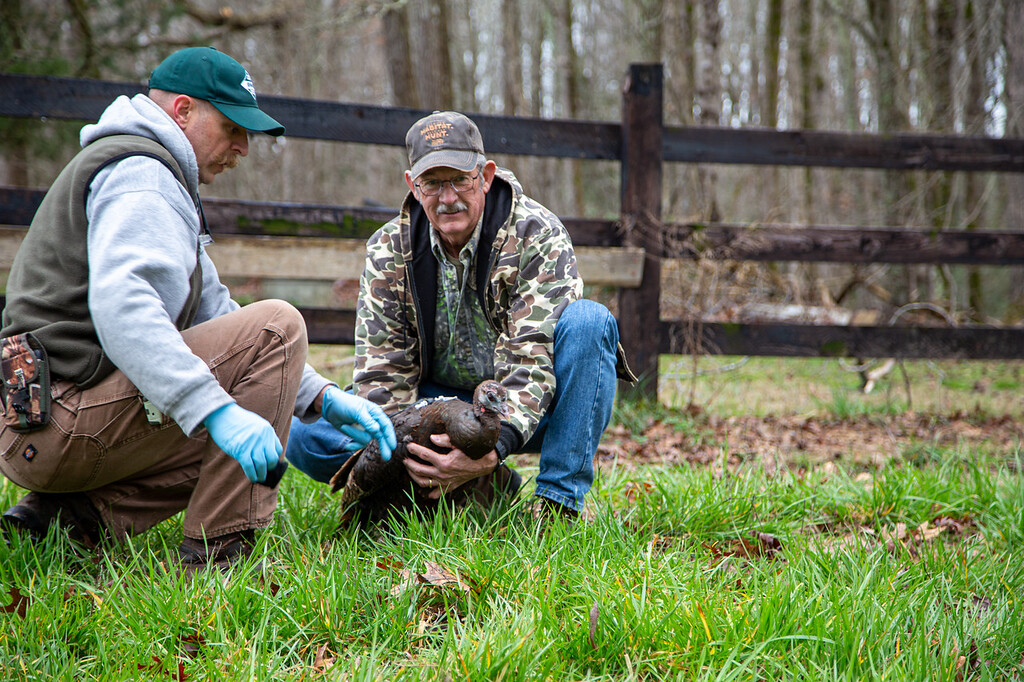 “OK, let her go!” he says to his teammates releasing the turkey.

The turkeys immediately take flight into the woods back to their daily routine and will now help N.C. State, the NCWRC and the NWTF better understand how to manage the wild turkeys in North Carolina.

In addition to understanding diseases that the wild turkeys may encounter, this three-year study aims to uncover a better understanding of when wild turkey nesting begins within each of North Carolina’s three regions. It will also determine the success of turkey nests in each region and the potential causes of nest failure; document the vegetation conditions where turkeys nest in each region, helping direct habitat management to increase nesting over time; and estimate survival rates of female and male turkeys in each region and determine the primary causes of mortality.

This project is being funded collaboratively by N. C. State University, the NWTF, NCWRC, and the Sport Fish and Wildlife Restoration Program.