The Guards of Conservation

Across the nation, military bases boast excellent public hunting opportunities and provide vital habitat for a variety of species.

In the Southeast, favorite whitetail destinations include Georgia’s Fort Gordon and Fort Benning. Both of these installations are key to the recovery of endangered red-cockaded woodpeckers and gopher tortoises. In Kentucky and Tennessee, Fort Campbell is known for its great deer and turkey hunting, while also monitoring and managing for endangered gray and Indiana bats.

In Michigan, the NWTF, Department of Natural Resources and the Army National Guard have teamed up on Camp Grayling to improve wildlife habitat and hunting opportunities and to reduce the risk of wildfire, saving an imperiled ecosystem in the Great Lakes region and the wildlife that depend on it. 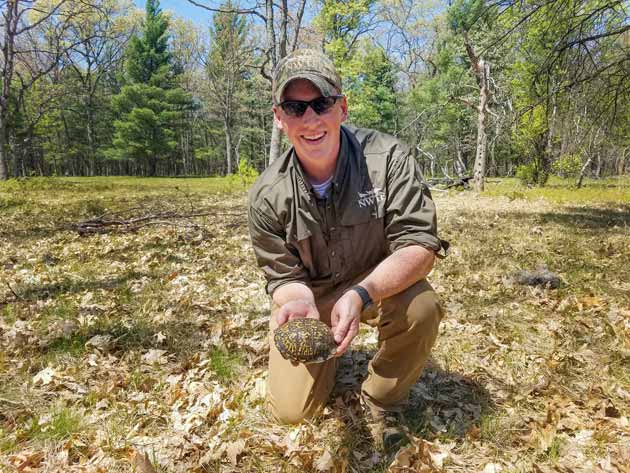 Dry northern forests and pine barrens ecosystems are some of the rarest ecosystem types still found in the Great Lakes region. They are dependent on fire and other disturbances to maintain openings that support the plants and wildlife that make up these unique natural areas. Increases in human development, wildfire suppression and landscape fragmentation caused a decline in the abundance and quality of these habitats. And many of the openings once found within Michigan’s northern forests are disappearing due to lack of management and an influx of invasive plants that outcompete native species.

The Michigan Army National Guard owns more than 147,000 acres as part of Camp Grayling in northern Michigan with the primary objective of meeting the training needs of the U.S. military. It is the largest forward training center east of the Mississippi for the National Guard and trains thousands of service members each year.

Within the installation’s boundaries, dozens of openings make up artillery and mortar firing points that are used periodically throughout the year as part of this training. Other times of the year, however, with the help of the NWTF and Michigan DNR, these openings and other parts of the installation are managed for wildlife and open for public recreational use and hunting.

“A major focus for the National Guard is to manage these openings to prevent accidental wildfire as a result of the training exercises,” NWTF District Biologist Ryan Boyer said. “Before we became involved, that involved mowing the existing ground cover on a regular basis.”

Through a grant awarded by the DNR, the NWTF helped create a management plan that addressed both wildfire and wildlife concerns and included converting existing openings into wildlife-friendly food plots using low-growing, low-maintenance ground cover, such as clover, buckwheat and rye, and to plant soft-mast-producing shrubs and trees around them. This reduces maintenance expenses for the installation, reduces wildfire risk, benefits wildlife and increases opportunities for hunting.

Since 2016, the NWTF has helped impact more than 600 acres at Camp Grayling, plant over 250 trees and shrubs and provide opportunities for veteran and new hunters alike.

“This partnership, as part of a greater conservation effort of the Dry Northern Forests and Pine Barrens Wildlife Action Plan, has greatly enhanced this rare forest habitat and wildlife openings in northern Michigan,” Boyer said. “Being able to address our country’s military installation goals and improve public hunting opportunities increased the satisfaction of the effort. In fact, we are working to host a mentored deer hunt for disabled veterans on the property in 2021, which will be a meaningful tribute to those service members and their sacrifices.”