The Hills are Alive

The Black Hills-Pine Ridge region encompasses a large geographical area that includes portions of southwest South Dakota, northeast Wyoming and northwest Nebraska. This region is characterized by a mix of rugged mountains, valleys and ravines cut by cold, clear streams flowing down to and around vast grasslands.

When most people think of the Black Hills, iconic places such as Mount Rushmore and the nearby Crazy Horse Memorial, come to mind. The region’s visually enthralling terrain and abundant tourist attractions make it a popular travel destination for millions of people annually.

While most visitors may be inclined to focus on famous landmarks or stake bets in one of the region’s old frontier towns once frequented by Wild Bill Hickok, turkey hunters have something else in mind: the unmistakable, bleached-white tailfeather tips of a Merriam’s gobbler strutting through a meadow tucked in an expanse of towering ponderosa pine.

Many turkey hunters live outside of the Merriam’s unique range and must travel to hunt them. This often isn’t difficult, given the amount of public and huntable private land in the West. It is one reason why the Black Hills remain one of the nation’s most popular destinations for out-of-state turkey hunters. 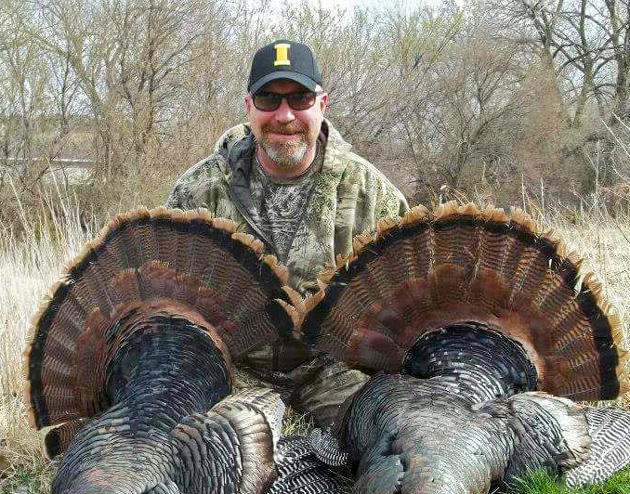 These areas are critical for Merriam’s wild turkeys and a priority for the NWTF. While a variety of terrain is found here, roughly 80% of Black Hills range is covered with more than a million acres of ponderosa pine stands. While these majestic pines play a starring role in unforgettable vistas, this heavy pine density can create challenges when it comes to wildlife habitat.

“For a host of reasons, a lot of the West’s forests have been neglected from a management standpoint for many years,” said Jim Pitman, NWTF district biologist for the region. “Some of it is just a change in perception on logging and some of it has been a lack of market for timber.

“Fire occurred naturally in this ecosystem; however, it has been suppressed for more than 100 years. You end up with a forest that is unnaturally dense, which can create a lot of problems. When it does burn, it can lead to catastrophic wildfires. Additionally, the forest becomes susceptible to insect infestations and disease. From a wildlife perspective, dense forests lack diversity and meadows are being lost to invading conifers resulting in a reduction of forage for critters, especially wild turkeys.”

Because of the regional habitat’s importance, the NWTF is actively working with partners on forest management and streamside restoration. This includes adding professional foresters in all three of the region’s states to work directly with agencies and private landowners to address the health of forests, and riparian zones, which include riverbanks and the areas around them. 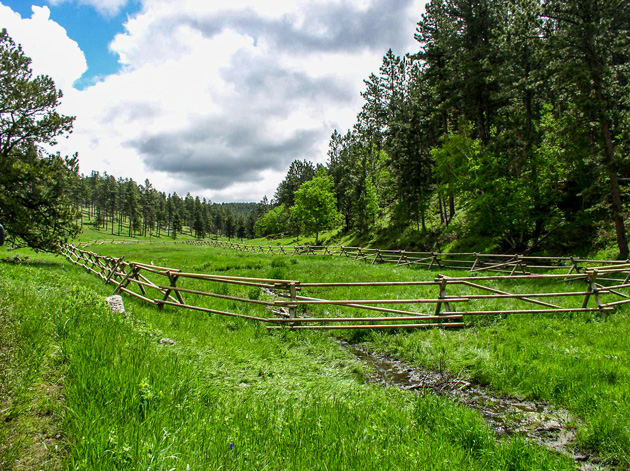 “It’s pretty barren underneath those dense stands of pines,” Pitman said. “So, we’re trying to get in there as much as we can to increase management by working with private landowners and federal and state agencies to get some of that work done where they are not able to do it themselves. This could be for a variety of reasons, including budgets and staffing, for example.”

In South Dakota, one NWTF position funded by several partners will work with the NRCS and South Dakota State Forestry. This forester will primarily assist private landowner management programs such as timber thinning and riverbank habitat work. The Nebraska forester, a position partially funded by Nebraska Game and Parks, will deal with public lands. The NWTF’s Wyoming cooperative forester also works with private landowners and forest management agencies to increase forest management on private lands in the Black Hills region of the state. 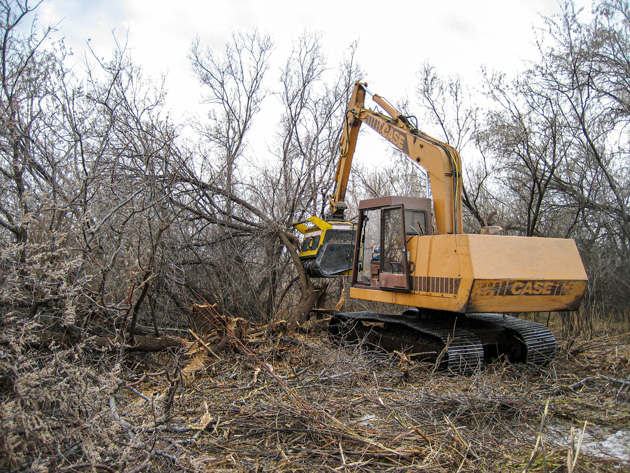 “Most of it is pre-commercial thinning — cutting before trees reach their marketable size,” Pitman said. “In a lot of cases, a commercial timber harvest is not possible due to distance from a mill or just simply the lack of marketable timber on the site.

“The regeneration of beneficial grasses, forbs and shrubs is really good in those areas in the absence of conifer shading.”

According to Pitman, cottonwoods are the primary roost tree along waterway drainages. When no natural regeneration occurs and the cottonwoods die, turkeys begin losing critical roosting habitat. With this in mind, the NWTF French Creek Initiative entails working with private landowners using conservation district and NRCS money to assist with restoration work along streamside corridors. This involves planting willows and cottonwoods in sections of riverbank habitat lacking in natural regeneration. Those plantings often use a water-jet stinger, a tool that uses high-pressure water to create a hole to place dormant stem cuttings. 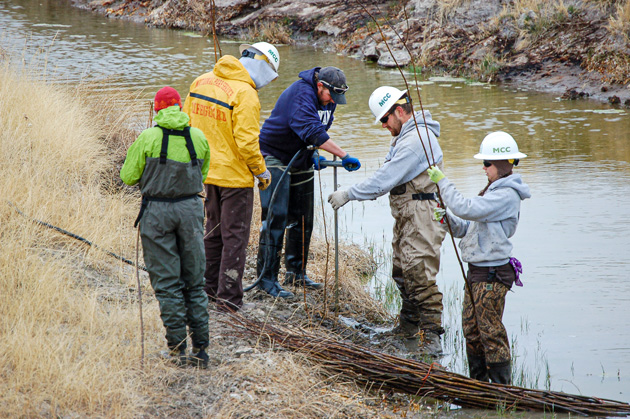 To further regeneration efforts in these areas, removal of encroaching conifers reduces competition as well as reduce fuel loads. Landowners sometimes use fencing in some areas to manage the entire waterside area by restricting cattle grazing during certain times. Fences also prevent cattle from damaging springheads, the sources for much of the water feeding the area.

“We’ll go up and find spring heads where these riparian areas emanate from,” Smith said. “Generally, these are springs that come out of the side of a hill or a wet meadow — that’s the start of a creek. During summertime, grazing cattle will spend a lot of time in those springheads. They’re wet and lush with growth, so cattle often loaf in and trample these areas.

“When cattle trample the clay soils, the damage can actually seal off the spring. We’ll use fencing to create an ‘exclosure’ to keep cattle out.”

Typically, buck and rail fencing is used in the case of springhead exclosures so deer and elk are able jump over the barrier to access water and grazing, while restricting cattle access.

Smith said streamside areas are generally the first to green up in the spring. 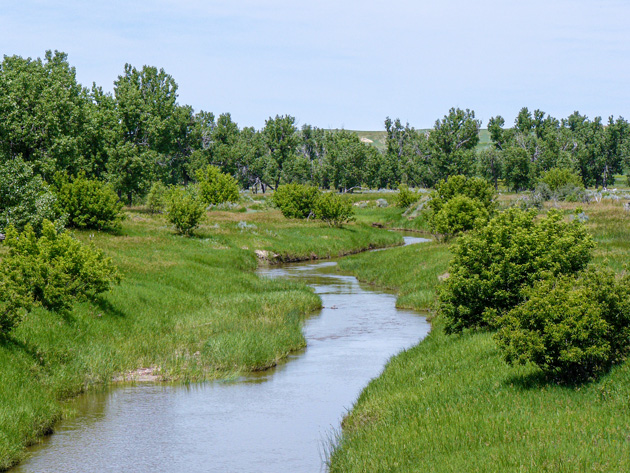 “Early in the spring, when there’s moisture, is the time to graze riparian areas,” he said. “Then you want to get the cattle out of there when the rest of the uplands start to green up. Removing cattle from riparian areas allows the areas to begin to recover through the rest of the summer and prevents browsing of trees and shrubs in the fall.”

“The NWTF will help design and create a riparian pasture so landowners can better manage riparian areas and allow cattle to graze at the proper time,” Smith added.

The NWTF’s on-the-ground work, in collaboration with its partners, throughout the Black Hills-Pine Ridge region benefits a host of wildlife species. The payoff for turkey aficionados, though, is knowing the lyrical gobble of the Merriam’s will resound across the hillsides for decades to come.