While 2020 was a tempestuous year to say the least, there are still many reasons to be thankful as we wrap up the holiday season. Not only have the last couple years been great for conservation legislation, but this recent Christmas marked the 50th anniversary of the USDA Forest Service providing the Capitol Christmas Tree for the west front lawn at the U.S. Capitol Building. The tree, commonly referred to by its moniker, the People’s Tree, is a bright tradition in our nation’s history.

For the last 50 years, the Forest Service has harvested the People’s Tree from national forests throughout our country, using it as an opportunity to bring Americans closer to their public lands, highlighting the goods and services national forests provide and advocating public recreation. 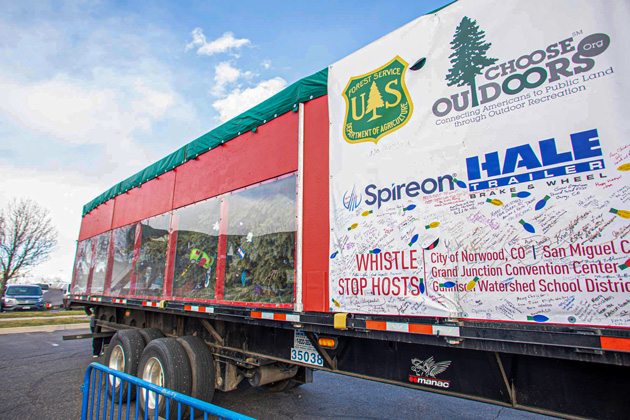 This year, the Forest Service harvested the People’s Tree — a 55-foot-tall, 24-foot-wide Engelmann spruce — from the Grand Mesa Uncompahgre and Gunnison National Forests, where the NWTF has worked with various partners, including the Forest Service, to positively impact the health of the approximately 3 million acres contained within these national forests.

Located on the western slope of the Colorado Rockies, the Grand Mesa Uncompahgre and Gunnison National Forests is the largest national forest unit in the Rocky Mountain Region and the fourth largest in the contiguous 48 states. Within the GMUG, there is a variety of forested and non-forested riparian areas (streamside habitat), and it contains the headwaters to three major rivers, the Gunnison, Uncompahgre and the San Miguel. 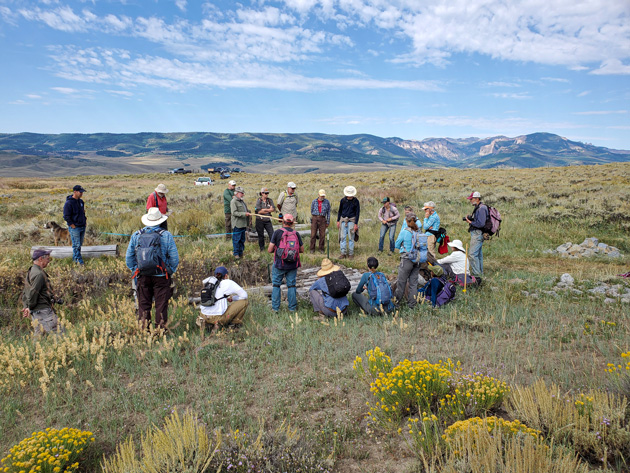 The NWTF, the Forest Service and an array of partners are making a substantial impact in the GMUG, combatting spruce beetle infestations and sudden aspen decline and enhancing the forests for the wildlife and citizens of Colorado alike. Many consider the People’s Tree as a symbol of unity, and this was especially fitting for this year’s tree as unity is the driving force that allows the NWTF and its partners to accomplish so much beneficial work at the field level or at a policy level.

Sudden aspen decline has impacted about 229,000 acres of aspen trees, and 223,000 cumulative acres have been impacted from spruce beetle mortality. Though these are two different disturbances affecting the forests, their causes are linked.

“Extensive drought and unusually warm temperatures have exacerbated what would otherwise be normal forest disturbances,” said NWTF District Biologist Jamie Nogle. “Beetle infestation and aspen decline are both normal occurrences on GMUG, but the rate at which they are increasing tree mortality is not common. These disturbances are, therefore, degrading wildlife habitat, making the forests less resilient to these and other natural disturbances and increasing the forests’ susceptibility to wildfire.”

The acres affected by both the beetle infestation and sudden aspen decline account for approximately 30% of the spruce-fir and aspen vegetation within GMUG.

“To combat both the sudden aspen decline and the spruce beetle infestation on such a large scale, resiliency has to be improved in the spruce-dominated stands,” Nogle said. “This is done by reducing stand density, increasing diversity of age classes and promoting other tree species within the stand.”

The NWTF and the Forest Service established the Buffalo Forks and the Hubbard Stewardship Supplemental Project Agreements, both aimed at improving forest resiliency to disease and wildfire within GMUG and transforming the national forests to a less susceptible state, while also improving wildlife habitat.

2020 was an unprecedented year for wildfires in the western U.S. It was a sobering reminder of how important fuels reduction work is, and with increased mortality from spruce beetle infestations and sudden aspen decline, reducing the number of dead and diseased trees that serve as fuel for wildfire on GMUG is especially critical. The Buffalo Forks agreement consists of two fuel load reduction projects, the Rainbow and Tin Cup Fuels Reduction and the Soap Creek Fuels Reduction. Both of these projects were completed in 2020, significantly improving forest health on 162 acres.

“Reducing fuel for wildfire is important throughout GMUG, but these two projects were especially important as they are within wildland-urban interface, which is a fancy term for areas where forests meet human communities,” Nogle said. “The primary intent for these projects was to protect neighboring communities while simultaneously making these stands more resilient to wildfire.”

This work involved decreasing ladder fuels, which are any vegetation that would allow a fire to move from the forest floor to the tree canopy. Once a wildfire moves to the tree canopy it is more likely to spread at a faster pace and is more difficult for wildland firefighters to manage.

In addition to reducing wildfire susceptibility near bordering communities, the Buffalo Forks agreement also included the NWTF and the Forest Service partnering on erosion control and restoring wet meadow areas on the GMUG. Two projects of emphasis were the Flat Top Mountain and Black Sage Pass wet meadow restoration projects.

“Certain wetland areas have been drastically affected by erosion and prior human impact, causing incised channels, which disconnect streams from their floodplains, worsening erosion and degrading wildlife habitat,” Nogle said.

The projects created structures that reconnect streams with their floodplains, allowing water to disperse more evenly while reducing erosion and promoting native plant species that are imperative for wildlife.

Like the Buffalo Forks agreement, the NWTF and Forest Service’s Hubbard agreement prioritizes reducing fuel loads, increasing resiliency and improving wildlife habitat. Through the Bonham Roadside Mastication project, the NWTF and the Forest Service partnered with Ute Water to complete nearly 8 miles of roadside mastication to create fuel breaks in the event of a wildfire or prescribed fire. 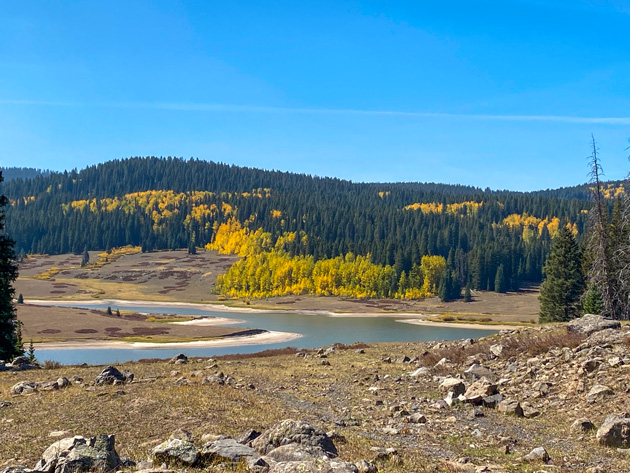 “This proactive approach provides protection for a critical portion of the Ute Watershed that provides drinking water to 80,000 people on the Western Slope,” Nogle said. “Partnership with water and utility providers, like Ute Water, is a great opportunity to increase the pace and scale of projects on the GMUG.”

The Hubbard agreement also includes projects aimed at enhancing additional aspects within GMUG, including reforestation, trail reconstruction and additional fuel reductions, among others.

The forestry management within GMUG between both the Buffalo Forks and Hubbard stewardship agreements captures the essence of what the People’s Tree symbolizes for so many: unity — uniting to enhance and conserve our nation’s natural resources and wonders that are not owned by any one entity, but that are owned by all Americans.

“The GMUG partnership is fairly recent and has already been so productive for everyone involved,” Nogle said. “The NWTF is in discussion and developing the next stewardship agreement with the Forest Service, which will include another timber sale and more service work aimed at benefitting GMUG even further.” 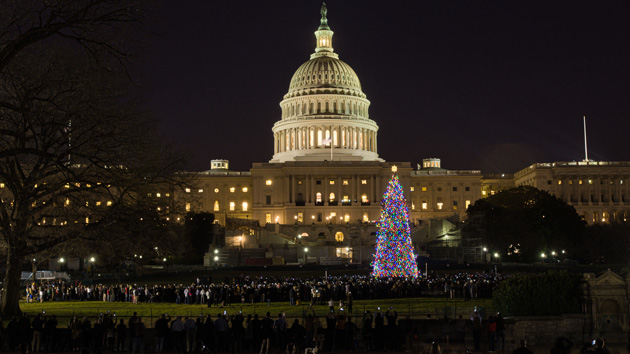 The People’s Tree from GMUG embodies the strength of partnership between the NWTF and the Forest Service, not just on GMUG, though, but on all national forests where the two organizations are closely working together. Partnerships with government agencies like the one on GMUG are possible because of NWTF’s presence in Washington D.C. to influence policy that benefits conservation and America’s sportsmen and women. If the People’s Tree symbolizes unity, its journey to the nation’s Capitol, where it sits outside the world’s most widely recognized paragon for democracy, symbolizes the hard work the NWTF does to amplify conservation policy.

The 116th Congress may have been one of the most effective legislative bodies for conservation and sportsmen policy in a lifetime, and that is due, in part, to the NWTF’s efforts to get various legislation passed, including Modernizing the Pittman-Robertson Fund for Tomorrow's Needs Act, Great American Outdoors Act and the John D. Dingell, Jr. Conservation, Management, and Recreation Act, among others.

“The reason our efforts are so effective in D.C. is simply because our mission is nonpartisan,” said Joel Pedersen, NWTF director of government affairs. “We are able to act as a nonpartisan entity that provides insight and recommendations to better things everyone cares about — clean water; clean air; public recreation; healthy, safe and fire-tolerant forests; and wildlife. During an election year, when both parties cannot agree on hardly anything, these are bills lawmakers can universally agree on and tend to pass.”

While the NWTF is a strong advocate in D.C., often times the partnerships that allow NWTF to work so efficiently with government agencies start on the ground level.

“We come at this from an aspect of what an agency needs on the ground to benefit turkeys, and other wildlife and create healthy forests and healthy habitats, and then we work with the agency to figure out the best mechanism to do that,” Pedersen said. “Though we generally start at the ground level, it often takes it being a priority at the D.C. level, too, to make it work.”

In addition to all the work with the Forest Service, another great example of the NWTF forging a partnership from the ground level to the D.C. level is its National Forestry Initiative with the USDA Natural Resources Conservation Services. The agreement facilitated cooperative staffing to sustain and improve forest ecosystems on private lands throughout the country.

“Over the last couple of years you've seen our National Forestry Initiative with the NRCS stand up,” Pedersen said. “Well, that started from recognition of our partnerships at the ground level. We are able to determine what was needed and what the barriers were to collaboratively reach private landowners. We built a program from the ground up, but ultimately it happened because we were also in D.C. ensuring the chief of the NRCS and the Secretary of Agriculture understood the issues we were trying to address. Because of this, in the case of the NFI, they agreed to send $5 million to our partnership over the next five years to make sure we can get the proper work done.

“Because we approach these agencies with the end goal in mind – one that benefits both their mission and ours, and not the politically expedient goal, I think the NWTF will have lasting presence across the agencies that can resonate with whatever administration is in the White House.”

The NWTF has taken its cue from the wild turkey, which knows no boundaries as it inhabits private lands, Forest Service lands, state lands, U.S. Fish and Wildlife Service lands and others. Likewise, the NWTF’s reach remains unfettered when it comes to enhancing wildlife habitat and fulfilling its mission.

To read the full article, visit check out the Jan/Feb issue of Turkey Country Magazine or view online here: https://www.nwtf.org/nwtf-magazines