Michigan’s outdoors should be accessible for all people to enjoy. All too often, that isn’t the case. Whether it’s a lack of understanding or inaccessible facilities, outdoor spaces aren’t always welcoming to people with disabilities. 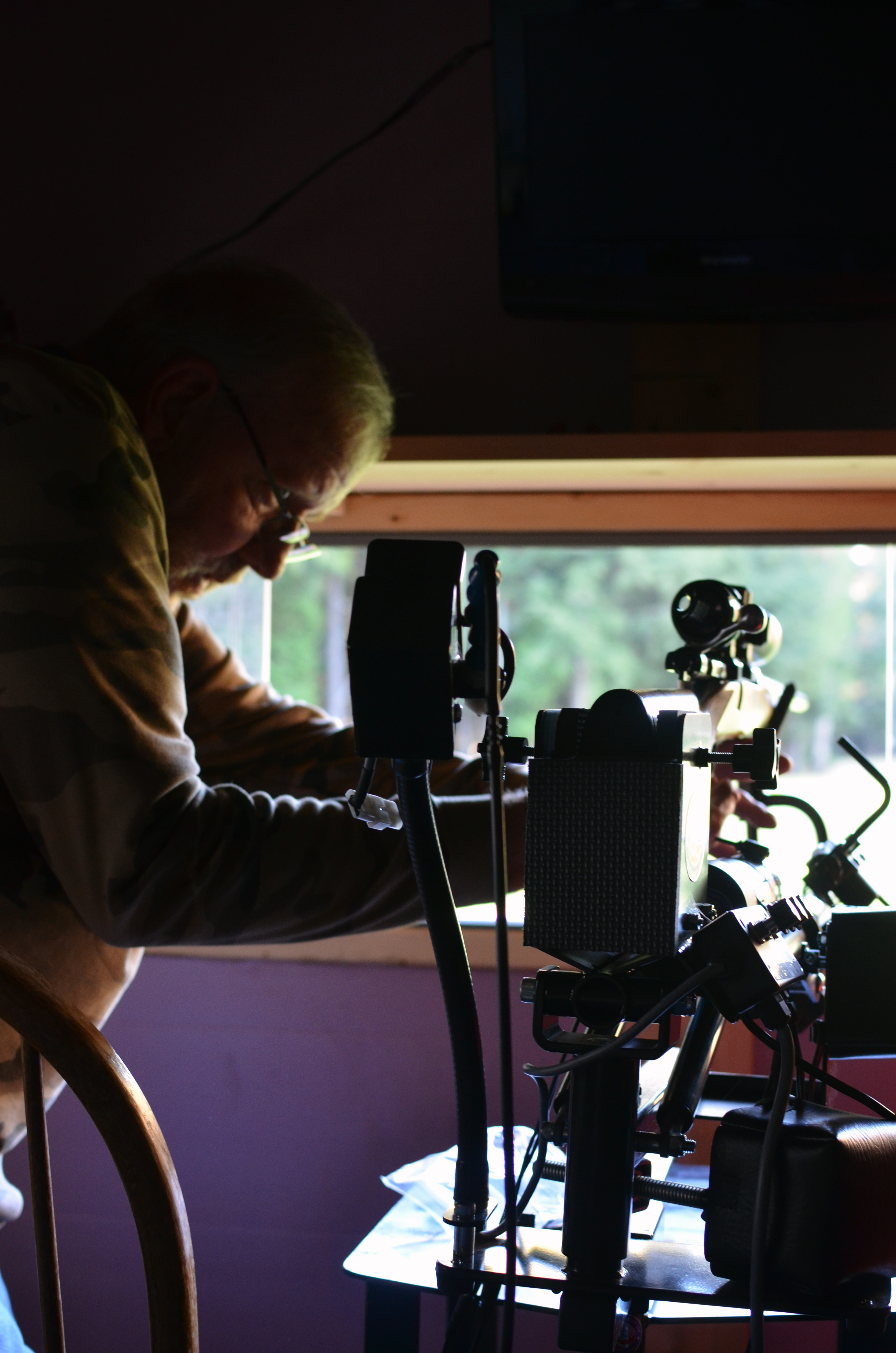 Ken Buchholtz makes an adjustment to the apparatus inside one of the hunting trailers developed to make hunting more accessible to the disabled.

That’s starting to change, thanks in part to groups like the Bays de Noc Gobblers, a chapter of the National Wild Turkey Federation. For years, the Upper Peninsula-based chapter has utilized the federation’s Wheelin’ Sportsmen outreach program, which focuses on making the outdoors more accessible for hunters.

As a result, the Gobblers have become a frontrunner in providing accessible hunting. Specifically, the group developed mobile trailers designed not only to accommodate wheelchair users, but also to ensure a safe, fun hunting experience for people of all mobility levels. These unique trailers make it easier for hunters with disabilities to enjoy the outdoors without barriers.

Each trailer is large enough to allow wheelchair users space to move around. Inside, a sliding window gives hunters a view of the target area and allows access for a gun or crossbow with a specially equipped “sip-and-puff” trigger actuator – an adaptive piece of equipment which lets the hunter pull the trigger by taking in a breath on an attached tube.

A camera connected to the gun’s scope feeds video of the target area to a 19-inch monitor affixed to the wall above the window, allowing those in the trailer an up-close view. A joystick helps the hunter take aim.

To Ken Buchholtz, president of the Bays de Noc Gobblers and chairman of the Wheelin’ Sportsmen program, the trailers are a necessary step toward keeping Michigan’s outdoors enjoyable for everyone. 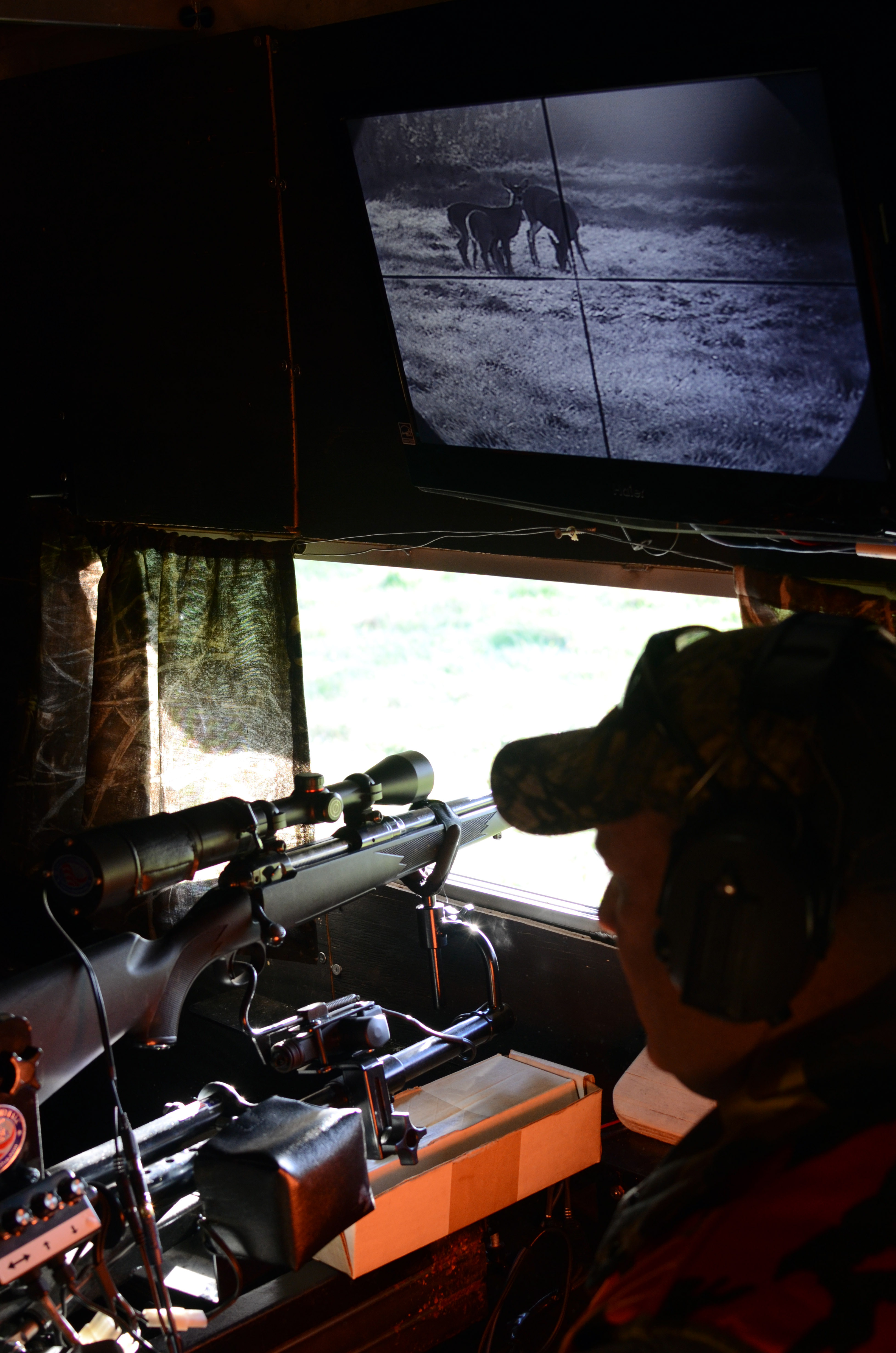 A video screen inside the hunting trailers gives hunters a close-up view of the rifle scope image. Pictured in the trailer is Michigan Department of Natural Resources Conservation Officer Dave Painter.

“If there’s a wheel, there’s a way, and the smile makes it all worthwhile,” he said.

Buchholtz also sits on the Accessibility Advisory Council for the Michigan Department of Natural Resources and has received the DNR’s Partners in Conservation award, the Volunteer of the Year award from the National Association of Activity Professionals, and the Elk’s Club Citizen of the Year award, among others.

But accolades aren’t the reason Buchholtz is so involved in accessibility issues. For him, the Wheelin’ Sportsmen is more than an outreach program – it’s a passion.

According to Buchholtz, the accessible trailer program grew from people concerned about the lack of infrastructure to support hunters with disabilities who wanted to do something about it.

What started as an ambitious idea quickly became something tangible.

The Bays de Noc Gobblers, made up entirely of volunteers and funded by grants and community donations, are leaders in the state and the nation when it comes to building and operating these accessible trailers.

Currently, the Gobblers have four permanent accessible deer blinds and three hunting trailers available for use. In the past few years, as visibility and understanding of accessibility needs have grown, the group has even seen increased requests for these trailers from other states.

The trailers aren’t just for seasoned hunters, either. The Gobblers also go out to assisted living homes, where residents can try out the equipment and hunt – some for the first time in their lives.

“People tell me they always wanted to go hunting, but never had the opportunity to,” Buchholtz said. “When these hunters bag their game, the program also helps pay for the processing of the animal.”

For hunters with disabilities, programs like these are a much-needed tool. With the support of groups like the Bays De Noc Gobblers and programs like the Wheelin’ Sportsmen, disabled hunters can bridge accessibility gaps and get back to Michigan’s beautiful outdoors. 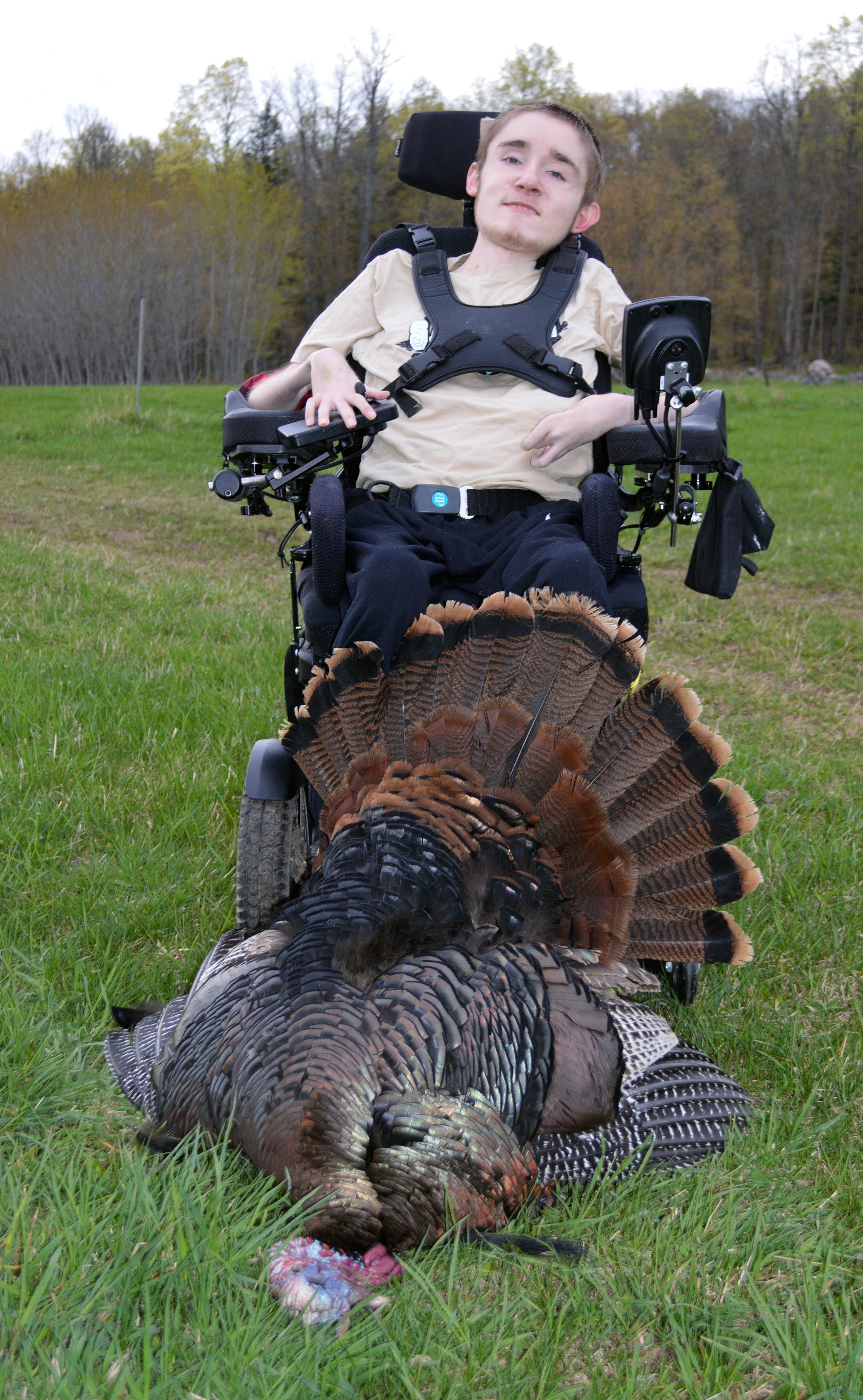 Robbie Ivey harvested a bear on his very first hunt while using the Bays de Noc Gobblers’ accessible trailer. This year, he shot a turkey.

For DNR Conservation Officer Dave Painter, the trailers signify more than an opportunity to get hunters with disabilities out in the field. They’re a rallying point for the communities that utilize them.

After being out in the field taking pictures of a bear in spring 2010, Painter ran into a pharmacy to get the film developed. There, he struck up a conversation with a cashier, who mentioned that her 11-year-old son, Robbie, would love those pictures.

She said Robbie loved all kinds of wildlife, but he couldn’t get out into nature the way he wanted. Painter gave her copies of the bear pictures and asked if Robbie would be interested in hunting. Robbie wanted to hunt, she said, but he wouldn’t be able to hunt in the traditional way.

Robbie has muscular dystrophy, a genetic disease that results in overall muscle weakness that progressively worsens. At 11, he used a wheelchair, but it was not equipped to move effectively in the woods.

After meeting Robbie, Painter was determined to get him out hunting in the outdoors he so clearly cherished.

Painter saw Buchholtz on a local outdoors show in the U.P. and immediately saw a clear connection between the Gobblers’ efforts with the Wheelin’ Sportsmen program and his own efforts to get Robbie out hunting.

Painter contacted Buchholtz, who eagerly described the accessible hunting trailer the Gobblers had developed, and assured Painter the group would “make it happen.”

The Bays de Noc Gobblers set up an accessible trailer near Crystal Falls, and Robbie shot a bear on his very first hunt.

After seeing how excited Robbie was, and how positively the experience affected him, Painter went to Wildlife Unlimited of Iron County. Together, they were able to raise $16,000 to build their own aluminum-enclosed accessible hunting trailer. The Gobblers offered support, giving pointers and suggestions to help improve the hunting trailer experience. 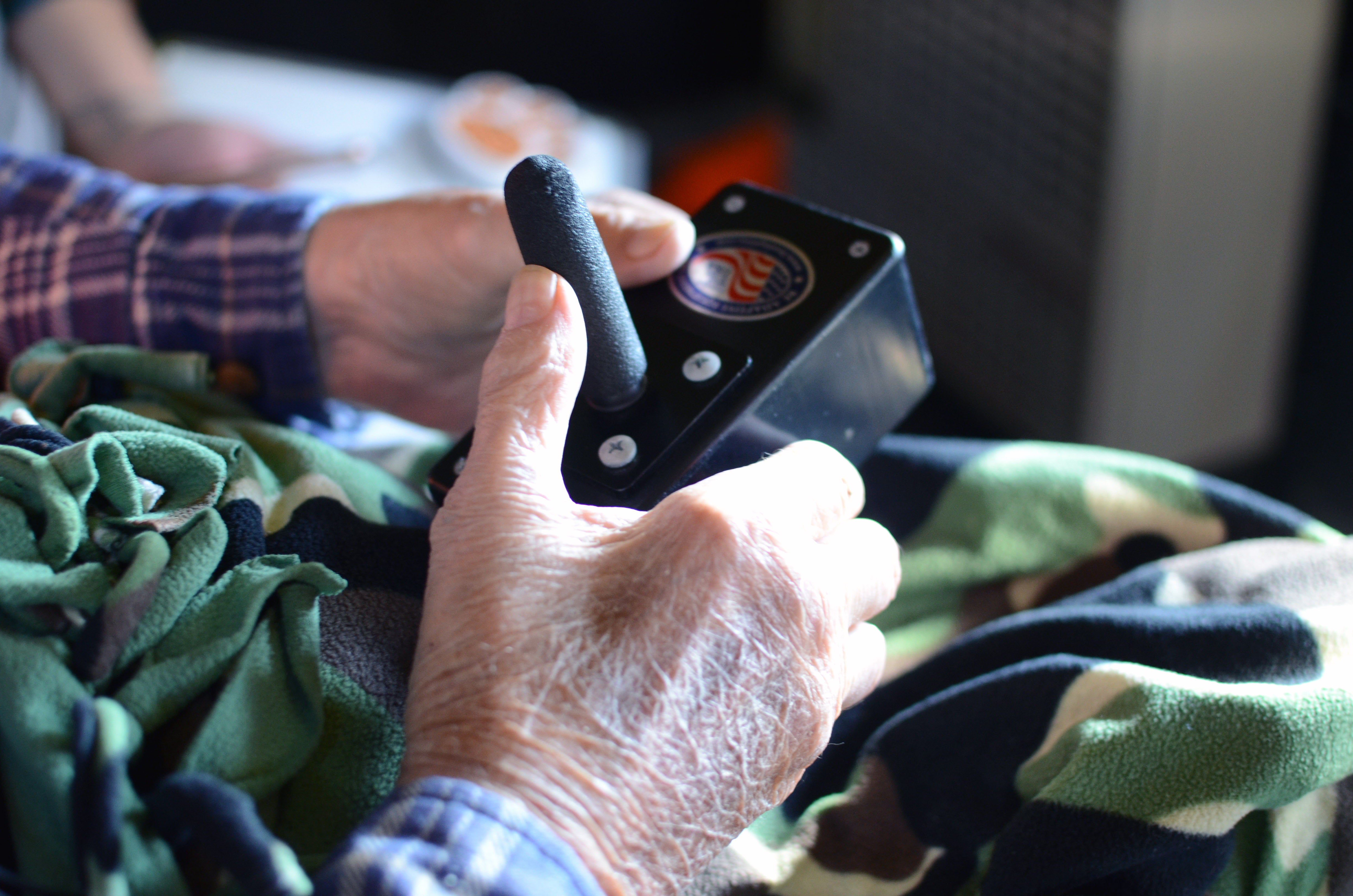 A joystick inside the trailers helps hunters take aim.

“Quite often in hunting, we’re always fighting over something – like technique or equipment,” Painter said. “We don’t see any of that. Everyone thought it was a good idea, everyone wanted to be a part of it.”

Doctors had previously told Robbie’s mother that he wouldn’t live past the age of 15; he’s 20 years old now, and though he has lost all mobility, he still hunts. Painter controls the joystick, and Robbie tells him when to stop. With the sip-and-puff mechanism, Robbie still gets to bag his own game.

“We’ve had some fantastic hunts,” Painter recalled. “He’s still able to get out and be successful.”

The trailers have even turned Robbie into a local celebrity.

Robbie is known as the guy who first used the accessible trailer in Iron County. When he goes out to Wildlife Unlimited banquets or around town, people will come up to him and ask him how he’s doing, what he’s hunted recently. It serves as a point of connection, not only with nature and hunting, but between people.

Such connection is important to the DNR, too.

Every person should be able to enjoy the bounty of Michigan’s state parks, recreation areas and forests. The development of devices like the accessible hunting trailers is part of a broader conversation on accessibility in public spaces.

The DNR is taking an active part in that discussion, and over the past few years has made a concerted effort to make some state parks more accessible to all visitors.

“We want to make our natural resources available to anyone of any ability,” said Michelle Coss, DNR parks and recreation fund development coordinator. “We’re trying to do what we can to remove those barriers and hesitations for people.”

Not only has the DNR been incorporating accessible hunting features in some of its recreation and game areas, it has been giving more thought to accessible recreation in general. 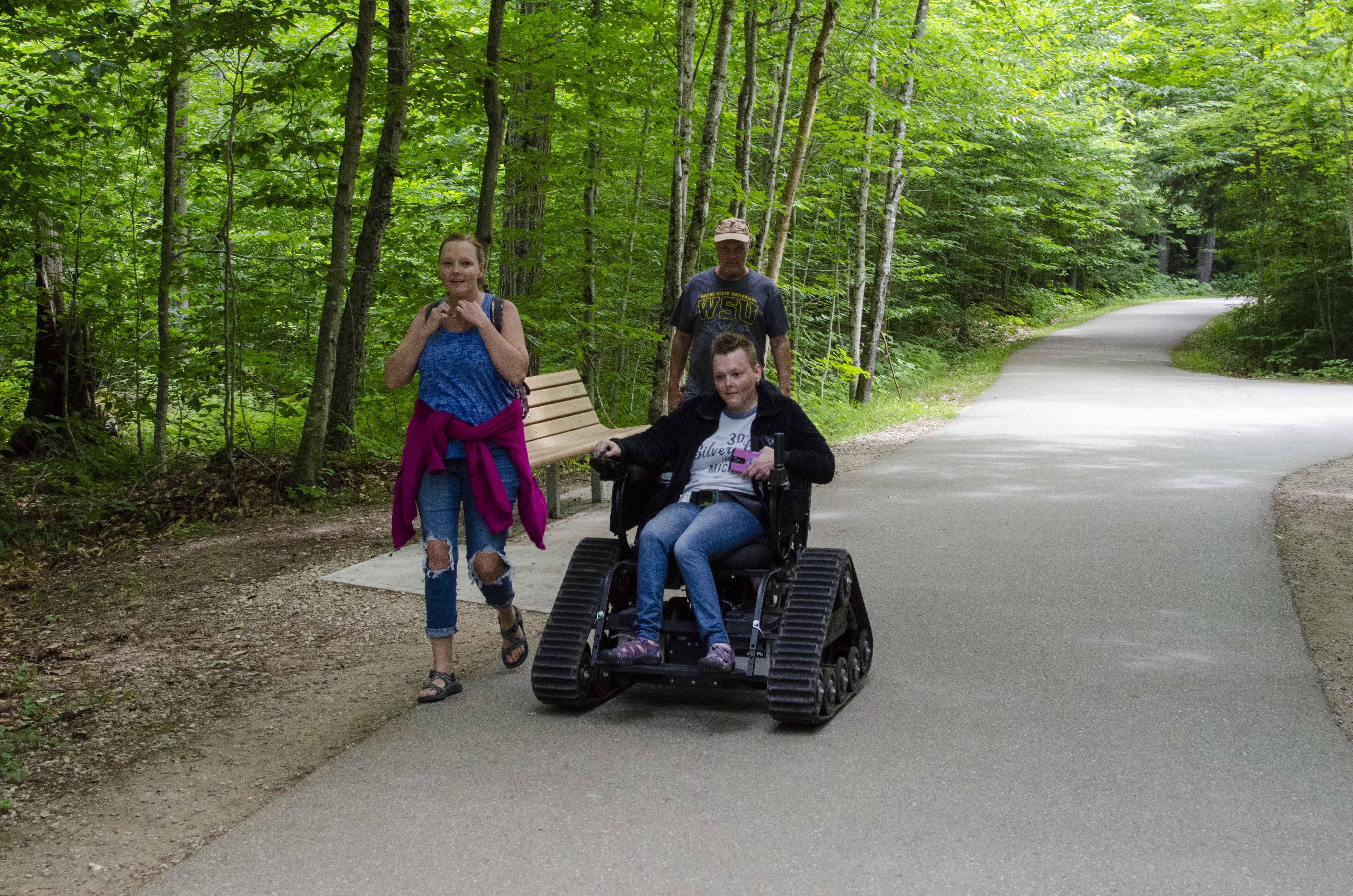 The Michigan Department of Natural Resources has made several accessibility improvements at Michigan state parks, including track chairs that are designed to move through terrain traditional wheelchairs may find challenging. This chair is in use at Tahquamenon Falls State Park.

The availability of accessible fishing piers and kayak launches gives visitors a chance to make long-lasting memories on Michigan waterways, and with the introduction of track chairs in state parks, visitors with mobility challenges can explore areas of the parks that traditional wheelchairs may not be equipped for.

These chairs, which are currently in use at five state parks, are just one part of the DNR’s commitment to integrating accessibility-focused designs and programs into all of Michigan’s state parks.

“Accessibility is one of our big priorities moving forward,” Coss said. “For people with disabilities, we want them to know there are things being put into place that will make it easier for them to enjoy the parks like everyone else.”

Michigan Operation Freedom Outdoors is a cooperative partnership with the DNR and several other entities that provides outdoor recreation opportunities for individuals with health challenges; and coordinators support networks which facilitate recovery through connecting with nature.

Since 2013, when the partnership began, the partnership has helped hundreds of individuals connect with hunting, hiking, birding and fishing opportunities that have helped them return to the outdoor activities they enjoy.

In addition, several accessible hunting blinds have been installed at the Sharonville State Game Area, along with the use of tracked wheelchairs to help disabled individuals enjoy the outdoors.

Making state parks, recreation areas, waterways and forests accessible is more than checking off a box. It’s about making sure that all visitors have the chance to experience the outdoors and make lifelong memories in Michigan’s beautiful natural areas.