There are many signs that wildlife species are thriving from forest management. Maybe the most obvious sign is seeing wildlife more often in greater numbers within the area that had improvements. However, seeing wild turkey after wild turkey from the helicopter used for prescribed fire operations is an indicator that these birds are responding especially well to forest management. This is exactly the case in the Cherokee National Forest through the Hogback Stewardship Agreement between the NWTF and the USDA Forest Service.

The approximately 659,000-acre Cherokee National Forest in east Tennessee is a hub for an array of wildlife species, including Eastern wild turkeys. Moreover, the NWTF has had a long history of partnering with the Forest Service and the Tennessee Wildlife Resource Agency on the national forest to enhance wildlife habitat and improve access and opportunities for hunters.

“Throughout the 90s and early 2000s, the Cherokee Chapter of the NWTF, along with the Forest Service and the TWRA, leveraged money to fund on-the-ground projects throughout the south end of the forest through Challenge Cost Share Agreements and, subsequently, through NWTF’s Superfund,” said Cherokee National Forest Supervisor JaSal Morris. “All-in-all, around $20,000 - $60,000 per year was being spent for great, on-the-ground projects such as daylighting, seeding, mowing and other maintenance.”

Also, around this time, conservation representatives from the NWTF, Forest Service and TWRA gathered at the Cherokee to see some of the forest management that was happening. They liked the results they saw but were struck by the lack of early successional habitat throughout the forest.

Early successional habitat is characterized by low-growing native grasses, forbs and bushes and is created through various forest management practices, including thinning overly dense tree stands, mulching and prescribed fire, among others. This low-growing vegetation structure provides ideal foraging, nesting and brood-rearing habitat for wild turkeys and allows for turkeys and many other species to travel through the forest easily. 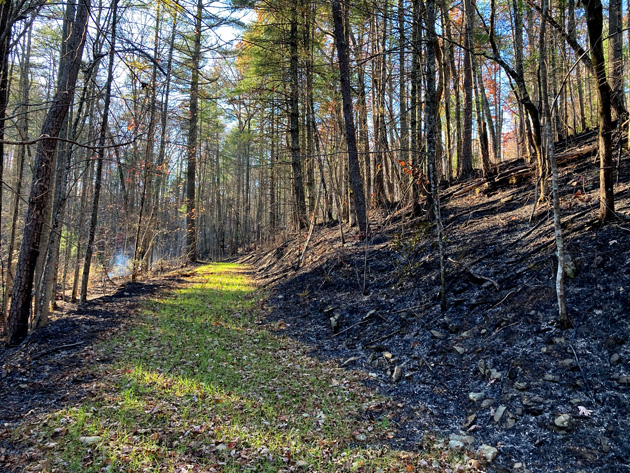 To increase this beneficial habitat type, all parties collaborated to create what would be called the Hogback Stewardship Agreement, focused primarily on the South Cherokee Wildlife Management Area but on other parts of the national forest too.

One of the early breakthroughs of the stewardship agreement was the NWTF’s ability to facilitate a timber harvest on an isolated timber stand that, if removed, would build significant momentum behind the project.

“The remote location of the timber sale units, coupled with the long distance the timber had to be hauled to reach a paved road, severely impacted the number of contractors that were interested in harvesting the timber,” said Philip Earhart, Cherokee National Forest South Zone Wildlife Biologist. “In fact, the first attempts to sell the timber commercially went without a bid. However, the NWTF found a champion in an avid hunter and forester who has been engaged with conservation on the Cherokee since the late 80s. The NWTF bought the sale, and the conservation-minded forester began cutting on the first three units.”

Since the timber harvests, Forest Service staff have implemented prescribed fire in conjunction with other forest management on all three of these units, and the improvements for wild turkeys and other game and non-game species have been an overall success.

“When our staff were conducting aerial prescribed fire in close proximity to these recently harvested and burned areas, they saw turkey after turkey from the sky,” said Earhart. “Though this is anecdotal, the results are astounding and we are happy to see the results of this project unfold. It’s safe to say these birds are responding especially well to this management.”

The prescribed burns were conducted using a variety of methods including hand ignition with firefighters on the ground, helicopter ignitions and, for the first time on the Cherokee National Forest, Unmanned Aircraft Systems (UAS), otherwise known as drones.

“The addition of UAS to the burn program is long overdue” said Mike Haisten, Fire Management Officer for the south zone of the Cherokee National Forest. “They can greatly reduce exposure to hazards for personnel and create new opportunities to burn with less boots on the ground.”

“We put a lot of thought into when and where we burn in this area” Haisten said. “We pay a great deal of attention to the seasonality and firing methods used in specific areas to ensure we get the desired effects. The timing, intensity and location of the prescribed burns were coordinated to compliment other forest management treatments in the project area. The result of this coordination has led to a more resilient ecosystem and better habitat for wildlife.”

The Hogback Stewardship Agreement is a collaborative effort that not only required multiple partners, but required an interdisciplinary approach to forest management — timber harvesting, herbicide treatments, prescribed fire, mastication and planting, among others, all working in unison.

Bo Reynolds, Cherokee National Forest Wildlife Technician, has been instrumental in the success of this project, using the right management technique at the right time.

Reynolds was cognizant of which management technique to use to build upon the previous. For instance, knowing prescribed fire would be implemented, Reynolds chose to use hack and squirt methods on timber stands rather than slashing. This reduced the amount of fuels on the ground that  may have resulted in fire intensity in excess of what was desired for management purposes. This project has required a little bit of everything in the Forest Service’s repertoire and will continue to be a focus area for management.

This project is emblematic of the NWTF’s conservation delivery — there is no one specific management technique or one organization or agency doing all the work to benefit wildlife habitat and overall forest health. Instead, it’s the harmonious collaboration of partners, management practices, resources, areas of expertise and, most of all, dedication.