We had so much fun doing it last year that we thought we would bring back the broadhead testing.

As people’s opinions on what broadhead to shoot is about as divisive as talking about what truck to drive, we won’t be making any recommendations. We simply just want to let you know the observations made from slinging all these different blades downrange.

We conducted this test in a manner that simulated the effectiveness for taking body shots on turkeys. All broadheads were affixed to Gold Tip arrows and shot from a 2017 Bowtech Reign 7 with a Ripcord Code-Red rest and Trophy Ridge sight. Penetration tests were done by shooting into a block target, albeit and old one, and damage tests were done by shooting the broadheads through raw oven-roaster chickens.

Here are the results:

Cold Steel - Cheap Shot 100grain
Type: Fixed 2-blade
Cutting Surfaces: 1¼-inch
Sharpness out of the package: The blade is made of a polymer that is designed to be a cheap substitute for steel. It isn’t sharp to the touch but its serrated edges will surely tear paper.
Observations at 20 yards: Flew nearly identical to the field point. Both hit center of the bullseye. The Cheap Shot was pretty quick as well.
Penetration on Rinehart Block: It finished middle of the road vs all other broadheads landing at #5.
Damage: Cut through the breast plate or the chicken. The wound channel was quite clean looking despite the blades not being sharp.
Durability: These broadheads are not designed to be fired at multiple animals. Cutting through the chicken was enough to take a chip out of the polymer head, and another broadhead was lost when it was hit by a fieldpoint in the 20yard flight test. 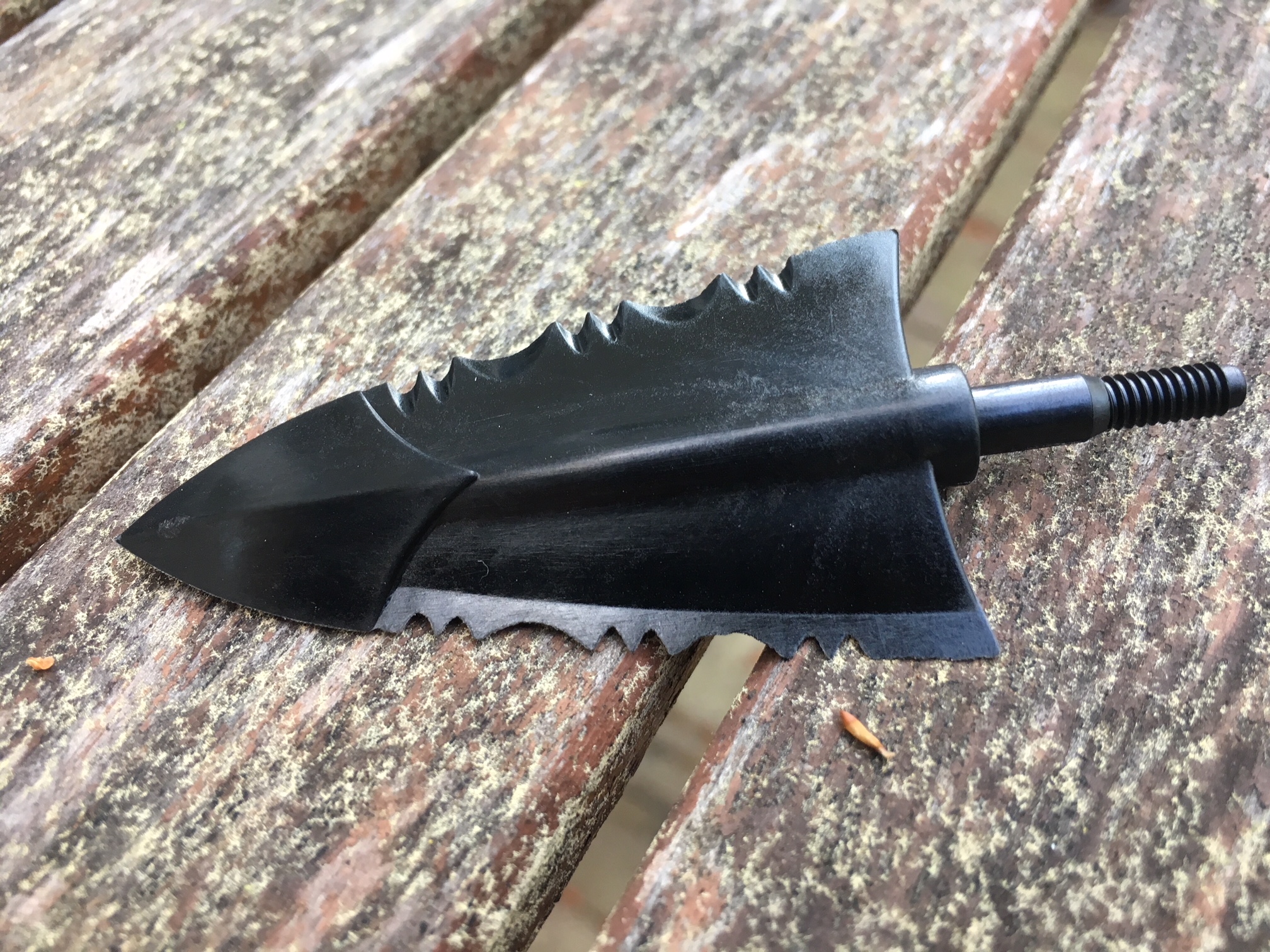 Shrapnel – FX 125 grain prototype (not yet in production)
Type: Fixed 4-blade
Cutting Surfaces: greater than 1 ¼ inch but not listed
Sharpness out of the package: Just like the EX tested last year, the blades were super sharp.
Observations at 20 yards: The broadhead seemed kind of noise and hit nearly 2 inches outside of the bullseye. Some tuning will be needed.
Penetration on Rinehart Block: This broadhead finished eighth of all the broadheads.
Damage: One of the blades bent backwards in the block target as I don’t think the blade design is meant for high-density foam. Still, I bent it back to fire through a chicken and was not disappointed. The wound channel was massive, and though the blade completely broke on this second shot, it cleanly cut through a leg bone in the process.
Durability: As mentioned, one of the main blades broke but the rest of the blades, and the removable tip, were just as a sharp as they were when I first removed it from the package. 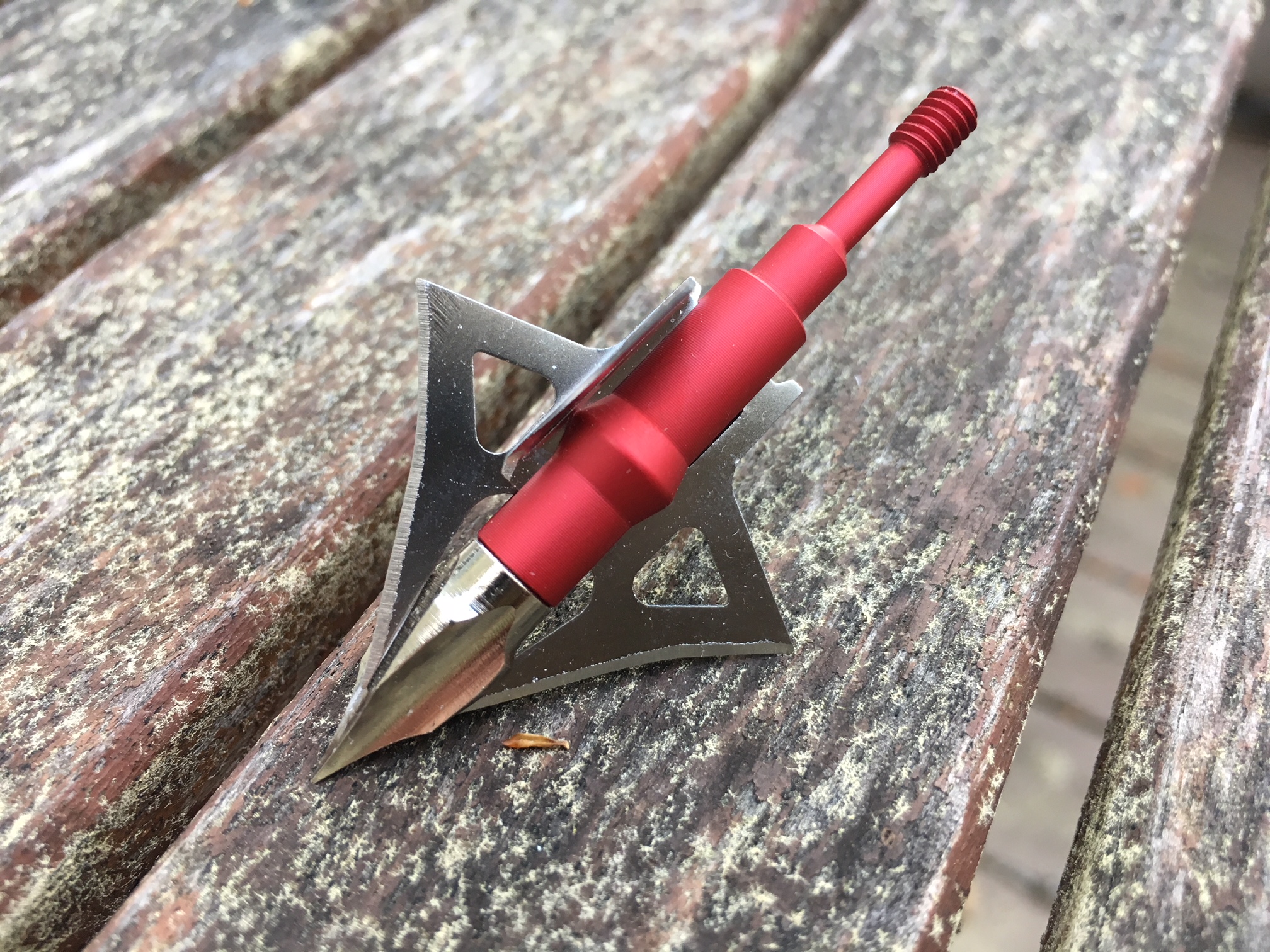 TruGlo – Backflip
Type: Expandable 3-blade
Cutting Surfaces: 1 1/2-inch cut diameter
Sharpness out of the package: I was impressed with the titatium CNC’ed ferule. The tip was super sharp, and the stainless blades easily cut paper.
Observations at 20 yards: This broadhead landed within an inch of the field point.
Penetration on Rinehart Block: Ranked fourth in penetration
Damage: Great looking wound channel, the blades deployed as intended and the blades cut through one of the legs.
Durability: One of the blades did snap off, but the package comes with replacements. 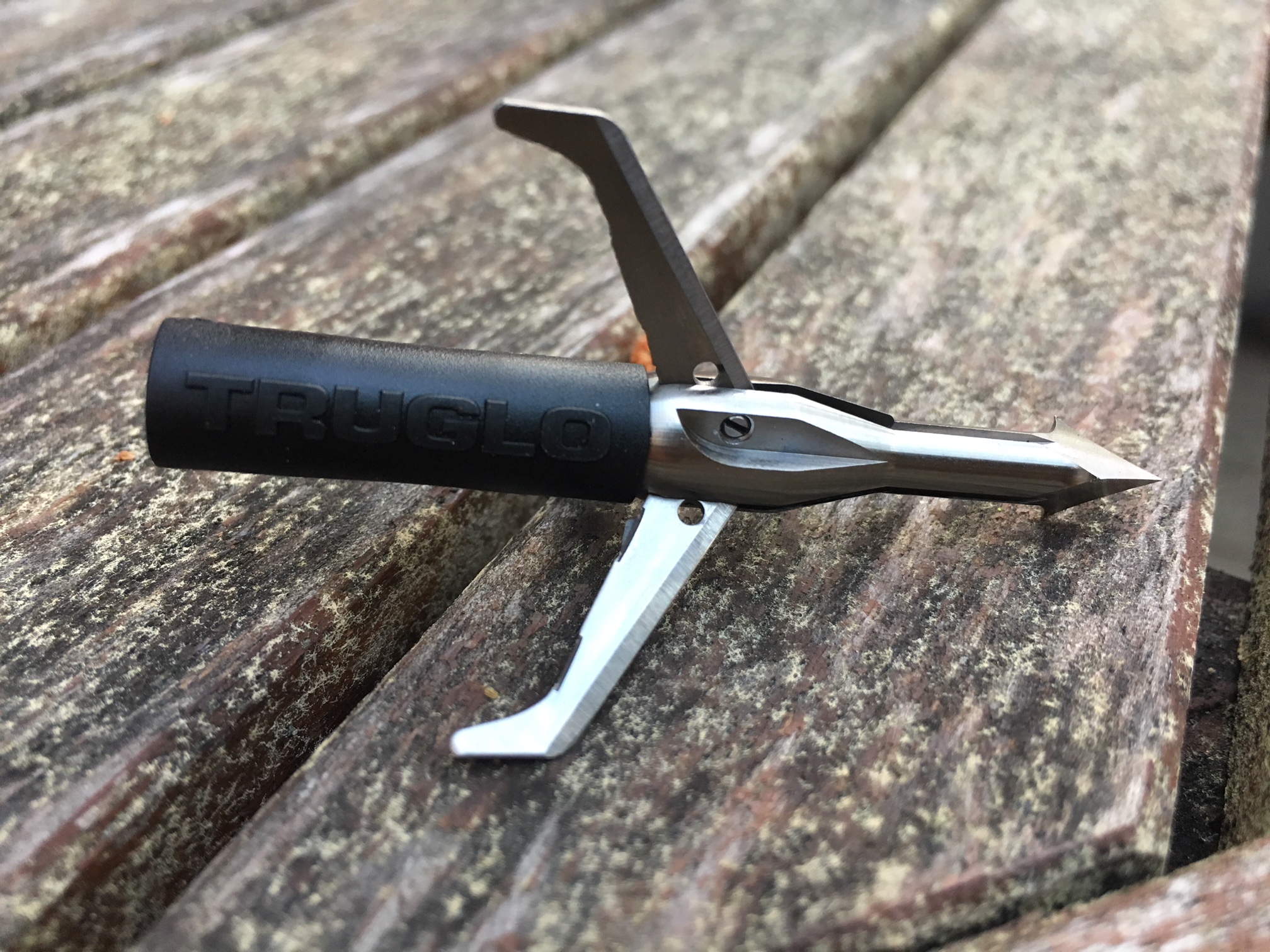 Magnus – Black Hornet Serrazor (100 grain)
Type: Fixed 4-blade
Cutting Surfaces: 1 1/4 inch for main blade and 7/8 inch for bleeder blade
Sharpness out of the package: The main blades are serrated, but the bleeder was razor sharp. The tip of the broadhead had noticeable dull spots.
Observations at 20 yards: The flight variation from a field point was less than an inch. There was some light noise to it, but it wasn’t alarming.
Penetration on Rinehart Block: Finished second to only the Swhacker 150.
Damage: The cut left a clean “+” mark through the bird and cut through both drums on the way through.
Durability: The bleeders didn’t seem to be phased by the chicken legs and this blade looks like it could easily be used again with a little cleaning. 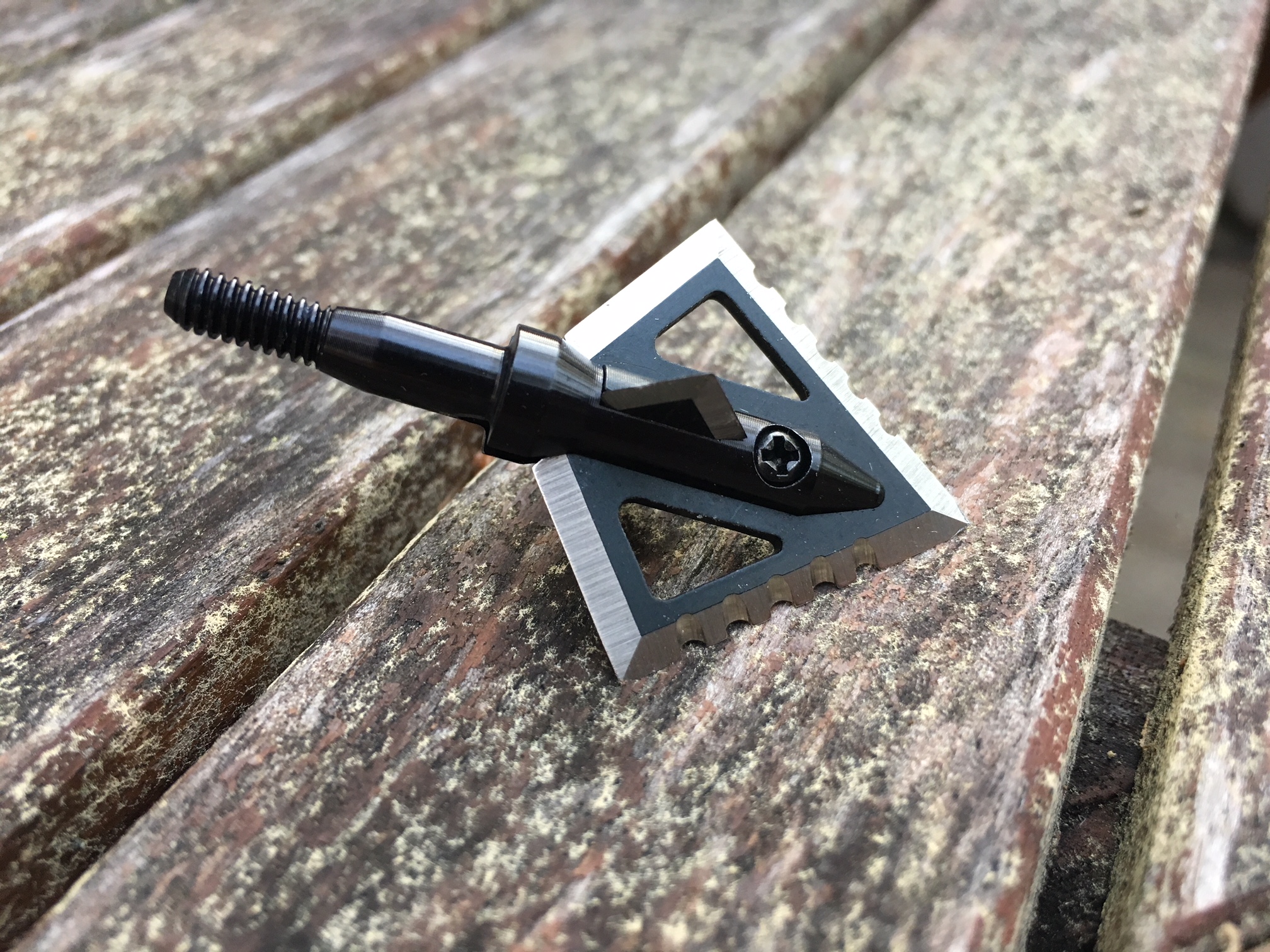 Shrapnel – AL (100 grain)
Type: Small Game Head (legal in some states for turkeys, check your regs before using)
Cutting Surfaces: n/a
Sharpness out of the package: This is basically a modified field point that implements aggressive talons instead of blades.
Observations at 20 yards: This small game point had some noise to just in drawing the bow as the talons are designed to oscillate in flight. When I fired it down range, It was quieter than I thought it would be.
Penetration on Rinehart Block: This was bottom in penetration, but my block target wasn’t too happy. The talons left quite the indentation where the arrow hit.
Damage: The impact of this arrow hitting the chicken resulted in the bird falling off the stand. While it doesn’t have blades, the talons managed to break both legs on entry and exit and there was still a complete pass through.
Durability: The field point portion of the tip was unharmed, but the talons were unusable after shooting at both the block target and the chicken. 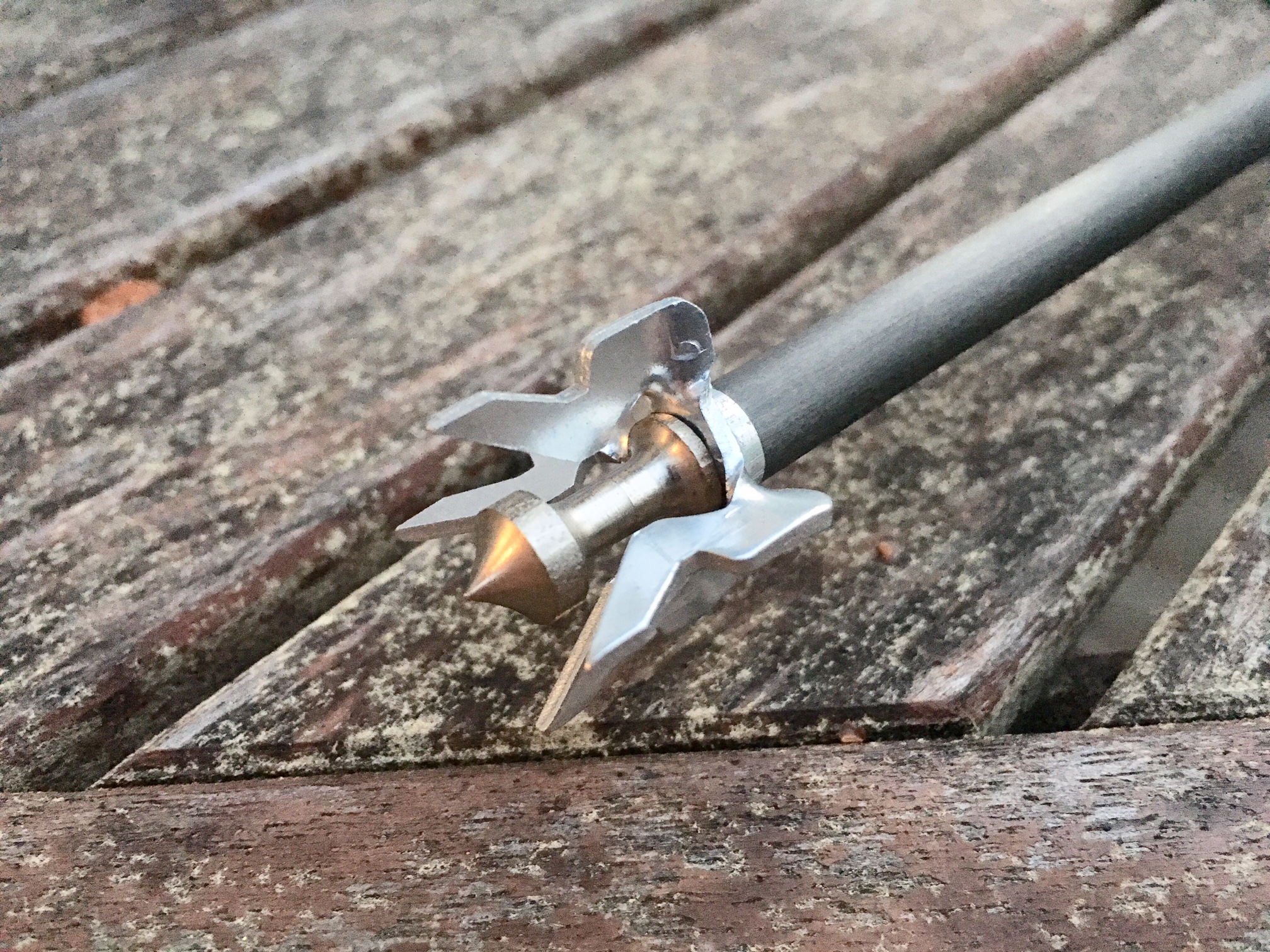 Rage – Turkey Xtreme (100 grain)
Type: Expandable 2-blade
Cutting Surfaces: 2.3 inch expansion blades
Sharpness out of the package: The blades easily cut paper and also were able to shave some hair off my hand. The leading point on the broadhead could be sharper
Observations at 20 yards: As designed, it flew like a field point, and it produced little noise
Penetration on Rinehart Block: It was fourth in penetration
Damage: As expected, it left a massive cut through the chicken, slicing through both leg bones.
Durability: I used a toothpick to clean some of the meat from the ferule, washed the broadhead and arrow and it looked brand new again. The blades didn’t have any noticeable nicks or dents. 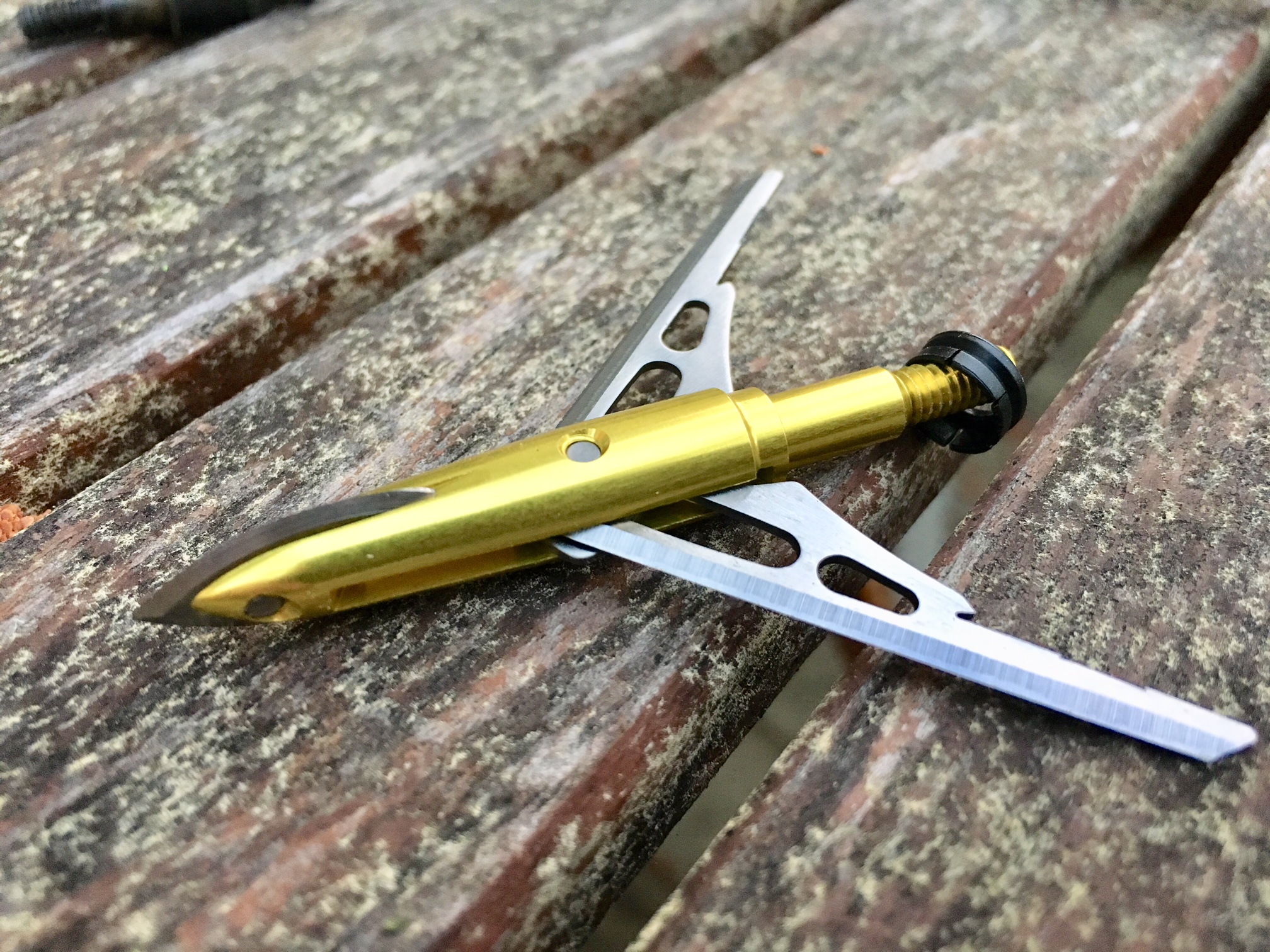 Swhacker 3 inch (150 grain)
Type: Expandable 2- blade
Cutting Surfaces: 3 inch
Sharpness out of the package: Cut paper with no issue.
Observations at 20 yards: This is probably overkill for turkey, but it great at 20 yards. I would expect fall-off at farther distances due to the added weight.
Penetration on Rinehart Block: Not surprising, this head finished atop the field for penetration. Chalk it up to the added weight, sharp blades and streamlined design. However, I couldn’t tell if the blades opened.
Damage: The blades didn’t open (from viewing the small wound channel and the cut marks on the block target after a pass through. It actually had its path altered when it glanced off a chicken leg
Durability: No damage to the blades, but as mentioned they didn’t open. The blades may require heavier targets to help open the blades. The rubber band will need to be replaced. 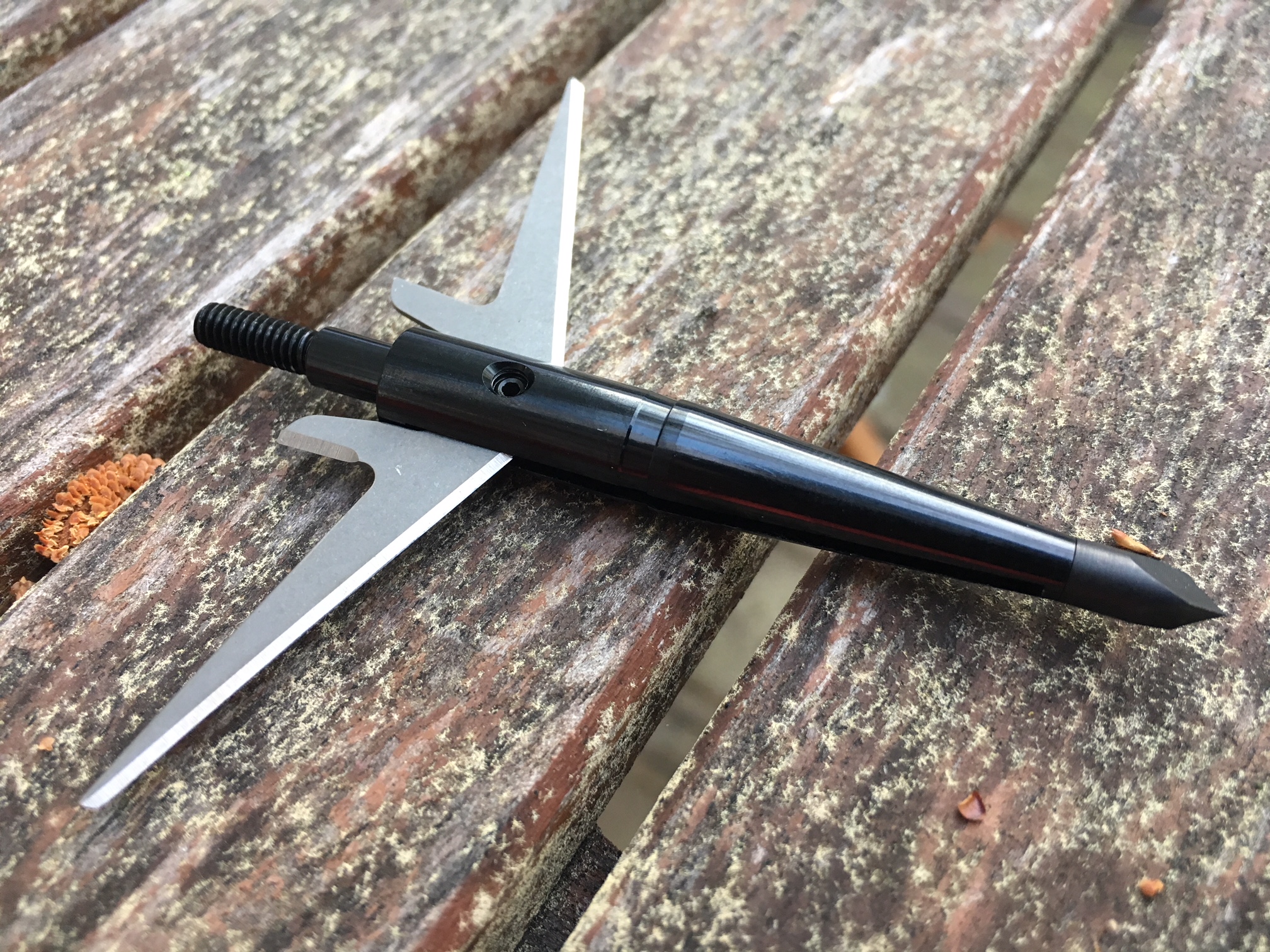 TruGlo – Mechanical 4-Blade
Type: Expandable 4-blade
Cutting Surfaces: 1 3/4-inch cut diameter
Sharpness out of the package: Similar to the other Backflip, the stainless blades and the tip of the titanium ferule were sharp.
Observations at 20 yards: This mechanical hit within an inch of a field point and was quieter than expected.
Penetration on Rinehart Block. The extra moving parts on the blade seemed to result in it finishing seventh out of the nine broadheads.
Damage: The blades cleanly cut through a leg bone and left “+” cut all the way through.
Durability: The blades were still sharp and once cleaned of debris, it was ready to be fired again. I did have to clean it after firing into the high-density foam to ensure the blades had full range of motion. 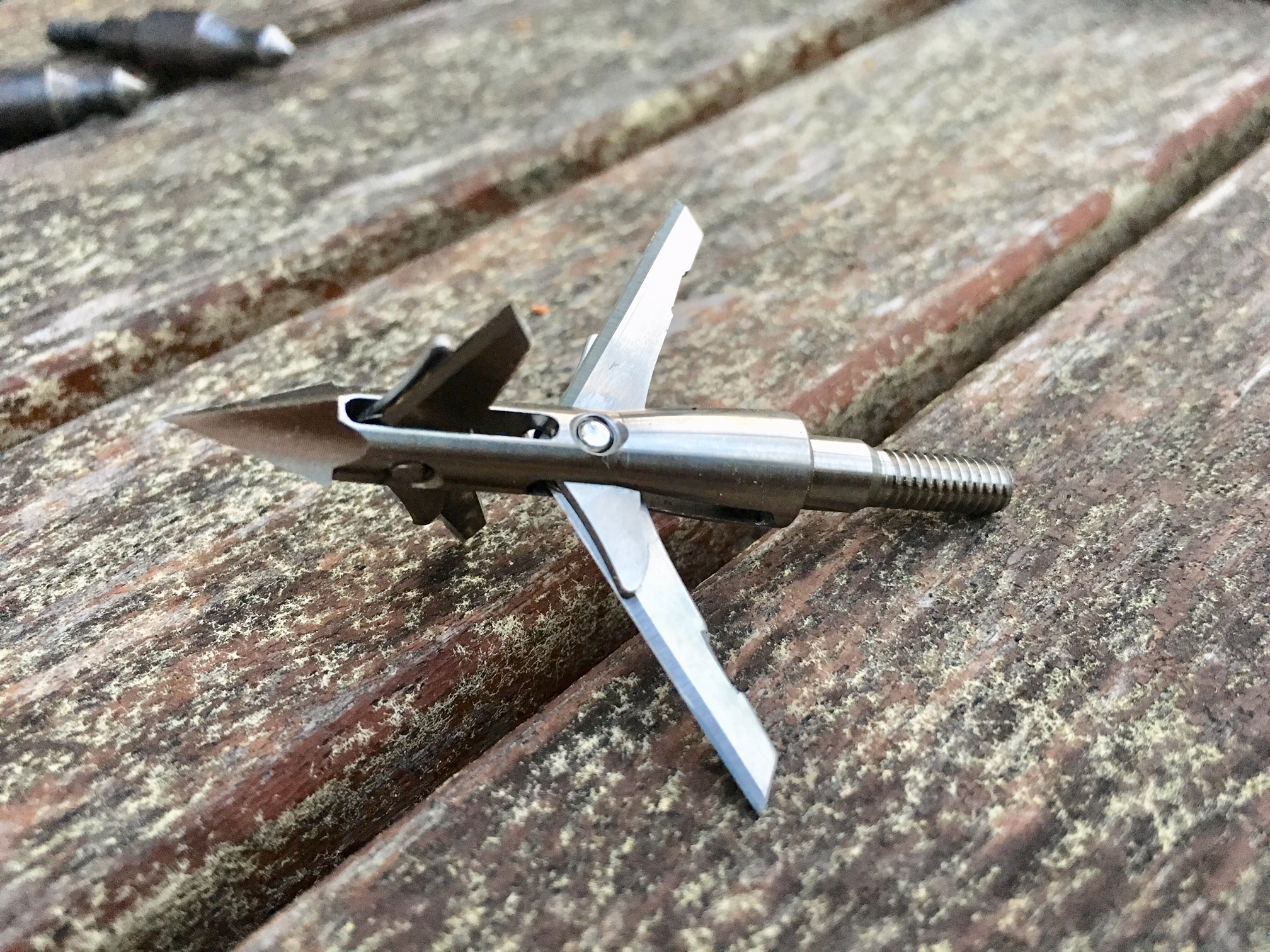