Is it turkey season yet? While we aren’t quite there, it is a week for some, and longer for others, before seasons kick off. But, the recent wrapup of the NWTF’s 44th annual Convention and Sport Show, featuring 2020’s hottest new turkey gear, has turkey enthusiasts yearning for opening day.

Here are just a few of the new decoys we spotted, or learned about, while on the show floor in Nashville. 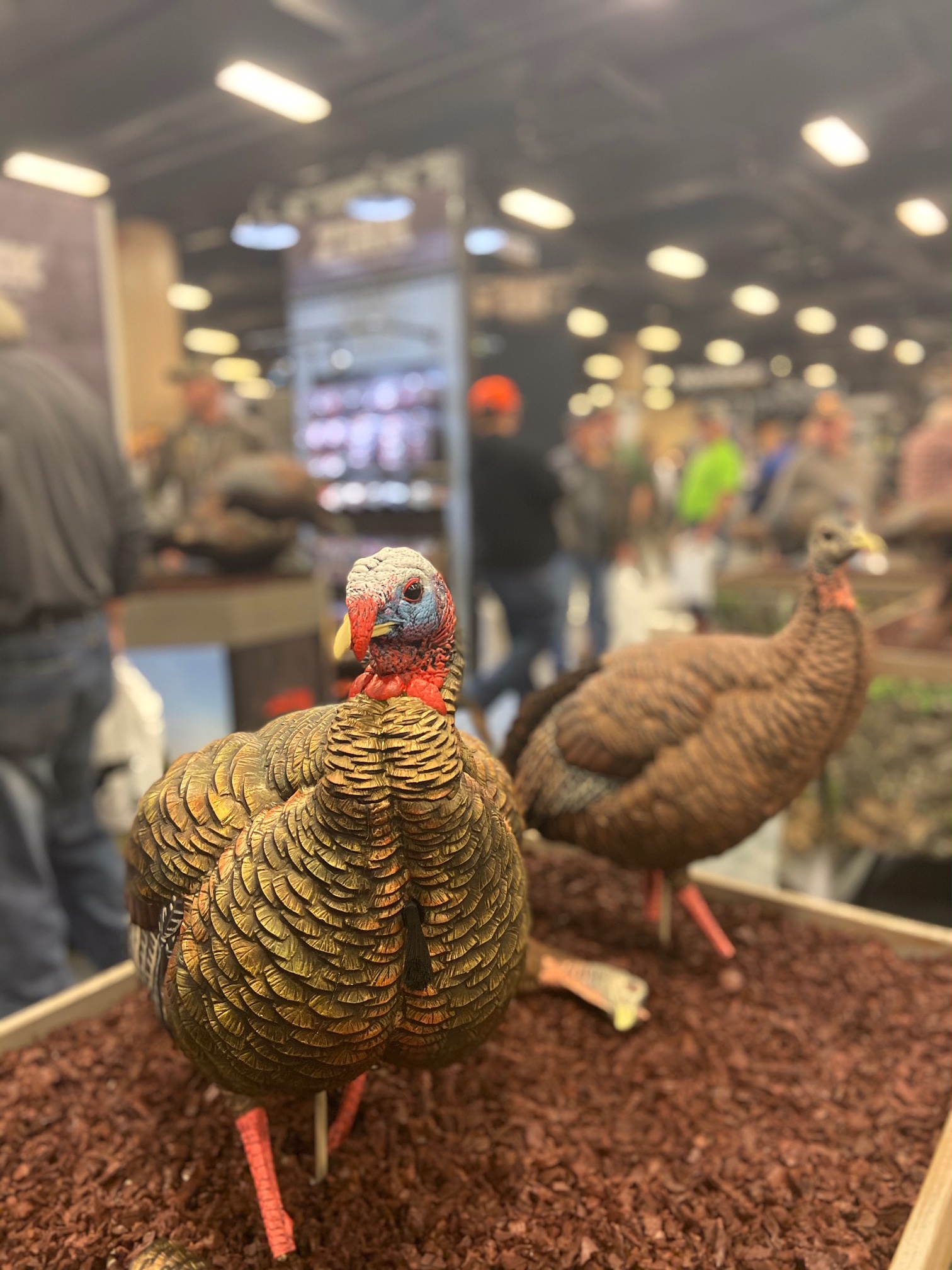 Avian-X HDR Hen
Avian-X, the Official Decoy of the NWTF, followed up its 2019 launch of the HDR (Heavy-Duty Realism) Jake with this year’s anticipated unveiling of the female version, the HDR Hen. Similar to last year’s model, the hen version includes two swappable head positions — the more aggressive pose and also the more relaxed posture — allowing for a quick change in set-up style.
MSRP: $149 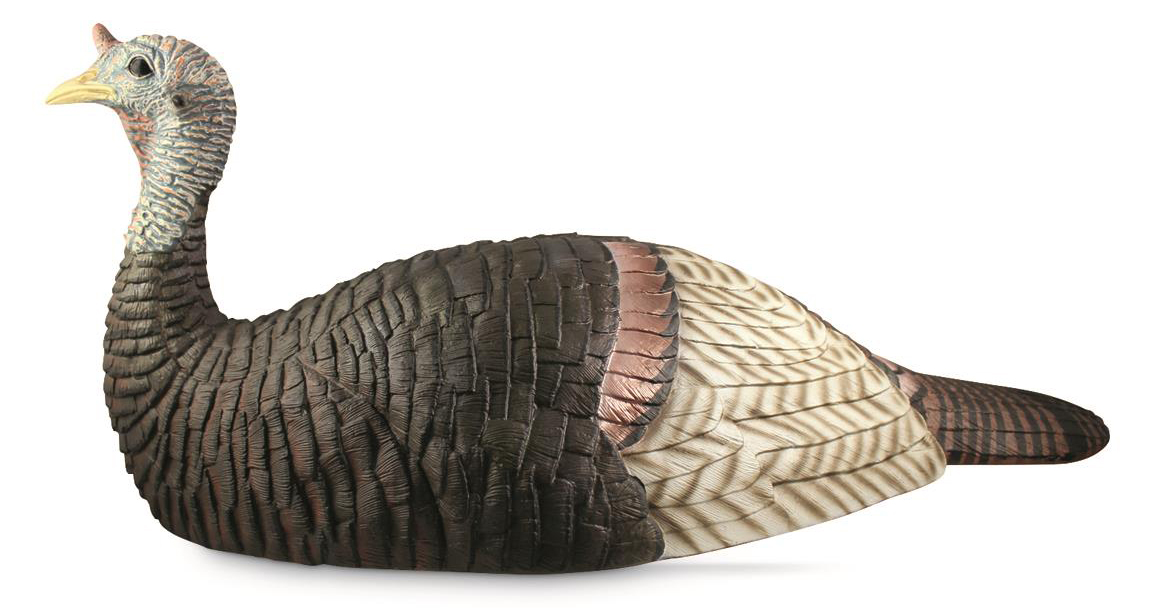 The Grind Lay Down Hen
While not a new concept, the Lay Down decoy from The Grind does expand its line of decoys to better suite all hunting situations. Pair this decoy with last year’s jake decoy, or The Grind’s other new-for-2020 quarter-body strutter, to simulate a breeding scenario. With no need for a stake, this decoy sets up in a hurry.
MSRP: $49.99 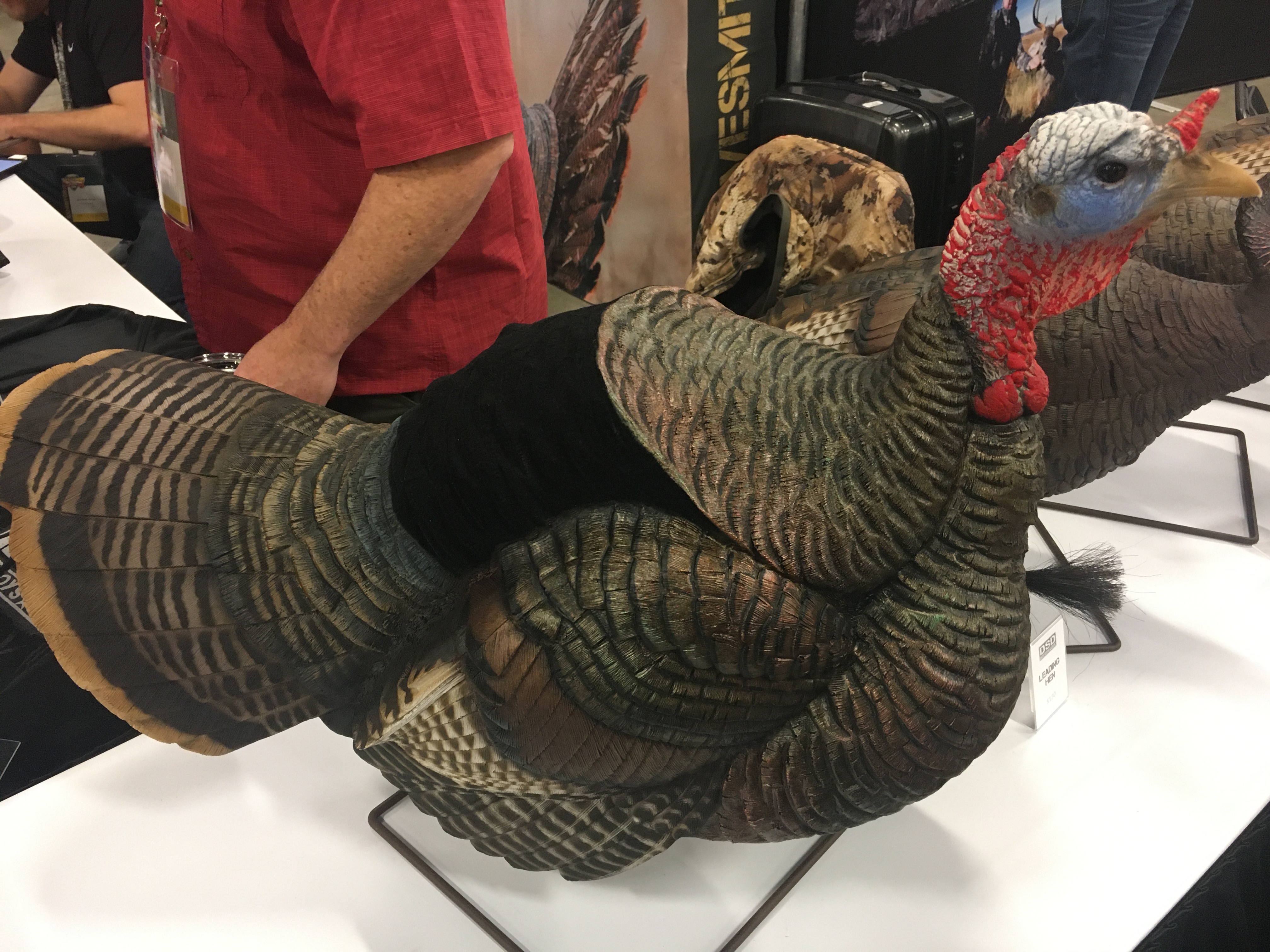 Dave Smith Decoys Posturing Jake
This new for 2020, hard-bodied jake decoy is sure to ruffle the feathers on dominant toms. In a half-strut pose with an outstretched neck, this postured jake provides an aggressive look in a decoy that doesn’t require stepping up to a full-sized strutter.
MSRP: $199.95 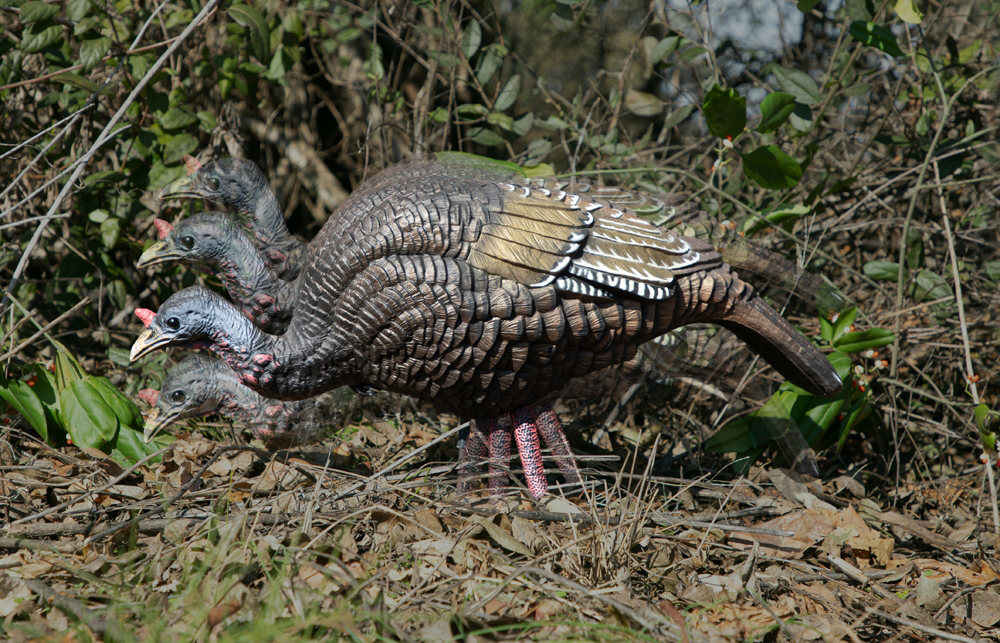 Higdon XS TruFeeder Motion Hen
This new hen from Higdon provides life-like “bugging” motion. Easily activate the hen’s motion upon seeing a bird check out your decoy spread using a four-channel remote control. Higdon also released a motion breeder pair in 2020. Make sure to read the regulations in your state to determine if electronic decoys are permitted for hunting purposes.
MSRP: $199.99 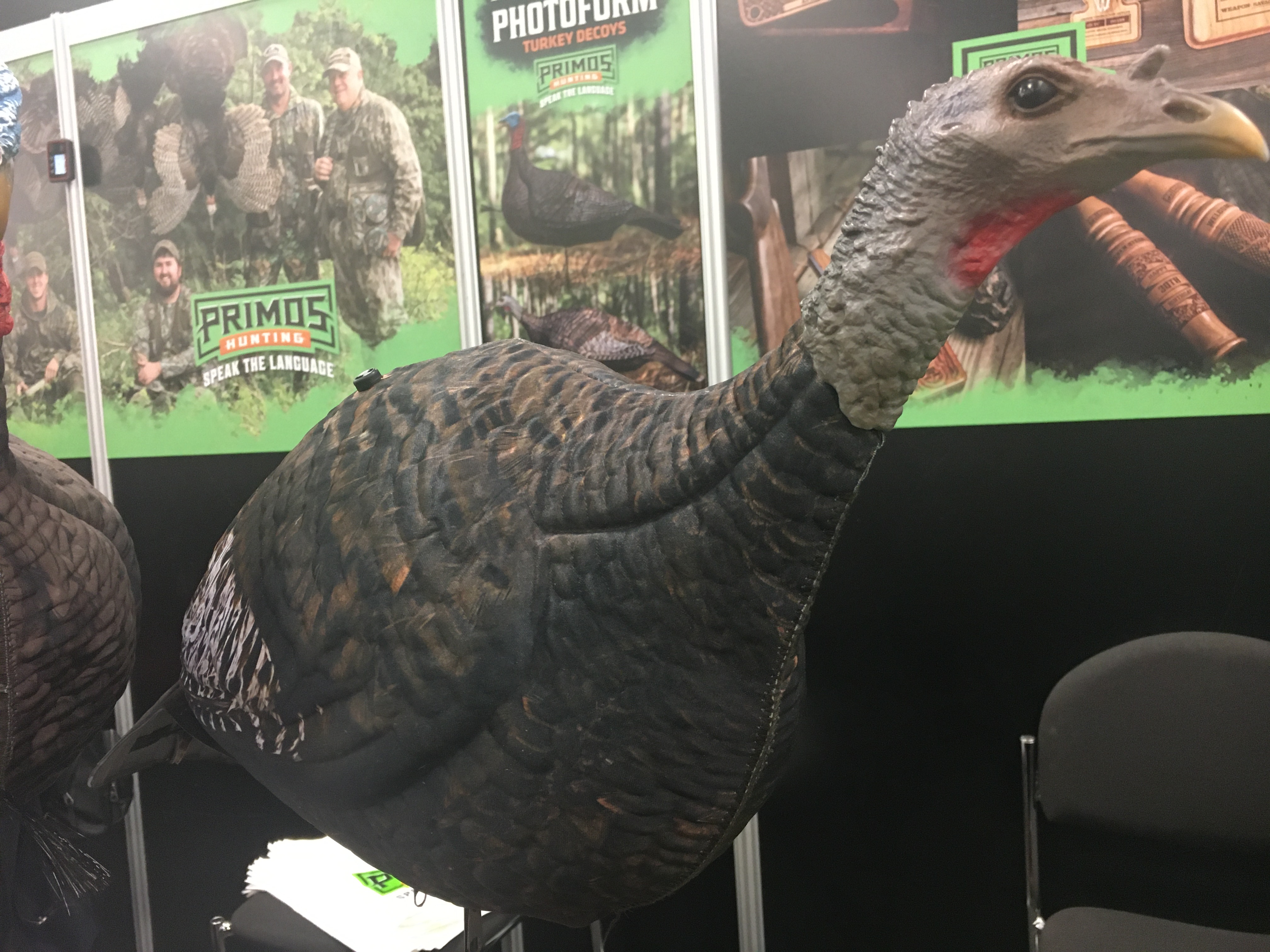 Primos Photoform Series
If you thought the new Primos offerings looked realistic, it is because they printed a photo of both hen and jake turkeys on the collapsible molded form decoys. Adding to the realism, both models feature a realistic looking head, modeled after taxidermy forms.
MSRP: $83.99 (hen); $94.99 (jake) 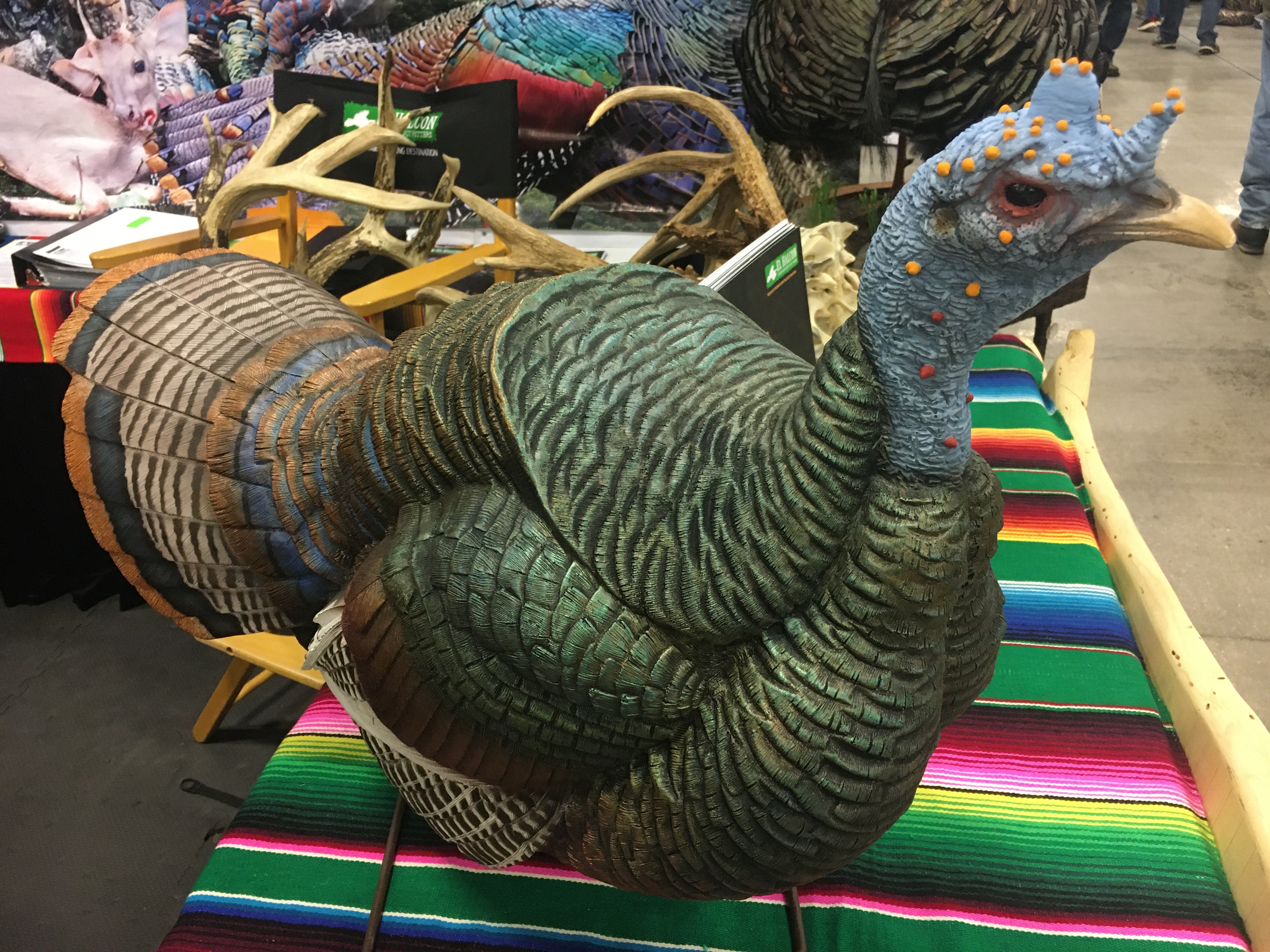 Bonus – DSD Ocellated
While not available for purchase, this decoy quickly caught my eye while roaming the floor in Nashville. This was a one-off project created for one of the outfitters covering hunts in the Yucatan, but the resemblance to DSD’s Posturing Jake was easily noticeable. Not sure if it will ever hit the market, but I’d be tempted to pick one up just as a fun show piece.