While fall-turkey hunting doesn’t exactly have the same allure of spring gobbling action, autumn is a great time to explore the turkey woods. Obviously, fall hunting sometimes requires different tactics than usual spring hunts. If you want to consistently succeed at hunting fall turkeys, here are four steps you can follow that have served me well.

Find Fresh Sign
While calling can lure fall turkeys within range — I’ve done it — it certainly isn’t my go-to strategy. I generally hunt fall birds more like I hunt deer. I don’t often walk into the woods and listen for turkeys, although that can be beneficial intel when it occasionally happens. Instead, I look for scratch marks in the freshly fallen leaves. Turkeys feed heavily to prepare for winter, and bare spots are commonly found throughout the timber where turkeys have been tilling. So long as these areas aren’t directly underneath a roost, they can be excellent places to setup and hunt. 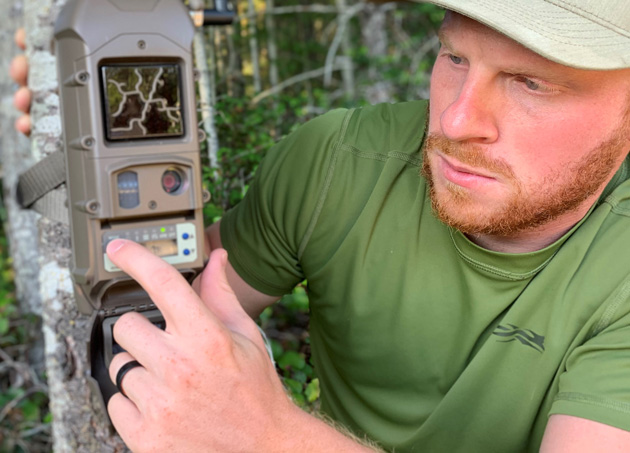 Use Trail Cameras
Turkeys often use the same food plot(s) you’ve created for deer. In many cases, deer plots are located in the timber, and there isn’t always a good way to scout them for turkeys without disrupting your deer program. Thus, trail cameras that you already have in place for deer can provide valuable information as to if and when turkeys are using your food plots.

In many cases, turkeys enter food plots outside of peak deer-movement times, which means that if you pattern them, you could potentially slip in and bow-kill a bird without impacting your deer season. I’d advise against using a shotgun in this situation due to the loud report.

Use a Decoy
Several times I’ve used a single decoy during fall hunts to instill confidence in turkeys to approach my setup. When targeting hen and poult flocks, I use a single Dave Smith hen decoy. If hunting toms and jakes, I’ll occasionally plant a solo jake.

I once used a strutting jake decoy on September 27 when hunting a 10-tom flock. All 10 birds charged within archery range, and I thumped one as he postured next to the decoy. My hen decoy has also brought me success.

Hunt in the Snow
One of my favorite times to hunt fall turkeys is in late November and through December once snow has fallen and birds have congregated into large flocks. Traditionally, these flocks occupy farming operations, silage bags and/or picked cornfields being their dinner table. These are some of the easiest turkeys to hunt because they demand the food that farms offer.

Farmers generally allow responsible hunters to thin the flocks, as large concentrations of birds can cause lots of damage. Further, the birds typically have a preferred area at which they daily feed. You’ll find tracks littering the area, which leaves no questions as to where you should setup. In the coldest conditions, I deploy a Primos Double Bull Blind to stay cozy and warm with the help of a propane heater.