You can build a turkey gun that covers distance and keep hunting ethics intact at the same time.

Long-distance turkey shooting is all the rage lately. It’s getting hard to pull up a turkey hunting forum or Facebook page without hearing some testosterone-overburdened hunter talk about his turkey-whompin’ turkey-stompin’ shot launcher that’ll “set ‘em to floppin’ at 60 yards every time.”

This mindset is as wrong-headed as catching a plane to Las Vegas to make next month’s mortgage payment. The situation was already bad enough when all we had to work with was lead. But then along came Hevi-Shot, Hevi-13 and all the rest of the heavier-than-lead tungsten blends. Now we have TSS (almost pure tungsten,) with a specific density nearly twice that of lead.

And turkey hunters — human beings at their core and therefore flawed — have reacted predictably: instead of bragging about their 50-yard guns with lead or Hevi-Shot, many are now crowing over their 60-yard guns. And, unbelievably, even beyond that.

Don’t misunderstand. I’m all for turning a turkey gun into the most lethal tool it can possibly be, but there’s only so much you can do in that direction with a shotgun. It is not a rifle; it cannot drive tacks. It is designed to hit moving objects at fairly close range, and it does so by using a whole bunch of small projectiles and spreading them out.

There are two inherent problems with long-range shooting. First, any time you pull the trigger on a shotgun, you are setting in motion a random act. No two patterns will ever be alike; there are going to be holes and thin spots in even the best of them, and it doesn’t take much of a hole to miss a turkey’s cranium and neck bones. (Picture a quail egg perched on a Bic pen. That’s your kill zone.) The farther from the muzzle that swarm of shot travels, the larger those holes get and the thinner those thin spots become. There are no exceptions to this rule.

The second problem is that the farther a projectile travels, the less energy it retains. The experts say an individual shotgun pellet must retain 2 foot-pounds of energy in order to reliably break the bones in a turkey’s head and neck. If you don’t break those bones, you don’t kill that turkey; it’s just that simple. Not DRT (Dead Right There) anyway, and since it’s rare that a turkey leaves a blood trail and there’s no more sickening feeling than having a seriously wounded gobbler escape — trust me here — the desirable outcome with every shot is a DRT turkey.

We’re not going to turn this into a boring ballistics discussion, but here’s a brief example to drive home the point: At 40 yards, No. 6 lead shot retains 2.3 foot-pounds of energy. That’s plenty to break bones and kill your gobbler, assuming your aim is accurate. At 50 yards, though, the retained energy of that same No. 6 pellet drops to 1.8 foot-pounds. If you’re lucky enough to punch one of those No. 6s through an eyeball and into his hickory-nut-sized brain, you’ll kill him every time. But a turkey’s eyeball is no bigger than an M&M, and that’s not much of a target. If you shoot at a 50-yard turkey with lead 6s, get ready for a footrace with a bird that, even wounded, can outrun you.

OK, fine. Substitute a bigger shot size and a heavier-than-lead alloy and the numbers shift in your favor. But you’re trading pattern density for little gain in effective range, so in the end, the result is the same. Beyond a certain point downrange, the arithmetic inevitably turns against you. Foot-pounds of energy per pellet decreases with each additional yard and so does the density of your shot swarm. Neither of those things is good. So, the way it works out is, for most shotgun loads and types of shot, the magic, no-cripples-if-you’re-on-target distance is somewhere around 45 yards. Maybe 50.

Sure, TSS is wonderful stuff. Out to 50 yards, a No. 9 TSS pellet has the same lethality to turkeys as No. 5 lead, and with TSS you get more than twice as many pellets per ounce of shot (about 360 TSS 9s per ounce vs. about 160 lead 5s.) Because TSS is so hard, there’s almost no deformation of the pellets as they accelerate and travel down the barrel. Round shot flies truer than lopsided shot, so a TSS pattern has few of those erratic flyers that are so common with lead.

With all that said, TSS isn’t the miracle many of today’s turkey hunters seem to think. Yes, it helps make denser patterns due to the factors just mentioned, and a denser pattern is a longer-range pattern, up to the point where that critical 2-foot-pounds-per-pellet thing falls apart.

But since we are, as previously mentioned, flawed human beings, the major push over the past decade or so is bump our “iffy” shot distance from 40-55 yards out to 60-70 yards. Again: wrong-headed mindset. 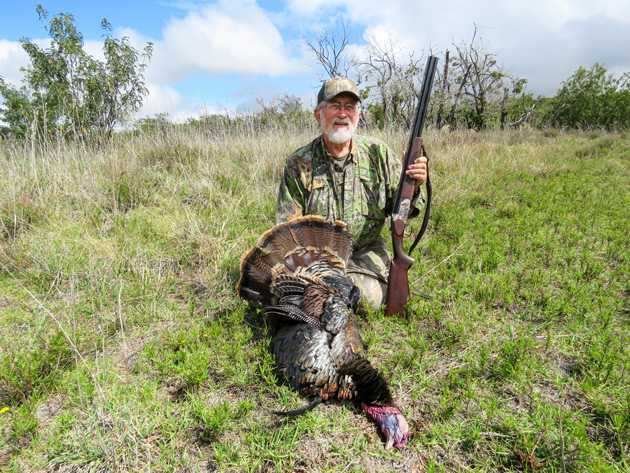 Turkey hunting, when you knock all the feathers off it, is a close-range endeavor. It’s not necessary (nor particularly desirable) to call them close enough to spit on, but it’s an undeniable fact that a gobbler at 25 yards produces a bigger adrenalin rush than the same gobbler at 70 yards. For that reason alone, it’s worth the effort to bring him in close. But even more important than the rush is the fact that he’s much more killable at that range, despite what anybody tells you about their 70-yard gobbler buster.

The wild turkey gobbler is the most magnificent game bird in North America, and he deserves nothing less than a quick, clean kill when the time comes to pull the trigger. But the time to pull the trigger is after that gobbler has come within the 40-yard mark, not when he’s so far out there the bead on your barrel covers his entire body.

Yes, certainly, do what you can to improve the downrange performance of your turkey gun. Have the forcing cone lengthened and polished; use a telescope or one of the dot-type sights to improve the point of aim; test loads, shot sizes and after-market choke tubes to determine what combination works best in your gun. But remember, it’s a shotgun and not a rifle. Your goal should be to make it absolutely, no-question, hands-down lethal inside 40 yards or so, not to make it a 60-yard gun.

Trust me again: The drive back home after you’ve left a seriously-wounded gobbler in the woods for the bobcats will be one of the longest trips you’ll ever make. I wouldn’t wish it on anybody.