Jeremiah Cluesman admits that he’s fascinated with the details of leaves, feathers and other parts of wild game. That might seem like an odd obsession for a mechanical engineer, but it’s served him well in his other pursuit: a champion decorative call maker.

So well, in fact, that Cluesman, of Bybee, Tennessee, recently won Call Maker of the Year honors in the decorative duck and turkey divisions at the NWTF’s 2021 Grand National Callmaking Competition. That rare double triumph — believed to be the first in the contest’s history — put Cluesman’s name among the greats of the callmaking craft.

“It was pretty cool,” he said. “I’ve still not gotten over it. One of my goals as a competitive call maker was to win the best of show in the duck and turkey call in the same year. And it was just cool that I was able to pull that off.” 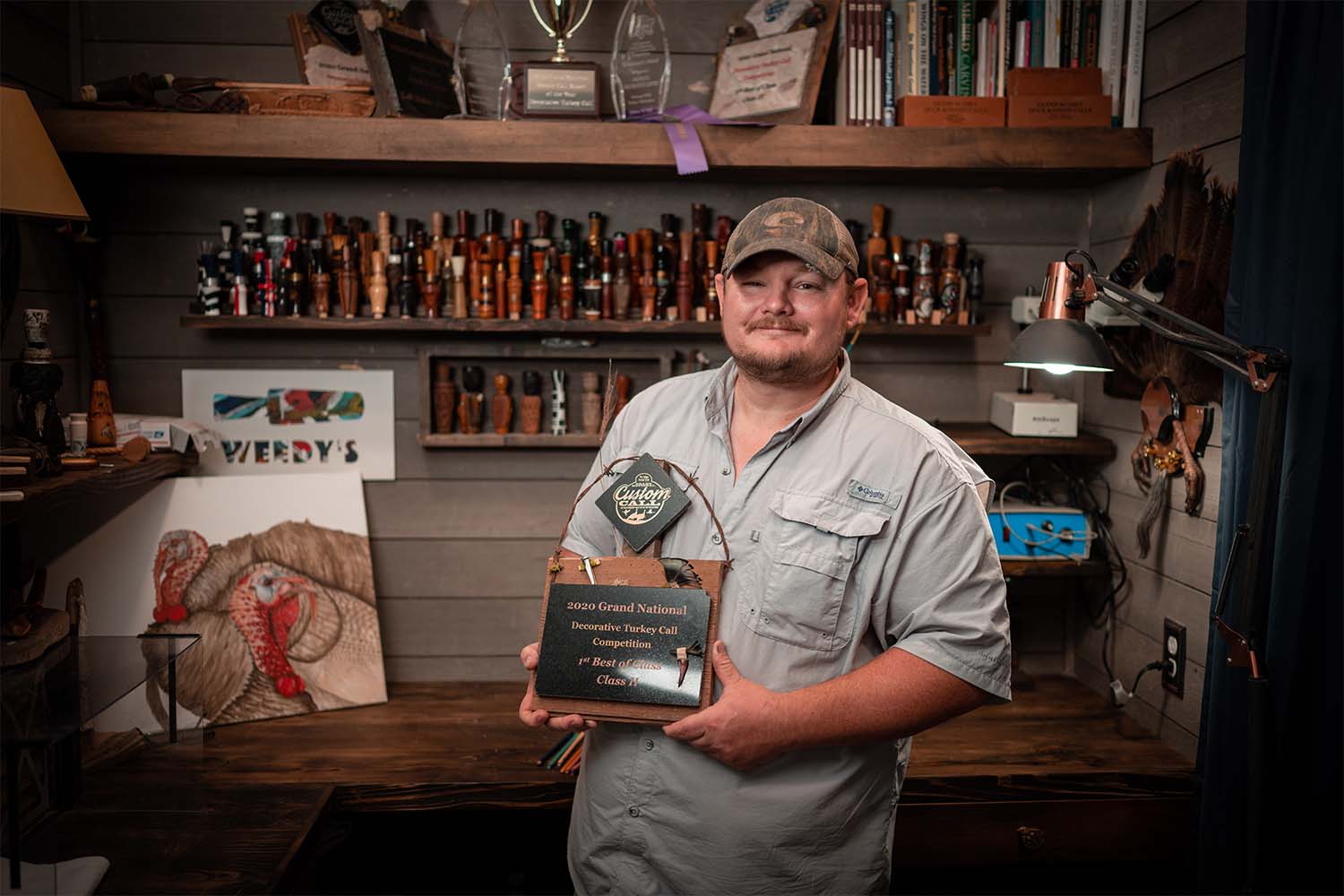 The Grand National Callmaking Competition is typically held in Nashville, Tennessee, during the NWTF Convention and Sport Show. But with the NWTF holding a virtual convention in 2021 to help prevent the spread of COVID-19, the NWTF held this year’s contest July 31 through Aug. 1 at its headquarters in Edgefield, South Carolina.

Some of the best call makers in the country sent custom calls to be judged by panels of turkey and duck call experts. Judges scored more than 700 calls in four categories on several criteria, such as artistic beauty, craftsmanship, ingenuity, sound and more. Calls were then auctioned online to raise critical funds for the NWTF’s conservation and hunting heritage mission.

It was described as a “one-of-a-kind piece, crafted from a combination of elk antler, whitetail antler and buffalo horn. The bell has been decorated with wood burning. The included stand is made from black cherry burl.” 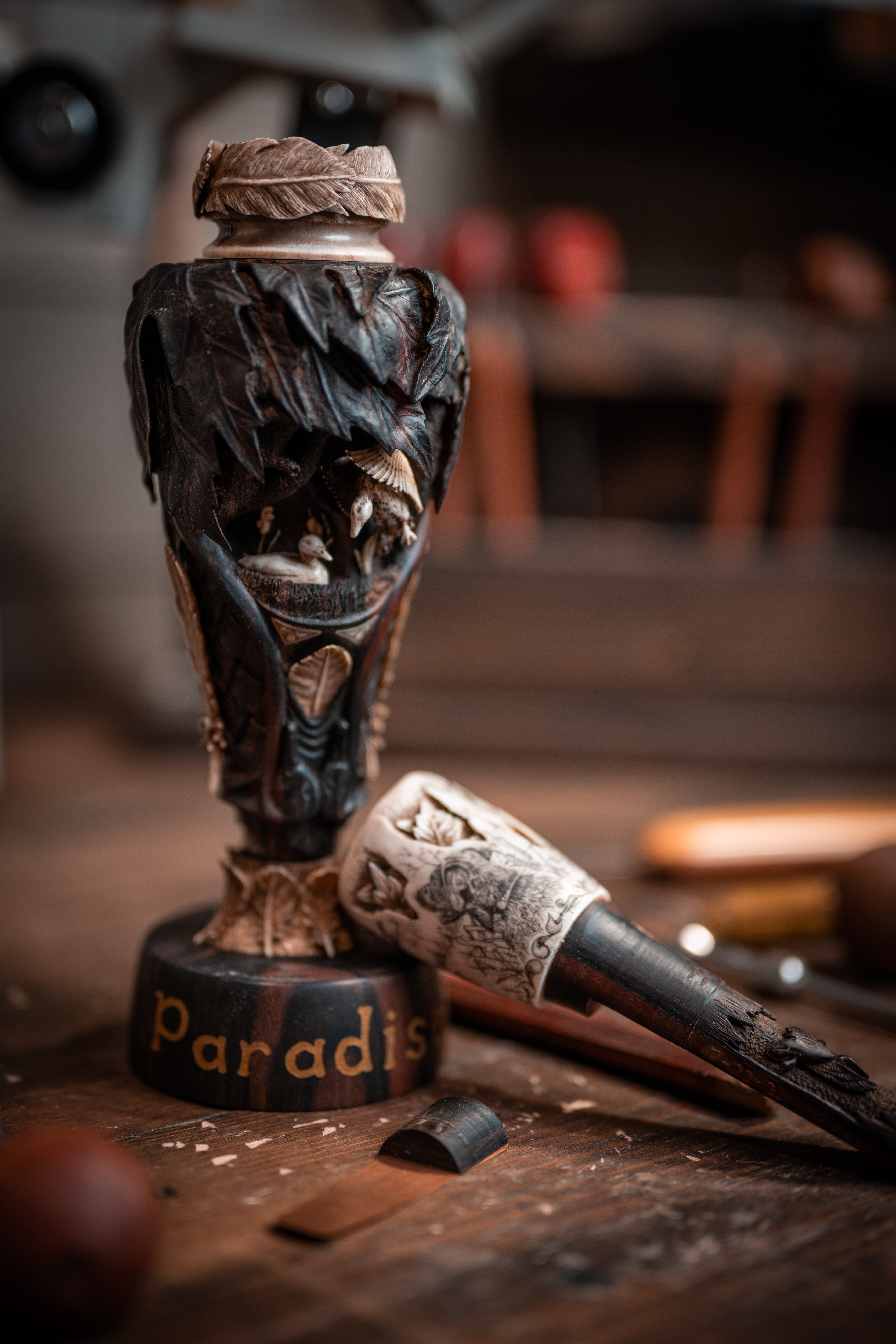 “I wanted to stick with natural materials as much as I possibly can,” he said. “It just has more of an authentic feel to me. I like working with antler quite a bit. I think it takes a lot of art forms really well.”

His winning decorative duck call won the Division 3 (Decorative Duck and Goose) Grand National Call Maker of the Year Award. Cluesman’s description said: “This is my idea of paradise: a home on the water full of wildlife. This one-of-one creation is made from Macassar ebony and elk antler, with heavy carving and scrimshaw.”

Success Is in the Details. A true one-of-a-kind piece

“My duck call entry last year was kind of a similar shape,” he said. “I wanted something with better contrast. Every piece that I do, I go into it with a little bit of an idea of what I want to do, but most of it’s kind of a free-flowing thing. It’s kind of like a Bob Ross painting. You think, well it would be cool to have this kind of leaf over here or a feather. It’s one way to make sure all of your pieces are different.”

Having accomplished so much, you might think that Cluesman had been making calls for decades. Actually, during his younger years, he never paid much attention to calls, other than working models he used while hunting. That began to change when he started collecting duck calls.

“Through that, I discovered decorative duck calls and then turkey calls,” he said. “I liked art quite a bit when I was younger, but then I had about a 10- to 12-year span when I didn’t dabble in it. Seeing those calls and wanting to have some for myself inspired me to start trying to create one. I’d create one and share it with friends. They’d say it was cool. One thing led to another. I’ve not been carving or making calls for a lot of years, but I’ve put a lot of hours into it.”

Cluesman made his first calls in 2015. In 2016, he entered calls in the Grand Nationals contest and began to associate with and learn from veteran call makers.

“It was awe-inspiring,” he said. “I didn’t imagine I would win back then. I knew I wanted to, but not necessarily to beat the guys I looked up to so much. I wanted to be able to compete with them on the same level, and after a few years of doing it, I got into the mindset where I feel like I’m competing with myself every year to put something out there better than the year before.” 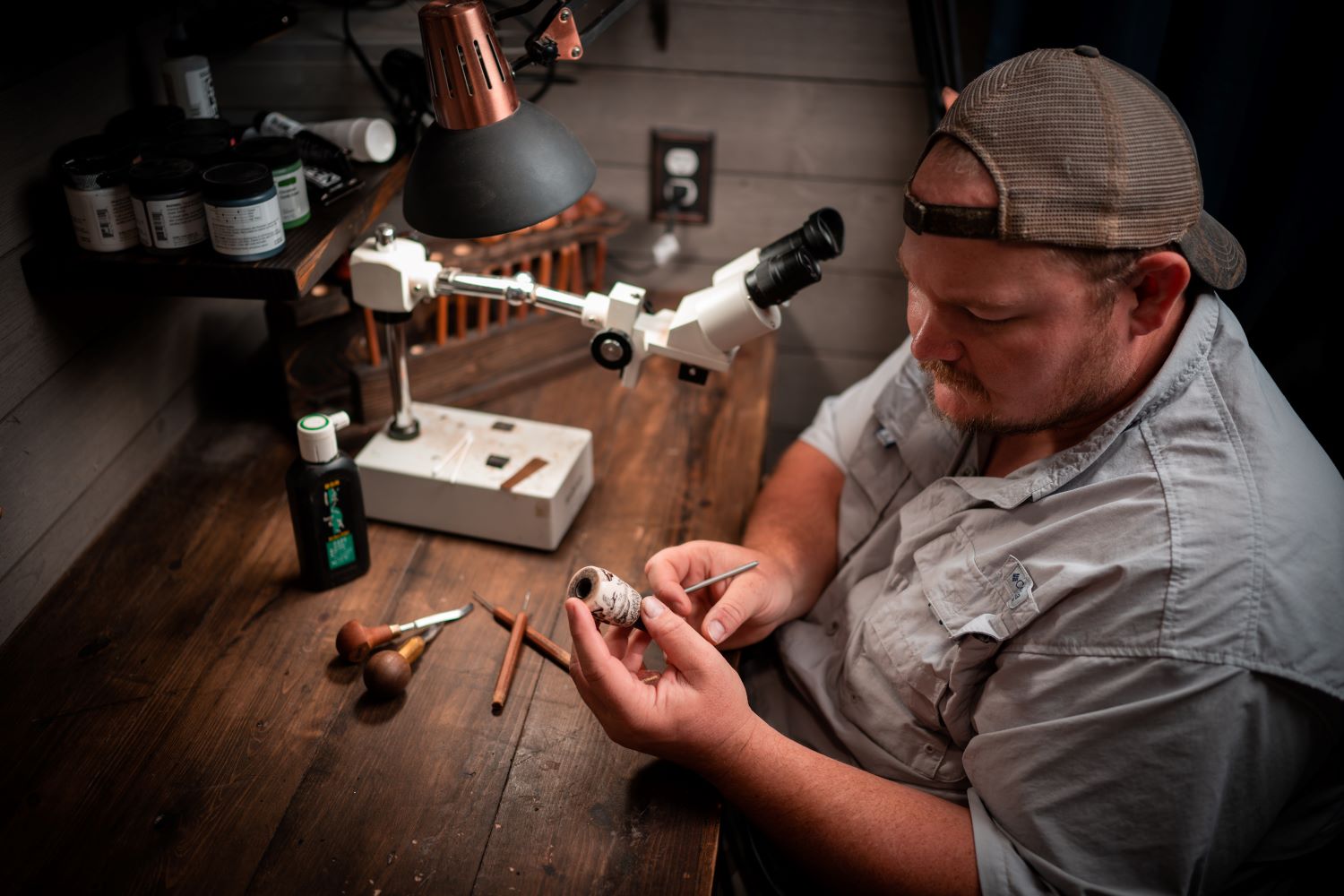 He’s made many friends through the competition and has looked to fellow competitors — such as Tim Oldham Jr., Dave Constantine and Irving Whitt — for inspiration. Being recognized by his peers means as much or more to Cluesman as actually claiming the 2021 titles.

“That in itself is top honors for me,” he said. “I feel like I’m right up there on top of the mountain with those guys. They’re hugely responsible for this. I’ve made quite a few friends in it. I’ve had very few negative experiences.”

“I can’t write big checks, but I do have the ability to contribute in that manner,” he said. “That’s very pleasing.”

Of course, winning top honors spawns an obvious question for Cluesman: What can he do to top this? He admitted that it sometimes seems daunting to come up with fresh, innovative ideas, but simply working on pieces often sparks the creative process.

“It’s taken a few years to really find my stride and my identity in the artistic side of it,” he said. “It seems like every new idea spawns two or three other ideas. And I am thinking about next year. I definitely have things to build on.”

No doubt, fans of great art and decorative calls can’t wait to see what he comes up with next.