1. Having all the required or desirable elements, qualities, or characteristics; as good as it is possible to be.

That is a high standard. Not many things in life are perfect. In fact, the occurrence of perfection is so rare that when it happens, it’s more than memorable. It’s meaningful. A recent opening day in Texas met that high standard and was as good as it is possible to be.

Healthy Habitats
The Hill Country region of Texas is located in the Edwards Plateau, and depending on which direction you are traveling, represents the beginning or the end of the American Southwest. Punctuated by rugged hills and a thin layer of topsoil with exposed rocks and boulders, the predominant trees are ashe juniper and Texas live oak. It is also punctuated by high numbers of Rio Grande wild turkeys. 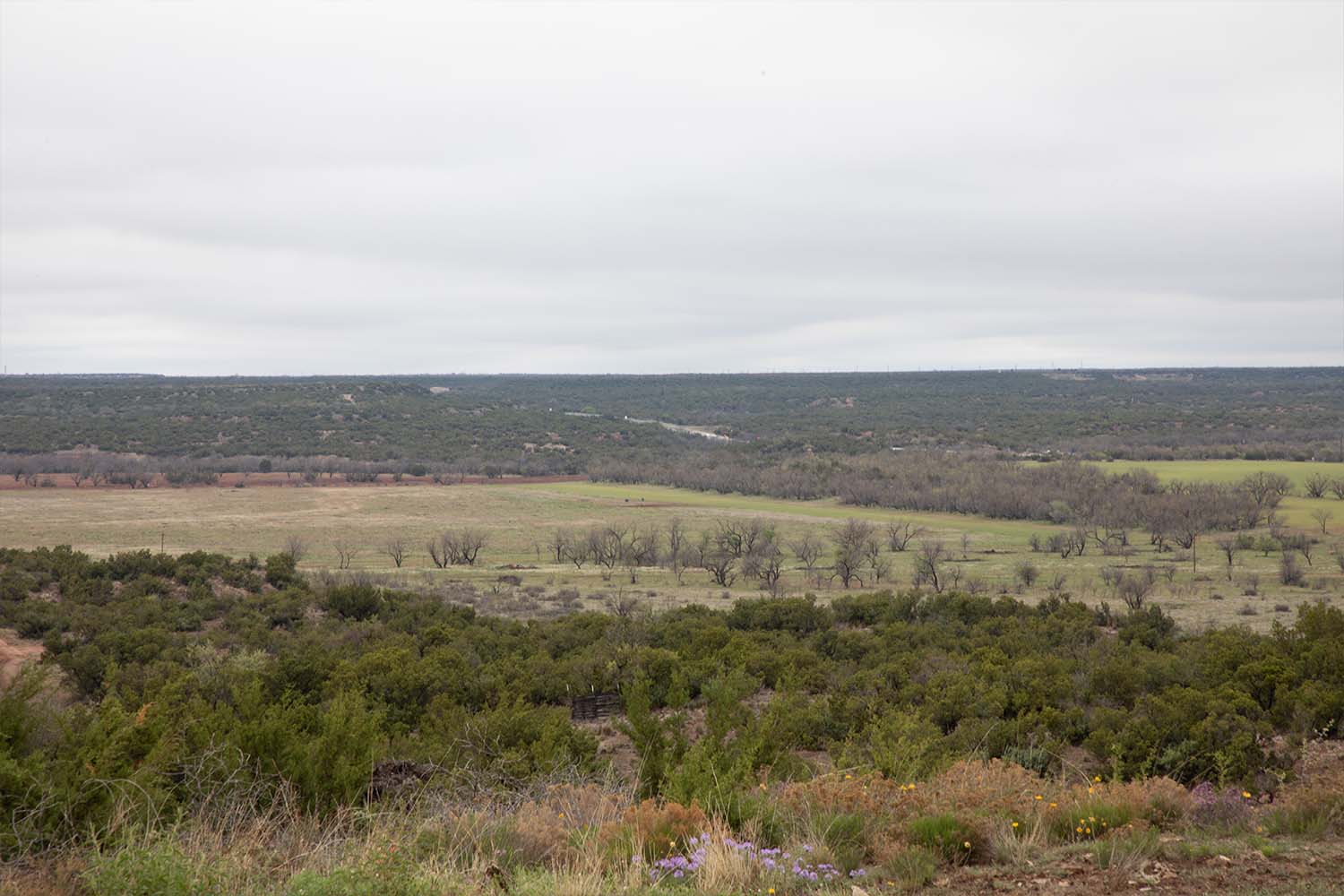 While not dramatically beautiful like our Rocky Mountains, or an inspiration to ponder the infinite, like our Atlantic and Pacific coasts, the region has captured my fancy as few other places in America have. The beauty is subdued and subtle. However, there is nothing understated about the wild turkeys that live there. They are loud and flamboyant. I love to hunt them and have been doing so for more than three decades.

The farm where I was hunting them on the opener last spring is in Hill Country, near Killeen. It is owned by Gerald Farris.

Gerald and I met in the 1980s, long enough ago that I cannot recall the specific year. I can recall the circumstances. I was a turkey hunting client in a camp where he was guiding and cooking for an outfitter out of El Dorado. As in any turkey camp, there was a lot of down time, providing multiple opportunities for conversations that went beyond the scouting reports on turkeys. It was during these conversations that a bond developed.

We discovered commonalities and shared values in addition to our love of hunting. Birding, politics, cooking, philosophy, a curiosity and fascination with all things natural … these were the fuel not only for our conversations, but also for a lasting friendship. Lasting is an understatement. Our connection has spanned the decades and has been an enduring blessing.

Gerald’s friendship and generosity are the reason I visit him on his farm two or three times each year. Also, because Rios thrive on his property. They do so because he cares about managing the land to create a healthy habitat for wild turkeys. It’s semiarid country, so he built a catfish pond that has water year-round. He cleared the ashe juniper to open up some glades that provide nesting cover and an abundance of insects for growing poults. He protects his mature Texas live oaks to ensure that the birds have plenty of roost sites. He also manages predators, particularly nest predators. This is a perfect place to be on opening day, and I was beyond happy to be there.

Healthy Harvests
For me, virtually every turkey hunt begins two days before I pick up my shotgun. I am committed to scouting, with a firm belief that it is a critical success factor in creating that scene that is so popular in post-hunt photos. You know, where the gobbler is slung over your shoulder, with tail and wings fanned out, as you walk away from the camera?

Honoring that commitment to scouting, the Friday before the opener found me in a familiar listening spot on the western edge of Gerald’s farm. The weather was ideal; cool, low winds, clear skies. As I waited in the dark, I was hopeful and expectant. I was not disappointed. Moments after the first cardinal started singing, the chorus began. Gobbling to the east. Gobbling to the west. Gobbling to the south. Nothing to the north, but let’s not quibble. At least six birds were close and loud in three different directions, all huntable in my mind, and I snuck away before anything flew down.

Saturday morning the weather conditions were identical to Friday, and I would have bet anyone foolish enough to take the wager that I was about to be serenaded again, this time with shotgun in hand and decoys set up. I am glad there was no one around to place a bet. Silence greeted the graying sky, and I was once again reminded of how capricious our grandest game bird can be. Finally, just before fly down time, I heard a single gobble to the east, 200-300 yards away. Close enough.

I called conservatively, at first, becoming more aggressive as time ticked by without a response. Twenty minutes after hearing his single gobble, he answered some fast cutts and yelps with another single gobble, on the ground, distance cut in half. Twenty minutes after that, he was there, emerging from behind a juniper, in range, staring down the decoys. It was 7:58 a.m. when I walked up on him to still his flopping. A heavy 3-year-old, I was thrilled with this reticent tom, who gobbled only those two times during the entire engagement.

Still early, I decided to stay put for a while and see what might develop. I knew there were more turkeys in the area, even if they were being quiet. At 9 a.m., just when I was thinking of moving, multiple birds cut me off in mid-yelp no more than 150 yards to the south. Those gobblers and I conversed for more than an hour, and when I finally saw them at 100 yards, all three were in full display. They never closed, eventually walking off to the east, after giving me everything I wanted except the trigger pull.

I stuck it out for about 30 more minutes after they left, then began packing up my gear to go see Gerald for a late breakfast. Mask down, gloves in my pocket, mouth call in its case, I caught movement to the north and froze. Three hens and two strutting gobblers were making their way up the hill to my set up. Silent as church mice, I had no idea they were in the world. I believe I used up all my luck for this season and the next as they passed behind a giant juniper, allowing me to raise my shotgun. The hunt ended with another 3-year old down, feathers shining in the sun as I admired the golden iridescence unique to these beautiful Rio Grandes. 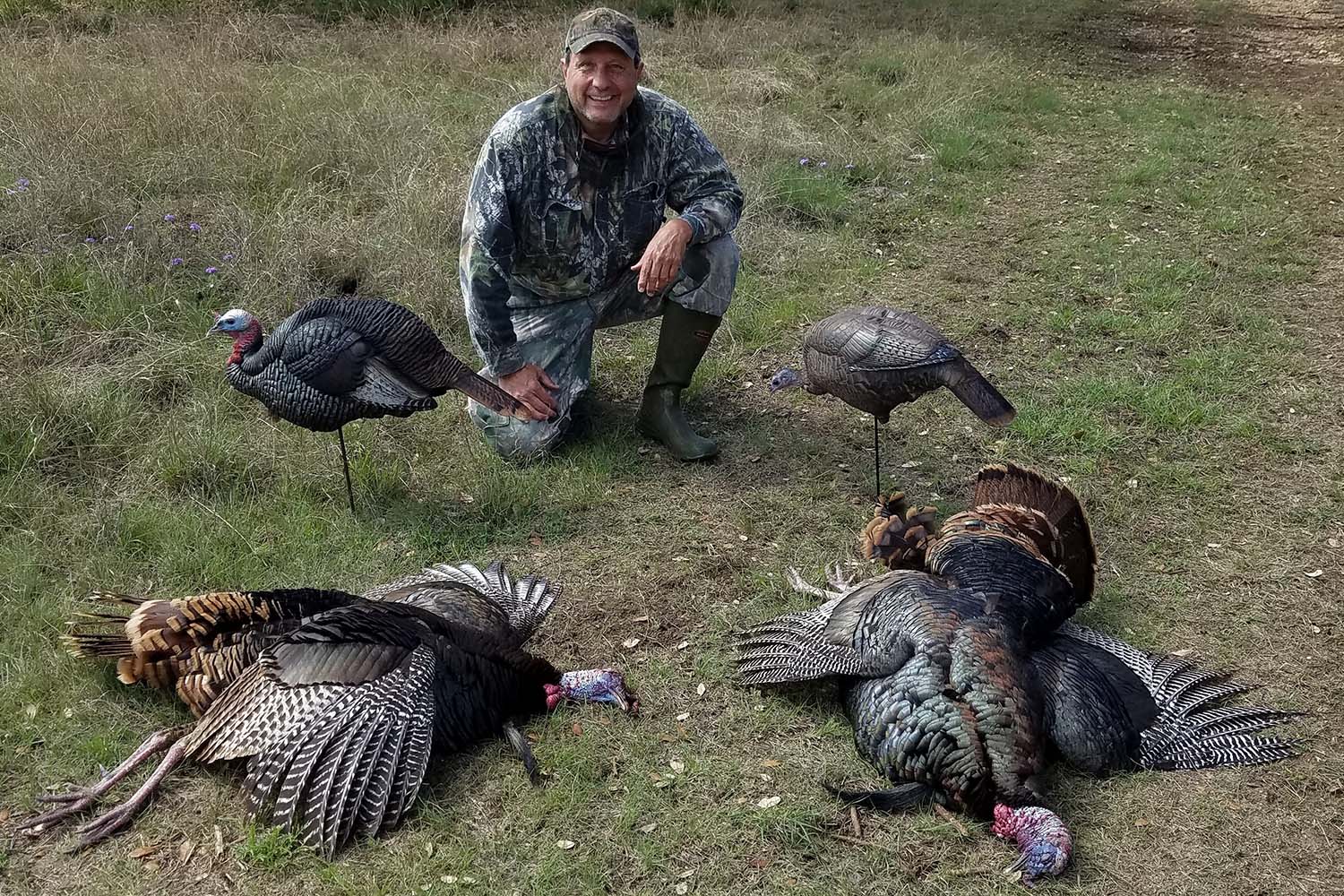 The Meal
A tradition on any hunt with Gerald is to grill the harvested game in his Texas smoker. It’s a tradition I embrace. At heart, Gerald is a locavore (a person whose diet consists only or principally of locally grown or produced food). He is happiest when he is preparing whitetail backstraps or wild turkey breasts that were hunted on his own property. He was about to be really happy.

We pulled the breasts from both birds, froze two and thoroughly rinsed the other two. After patting them dry, we applied a favorite dry rub liberally on every surface area. I use the word liberally with precise purpose. Gerald likes his seasonings and is not shy about using them.

When the mesquite and live oak coals were ready, we cooked the breasts for just under one hour. Served with a medley of vegetables and Gerald’s famous white gravy, the turkey was moist, tender and smoky. It was so good I felt slightly lightheaded.
Indeed, the desirable elements — the habitat, the harvest and the meal ― all came together to create a perfect day, one as good as it is possible to be. Any time I choose between now and the grave, I will be able to close my eyes and relive it. Perfect.